Putin was informed about the real situation in Donetsk 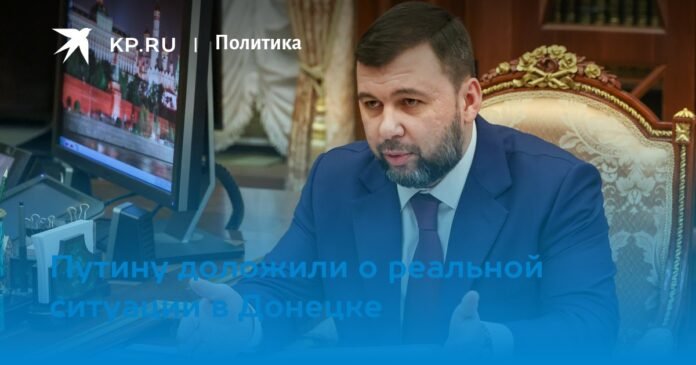 Acting head of the Donetsk People’s Republic Denis Pushilin during a meeting with Russian President Vladimir Putin in the Kremlin. Photo: Mikhail Klimentyev / Press Service of the President of the Russian Federation / TASS

After an evening meeting with the acting head of the LPR Pasechnik, Vladimir Putin received the leader of the DPR, Denis Pushilin, in the Kremlin. Both Novorossiya officials received the Order of Merit to the Fatherland, 1st degree, from the president on Tuesday. Pushilin first came to the office of the head of the country for a report, as an ordinary regional leader.

– It is clear that in Donetsk the security situation is no less acute, and perhaps even more acute (than in Lugansk – Ed.), Taking into account the intensification of the shelling of the Armed Forces of Ukraine in residential areas of Donetsk, – the president admitted it from the beginning.

Putin asked to tell how local residents are provided with housing, heat and heating. Pushilin’s response story turned out to be sad.

In Donetsk, Makeevka and Gorlovka, water is provided every third day for two hours. Communications are badly damaged, it is often impossible to open the water supply; everything spills on the floor.

– Thank you very much for the decision to build a new conduit from the Don River, – thanked the acting head of the DPR.

The Moscow authorities are helping Donetsk with the repair of communal infrastructure. But there is still a lot of work.

About heating in Donetsk and Mariupol, Pushilin tactfully said: “The situation is now closed as much as possible in the current conditions.” At the same time, many boiler rooms are not working due to lack of water and electricity.

– The remaining public services are our true heroes. Any shelling – they immediately leave. I will have a request, there is an element of justice, in those areas that are now practically at the forefront, including Donetsk, to introduce wage rates for them directly, – suggested the official.

– Regarding these shelling: as I understand it, the attacks fall directly on the residential areas of Donetsk, right? Putin said.

“I draw your attention to the fact that no foreign media, human rights organizations, as they say, vote on this issue,” the president concluded.

The head of state spoke about the possibility of transferring the most serious patients from Donetsk to federal hospitals. The Ministry of Health is ready to take care of transportation if necessary.

Putin said that Novorossia’s doctors should be sent for training. After all, as you know, a doctor who stops learning stops being a doctor.

“They must be included in the additional training system of the Russian Ministry of Health,” the Russian leader instructed.