HomeLatest NewsPutin's informal conversation with the heads of the CIS countries: the main...
Latest News

Putin’s informal conversation with the heads of the CIS countries: the main thing 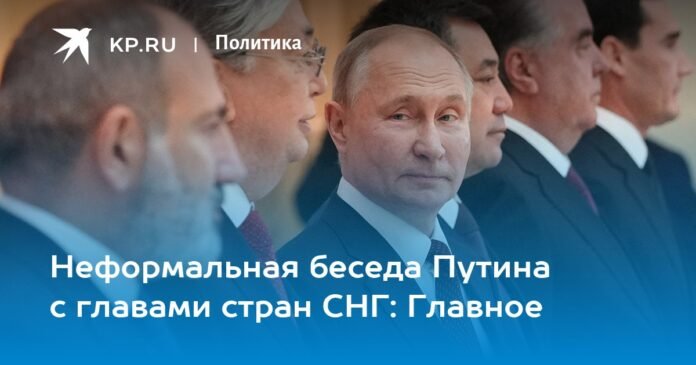 Putin said that the deepening of interaction between the CIS countries is in his interest.

As expected, not everyone made it to the informal meeting of the heads of the CIS. Ukraine and Moldova are still officially members of the Commonwealth, but, for obvious reasons, they do not participate in political events.

Armenian Prime Minister Nikol Pashinyan arrived first. Either he really wanted to talk to Vladimir Vladimirovich alone, or something else, but the politician completely forgot about traditional protocol photography. Shaking hands against the backdrop of flags, Pashinyan tried to leave with Putin. But our president delayed him and reminded him of the photo. Even at informal events, one should not forget about diplomatic protocol!

And Alexander Lukashenko was the last to arrive at the group photo of the nine politicians. Pashinyan and Aliyev patiently stood next to each other. Although there are tense relations between Armenia and Azerbaijan, both countries remain members of the Commonwealth.

“The fact that we have once again met in such a friendly circle, in my opinion, is eloquent testimony to our desire to further build joint cooperation in the CIS space in the spirit of a genuine strategic partnership, mutual benefit and consideration of the interests of all. countries,” Putin said at the beginning of the open parts.

The Russian leader acknowledged that “differences arise between the participating states.” This year, they filmed not only in Karabakh, but also on the border of Kyrgyzstan and Tajikistan. However, this does not prevent economic integration.

– The interaction in 2022 was successful. By the end of the year, the commercial turnover will reach 100 billion dollars, the president noted.

Other achievements of the CIS according to the Russian leader:

* Commonwealth countries exchange national currencies in trade with each other.

* Only one space is retained.

Putin reminded that 2023 will be the year of the Russian language in the CIS.

– However, the main thing is that we are ready and we will cooperate, and even if a problem arises, we strive to solve it ourselves, together, jointly providing comradeship assistance and mediation assistance, – the head of the country summed up.

In the end, Vladimir Vladimirovich congratulated both the politicians and the peoples of the Commonwealth on the upcoming New Year.

This year Kazakhstan chaired the CIS, followed by Kyrgyzstan.