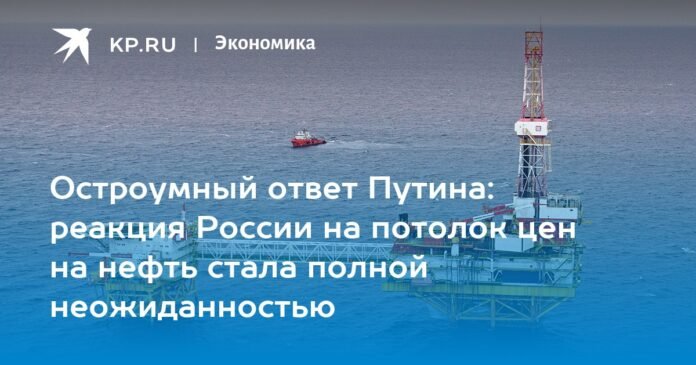 … And no one expected the Russian response to be soft. The Russian authorities promised to leave “the roof brotherhood” without our oil, and they kept their word. But they did it gracefully.

Let us remember that December 5 marked a turning point in the history of the world hydrocarbons market. From that day on, Europe introduced a ban on buying Russian oil shipped by sea, and also won the so-called maximum price.

The G7 countries (USA, UK, Germany, Italy, Canada, France, Japan), Australia and the EU signed an agreement on the upper limit of the price of Russian oil. Consequently, as of December 5, companies in these countries are prohibited from:

– Transportation of Russian oil, which is sold at a price above the limit.

– Carry out maintenance on tankers and ensure the transportation of Russian oil if it is sold over the limit (including to third countries).

But that’s not all: in February the European embargo on Russian oil products – fuel oil, gasoline, etc. comes into force. The goal of all these restrictions is to reduce the revenue of the Russian budget in order to make it more difficult for our country. to finance a special military operation. For information: last year Russia earned $493.3 billion from exports, of which $110 billion came from oil.

DON’T LIMIT, LET YOURSELF BE LIMITED

Both the president and the ministers of the Russian government immediately declared that our country would not supply oil to the countries that had adhered to the limit. It only remains to document everything. And then it happened: on the night of December 27, Vladimir Putin signed a decree on retaliatory measures to introduce a ceiling on Russian oil prices. This is what that response would look like:

– Russia stops deliveries of oil and petroleum products if a “maximum price” is specified in the contracts.

– Exceptions are possible, but only by decision of the President.

The text of the decree seems very ingenious.

On the one hand, we do not deny the supply of oil to anyone. If you want, buy, but without these limits of yours. What India is doing with China now – according to the American agency Bloomberg, they buy Russian oil even cheaper than $ 60, they just do not offend us with ceilings.

On the other hand, Western countries have pledged to comply with the limit. According to the documents, it turns out that it is not Russia that refuses to sell oil, but Europe is shooting itself in the foot.

Why Europe and not America? Because the United States has its own oil, at least fill it up. But the Old World was put in a very difficult situation.

– In Europe, oil refineries are oriented towards Russian oil, – explains Maxim Chirkov, associate professor at the Faculty of Economics of Moscow State University.

So without Russian oil, already expensive energy resources in Europe will skyrocket even further. This could be a serious blow to the economy of the Old World.

However, Western countries can still change their policies. In mid-January, the leaders of the “Ceiling Fraternity” will meet for a meeting where they can review the price ceiling. It can be lowered or raised. And then, you see, and cancel. Now of course this is awesome. But everything is changing too fast in our lives.