HomeLatest NewsRapid rejuvenation and "repair" of the tendons: what discoveries, which seemed like...
Latest News

Rapid rejuvenation and “repair” of the tendons: what discoveries, which seemed like a miracle, were made in Russia 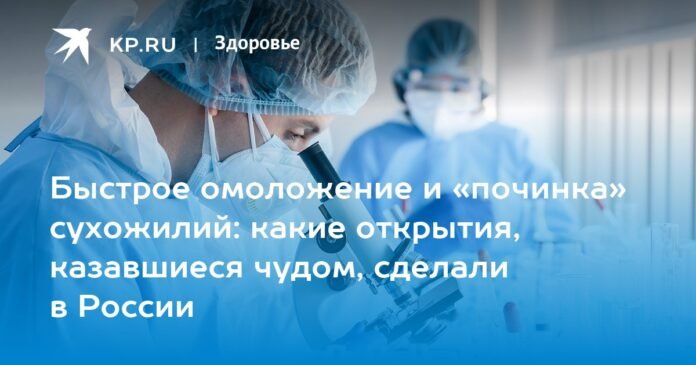 The developments that will be discussed were carried out with the support of the Ministry of Education and Science and federal subsidies.

The trend of 2022 is import substitution, and our scientists have succeeded in many things. Often they did not even replace, that is, they did not find a replacement for what is in the West, but surpassed their foreign colleagues. The developments that will be discussed were carried out with the support of the Ministry of Education and Science and federal subsidies.

Hundreds of millions of people around the world suffer from acute pain. The demand for analgesics is enormous, and the drugs that are currently prescribed – the same opioids – cause irreversible consequences. One of the problems is that they get used to it and the person becomes dependent on the pill or injection. Our scientists have developed the molecular basis for future pain relievers that are effective, non-addictive and safe for patients. This is not yet a ready-to-use drug, tests are needed. But a very important step has been taken towards its creation.

Rock against tumors and Parkinson’s

Brain cancer is difficult to treat because of the blood-brain barrier (BBB) ​​between the circulatory and central nervous systems – nature invented it to protect the brain, but the barrier also reluctantly passes over to drugs . Saratov scientists have figured out how to “break” this barrier – chop rocks! Yes, stronger. A two-hour concert at 100 decibels (the maximum volume level of an MP-3 player) increased the permeability of the BBB to drugs in experimental rats by 30 to 40 minutes. After such therapy, the survival rate increased even with glioblastoma, the most insidious tumor. Saratov residents plan to try music therapy to combat Parkinson’s and Alzheimer’s diseases.

At another Saratov University, the Technical University (SSTU), they patented an artificial heart valve with parts made of especially durable ceramic – zirconium dioxide. The wear resistance of this material is one and a half times higher than that of those currently used. It takes root well, improves the quality of cardiac circulation, reduces the risk of thrombosis and hemolysis (red blood cell destruction is a common side effect after valve implantation). Mass production of tubes is promised in a few years, but they promise that it will be better and much cheaper than foreign analogues.

How to replace the bone

We are close to a breakthrough in the fight against postoperative infections – this is how chemists from Nizhny Novgorod (UNN) assess their work. They modified the material for the implants, obtaining a crystalline chemical analogue of bone, and added antibacterial components. “The usual filling of the implant with antibiotics is fraught with its spread throughout the body. The use of fluorapatite-based bioceramics not only reduces the risk of infection after implantation, but also protects healthy cells in the body,” the university explained.

One new tooth is better than two old ones.

Synthes Pro dental implants made of nanotitanium with a biocompatible coating, which take root twice as fast as imported prostheses and do not cause pain or inflammation, are a novelty from scientists at Ufa Aviation Technical University (USATU) and dentists from Chelyabinsk. The first pilot batch has already passed all the testing stages and now the prostheses are being tested on volunteers.

“Repair” of the skin, cartilage, tendons

In cell therapy, living fibroblast cells are actively used, which produce collagen protein – the basis of skin tissues, tendons, bones and cartilage. They are taken from the patient, propagated in the laboratory, and then introduced into damaged tissue. But there’s a problem: Fibroblasts divide slowly, especially in elderly patients, and many die during transplantation, causing severe inflammation. Biophysicists from various Moscow institutes figured out how to make fibroblasts more viable and resistant. The technology is complex, but to make it clearer to us, the scientists came up with an image: “backpacks” with a multifunctional protein peroxiredoxin that sticks to cells. It is he who invigorates them, and “repair” with collagen occurs faster and without complications.

And scientists from the University of Penza (PSU) received a patent for a new method of treating complex injuries of the Achilles tendon – cuts, tears, sprains, even old ones. They “stick” them with xenopericardial plaques, which are enzymatically processed pieces of the pericardium (heart bag) of a calf. The material is durable, it takes root well, the treatment proceeds without complications (than traditional methods sin), and the tendon is fully restored and even becomes stronger.

Today, the most popular way to remove wrinkles is carbon dioxide laser burning. The effect is not bad, but the wounds heal for a long time. An alternative option from a team at the Institute of Applied Physics (IPF) is a fiber laser, which makes the procedure less painful and recovery faster. The method is called non-ablative fractional photorejuvenation. Microholes are formed in the skin, damaged cells begin to divide, and the rejuvenation process begins in the deep layers of the dermis.

Employees of the Russian Research Institute of Medicinal and Aromatic Plants developed and patented a herbal medicine (comprising roots and rhizomes of elecampane, motherwort, lingonberry leaves, and rose hips) for type 2 diabetes. The name of the medicine It has not yet been announced, but scientists claim that it effectively lowers blood glucose levels, is suitable for long-term use, does not cause addiction or adverse reactions.

Another direction of the work of scientists is to help people do without drugs for as long as possible, until old age. High-quality prevention and early, very early diagnosis, which would be more correctly called disease prediction, will help here.

Belgorod scientists have found a gene that affects the development of gastric ulcer (hypersecretion of hydrochloric acid) and proprietary methods for predicting the risk of this disease. According to statistics, about 40% of all cases of disability in patients with a gastroenterological profile occur precisely because of an ulcer, now doctors will be able to prevent the disease with preventive methods.

A patent has also been obtained for the genetic prediction of preeclampsia, a serious complication during pregnancy that is dangerous for both mother and baby. Predisposition can be determined by a blood test before pregnancy and action can be taken.

And researchers from the Institute of Physiology of the Russian Academy of Sciences discovered the predisposition of adults to nicotine addiction. It all extends to the intrauterine period of development around week 5-8, when “brain reward systems” are formed. If the fetus experiences hypoxia (oxygen starvation) during this period, for example, due to mother’s stress, then after many years this may again haunt the uncontrollable desire to smoke cigarettes.