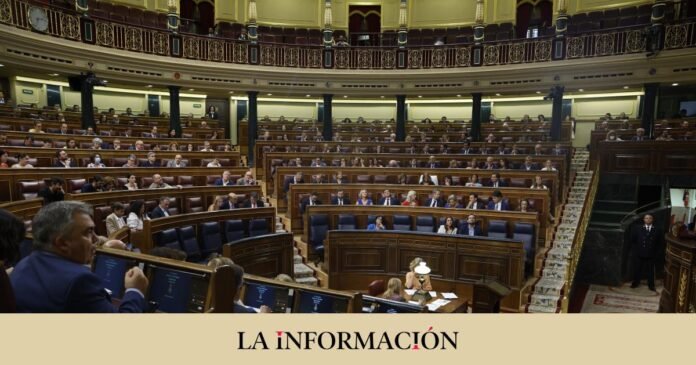 We live in Spain in troubled and dangerous times in politics. Never in the years of our democracy, protected by the exemplary Constitution of 1978, had political resolutions so suspected of undermining the rule of law come together, thanks to some decisions made by the Government itself, whose understanding seems extremely asdifficult. We are crushed by a climate political tension and aggressiveness, in which forms, tolerance and education have been lost, entering a spiral of unusual and disturbing tension. In the midst of this rarefied and alarming atmosphere, it is worth asking, with some uneasiness, if our democracy maintains that solvency and firmness that we have boasted about.

From this rostrum, what my thoughts ask of me, one day, is to open a window of light to carry out a deep reflection, as required by the moment and its circumstances, and try to proceed to a reasonable, sensible and impartial debate, in defense of a rule of law, which must be safe from related maneuvers that pervert it.

Therefore, it is urgent to recover among all that spirit of harmony, tolerance and respect that led to the establishment of democracy and freedom in Spain, through a model transition that was an example admired throughout the political world.

Democracy, it is said and with, is the least bad political system of the existing ones, because the other options are frightening, but it suffers, due to its very democratic nature and respect for citizens, of that reason illegal and brute force that always accompanies to dictatorships, to impose their controls and put an end to freedoms. Hence, most of the theorists of the Rule of Law agree on the need to constantly keep alive and vigorous the democratic principles that sustain it. Just as soldiers are supposed to be brave, it is understood that those who democratically rise up as supporters of the system will defend its stability from their positions of privilege and command. But it’s not always like this. There are also advantagers, in democratic clothing, who, taking advantage of the goodness of the system, try to find cracks to weaken it. It has already been proven that a democracy can be eroded and even terminated from within.

In the book ‘How democracies die’, by academics Steven Levitsky and Daniel Ziblatt, both from Harvard University, these perverse processes are explained very well. Although citizen life in general seems to go on normally and that people are oblivious to what is being hatched, this does not mean at all that democracy is safe. Whereas before, the authors maintain, democracies fell due to violent coups, today democracies die at the hands of elected leaders who use their power to subvert the democratic mechanisms through which they were elected.

“Democracy -they write- no longer ends with a military coup or a revolution, but with a slight whimper: the slow and progressive weakening of essential institutions such as the legal system or the press and the global erosion of traditional political norms ( …) Many government measures that subvert democracy are ‘legal’ in the sense that they are approved by either the legislature or the courts. It is possible that they are even sold to the population as measures to improve democracy (…) Those who denounce the abuses of the Government can be dismissed as exaggerated or alarmist.”

In view of the direction taken by the Government with a way of doing politics that for many is incomprehensible, it is worth asking ourselves where we are going and what is the objective of this drift, which has plunged Spain into a very worrying capsize. Right now we are facing specific events that arise from the hard core of democracy. On the one hand, some surprising reforms to the Penal Code, desired and for the benefit of specific people for crimes as serious as sedition and embezzlement. And on the other, the failed attempt to modify the system for electing members of the Constitutional Court.

Since the separation of powers established by Montesquieu, the proper functioning between the executive, the legislature and the judiciary is subject to the unquestionable and sacred respect for this balance and its independence. Breaking this premise through controversial reforms, in order to control the Constitutional Court by force, and satisfy one of its main allies, ERC, which abhors the Magna Carta and which zealously seeks to fracture the unity of Spain, supposes a rupture of the aforementioned balance and the adoption of à la carte rules of the game, incompatible with the equity required in a State of Law.

Many respected and honorable socialist voices have already been raised against the decisions that Pedro Sánchez is making. Those politicians, who fought for liberties, side by side with other parties despite their discrepancies and ideological differences, considering that the path taken by the president is irresponsible and reckless, far from that desire for tolerance and understanding that allows the democracy.

It is true that both the PSOE and the PP have responsibilities in the non-renewal of the judicial and Constitutional bodies, but this does not justify changing the rules of the game, after the failure of some meetings held with great misgivings, through the presentation of cover of a few amendments mixed in a jumble of resolutions. A change in the election of the members of the Court of Guarantees, contemplated in the Constitution itself, cannot be solved in this oblique way, but with legal supports of entity and proportional to the foreseen change.

In it, it is worth mentioning the course taken in favor of the Catalan separatists who seem to have become the true masters and lords of Spanish politics, who they hate so much, but who have never been granted so many and unimaginable profits. Can an entire country be put in check, divided to these extremes, by decisions that seem to seek only to remain in power?

To conform to the wishes of the nationalists is to get into a blind alley. The separatists have spent many years conveniently embracing their visionary aspiration. In that totum revolutum of feelings and history – let’s see who doesn’t have it in this country – they don’t hesitate to appropriate the first and manipulate the second. They are not stopped by the certainty of lacking an overwhelming social majority in favor of their claims, nor by the lack of respect for those who think otherwise in their own territory, whom they despise and humiliate. They will never stop and if they find a favorable wind, like now, they will spread their sails to make the most of it and go as far as possible. It is not surprising that the same afternoon that the controversial changes in the crime of sedition and embezzlement were being debated in congress, Oriol Junqueras, the all-powerful leader of ERC, was also demanding a referendum on self-determination. Anything else?

It is difficult to understand without unease what has been happening for a few years in Spanish politics. The foundations of coexistence and solidarity of a strong and admirable nation of which we should be proud are being put at risk. This country urgently needs to recover its totally democratic course, that spirit of concord and tolerance so longed for – I will never tire of repeating it – and trust in the strength of the institutions established by the Constitution, to contain maneuvers that put social harmony in the way. Beware of waking up one day and realizing that our democracy is pure mirage.