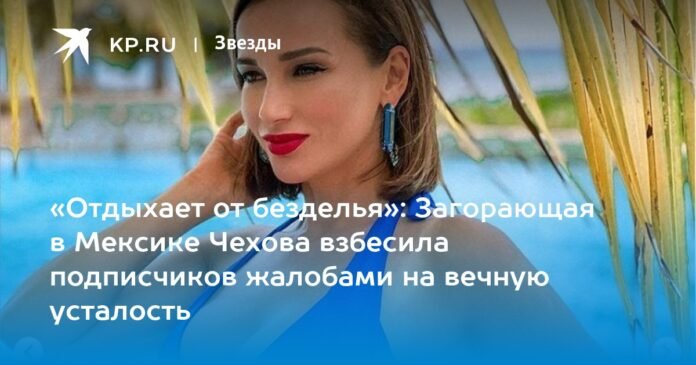 Anfisa Chekhov is almost never at home. The TV presenter travels the world non-stop. In 2022, he flew to the Seychelles in January, where he lived for two weeks in a luxurious five-star hotel. Then Anfisa lived for almost six months on the Indonesian island of Bali. In the fall, Chekhova toured the United States for a month. She ended up last year in the Bahamas, where she celebrated his 45th birthday. The screen star warned that she would be on tour throughout January.

And indeed, Anfisa celebrated the New Year already in the USA, under the palm trees of Miami.

“I love celebrating New Years in the heat!” she told subscribers on social media.

At the end of December, Anfisa celebrated her 45th birthday in the Bahamas. Photo: social networks.

The TV presenter announced that she met the holiday, first according to Russian time, and then according to local time. On January 1, Chekhova posted a video taken by the hotel pool: blue water, bright sun, the chef grilling, and Anfisa enjoying a cocktail. Chekhova said that she took two large suitcases full of things to have something to photograph for her blog.

A couple of days after the New Year, the star vacationer got in touch from Mexico. Anfisa showed subscribers how she dances in a short sundress on the seashore. In a post below the video, Chekhova noted that there would not be a detailed story about her trip to Mexico. The TV presenter said that she was very tired and that more than anything she wants to take a break from the phone.

“I’m in Mexico. But in my plans to take a break from the phone! Don’t shoot or post anything. To be honest, I was terribly tired of this process, Chekhova complained. – I don’t even remember the last time I enjoyed this world without holding a phone, not filming, editing or uploading anything. I want to remember what it’s like to live your life just for you. Do you think I can completely forget about the phone while in Mexico?

Chekhova’s publication caused outrage among his subscribers. They were outraged, they say, why is Anfisa so tired, from endless rest? After all, the TV presenter only does what is filmed on the beaches and in restaurants, showing how she spends her time carefree.

“You can stay longer and not disturb people. It is somehow inappropriate to fly to America now”, “Why not in Magadan or Vorkuta?”, “Relax from idleness”, “No, it won’t work, you are addicted to this”, “Anfisa, start relaxing already. Only today, for the third time, I read how you want to take a break from the phone and film. And they’re still working,” “Well don’t shoot, that’s a loss,” followers wrote in the comments below Chekhova’s post.

Many are sure that Anfisa hardly sees her son because of her endless travels.

“The son does not see his mother at all. Because the mother has worked so much that she rests without ceasing. What are you tired of?” Netizens are outraged.

Eight-year-old Solomon celebrated the New Year without his mother. Apparently, the boy spends the holidays with the family of his father, the actor Guram Bablishvili. And in the fall, due to a trip to the United States, Chekhova missed September 1 and did not see how her son went to school.

Share
Facebook
Twitter
Pinterest
WhatsApp
Previous article
Sergey Plugotarenko: In no case should you discriminate in any way against IT specialists who left KXan 36 Daily News
Next article
Arsenal’s game is far from champion. The Premier League leaders lost points in the first match of 2023