Restoration of the “Prince Igor” memorial, the mound was cleared four times 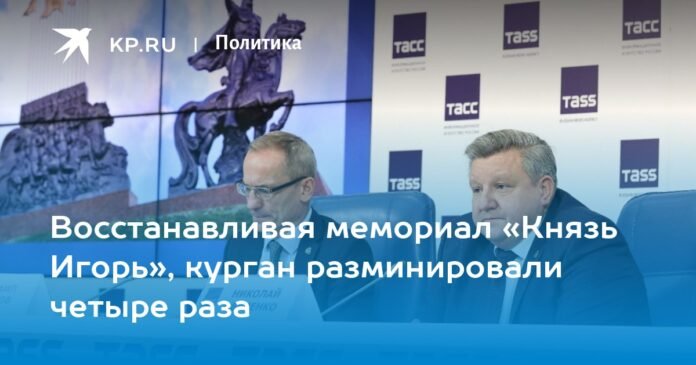 Systematic work is underway to restore destroyed monuments and obelisks in the Donbass. Photo: RVIO

After the start of the SVO last year in the Donbass, the Russian Military Historical Society was able to restore three iconic monuments in a short time. This is the complex known throughout the country “Saur-Mogila” – a legendary mound and a strategic height in the Donetsk People’s Republic. This is the “Undefeated” monument, dedicated to the feat of the heroes of the Young Guard. As well as the “Prince Igor” memorial in the Lugansk People’s Republic.

– The results are impressive. I am talking, first of all, about the role in the rapid restoration of the “Saur-mogyla”. On behalf of the President of Russia, the RVIO carried out this work in record time, – said Denis Pushilin, acting head of the Donetsk People’s Republic.

Now there is a plan to build the second stage of the Saur-Mogila memorial, the pantheon of military glory, and to rebuild the monument on the site of the 4/13 bis mine shaft, where the Nazis executed and buried fighters. against Nazism during the Great Patriotic War.

The head of LPR, Leonid Pasechnik, also highly appreciated the speed and quality of the work of RVIO specialists:

– In four months, a lot has been done at the “Undefeated” memorial: the base of the monument has been stabilized and cracks have been removed, the Alley of memorial plaques has been landscaped with photographs of the Young Guards. This memorial is a symbolic place for all the inhabitants of the republic. During the Great Patriotic War, the feat of the “Young Guards” inspired the entire Soviet people to fight and win.

Today, according to the leader of the Lugansk region, his compatriots are also defending their right to life in peace and freedom, just like the heroes of the Young Guard 80 years ago.

– The restoration of the “Prince Igor” memorial near the village of Luganskaya, where the militants of the Armed Forces of Ukraine were detained 8 years ago, deserves respect for the specialists who worked there. In fact, they worked in combat conditions. This mound was cleared four times near the Seversky Donets. And each time they found more and more ammunition. Our restorers did not have any problems, but in the immediate vicinity there were six explosions in the “petals”, said Nikolai Ovsienko, deputy head of the RVIO.

At a press conference held in the TASS agency, he also said that about a thousand monuments and obelisks were destroyed in Donbas during shelling from the Ukrainian side – such was the state policy of the current Kyiv regime. The RVIO is carrying out systematic work to restore them on behalf of the President of Russia.