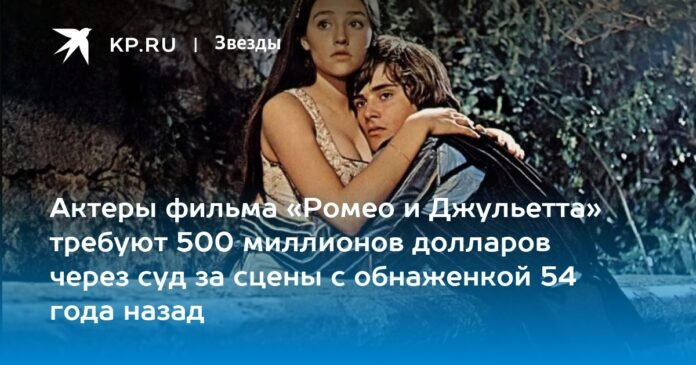 Franco Zeffirelli’s painting “Romeo and Juliet” in 1968 made a splash in its time: it became a hit, received two Oscars, three Golden Globes, one BAFTA award, etc. Teenagers Leonard Whiting and Olivia Hussey, who played the lead roles, became instant superstars. And he lived in the glory of this image until now. Until they found out that for any reason you can now go to court and demand compensation for “injuries”.

Leonard and Olivia consulted and decided: since they were filmed without clothes at a young age (he was 16, she was 15), it was time to ask for money for it. 54 years later, when she was 71 and he was 72. Director Zefirelli died in 2019, so the actors, for whom Romeo and Juliet became an unconditional magnum opus, filed a lawsuit against Paramount, the copyright holder. of the movie.

The moral damage for filming British actors without clothes is estimated at “more than 500 million dollars”. The shrewd maneuver became possible after the temporary removal of the statute of limitations for sexual assault cases, introduced in the state of California. Filming in “Romeo and Juliet” artists considered sexual abuse.

“What they were told and what happened are two different things,” insists casting director Tony Marinozzi. They trusted Franco. At the age of 16 they trusted Franco as actors. Franco was his friend and, honestly, what was left for them to do at 16? There were no options. #MeToo was gone.

The point is that Zeffirelli assured the young actors that the candid scenes filmed would not be included in the final cut. But in the end, in Romeo and Juliet, Whiting’s buttocks and Hussie’s chest were shown. As they realized half a century later, that was precisely what prevented them from having a dizzying career, because “due to the illegal demonstration of their naked bodies, they experienced psychological and emotional suffering.”

Although five years ago, in an interview, Olivia Hussey assured that the nude of Romeo and Juliet “was necessary for the film” and “it was not a big deal”. “And Leonard wasn’t shy at all! In the middle of filming I completely forgot that he had no clothes on, ”said the actress.