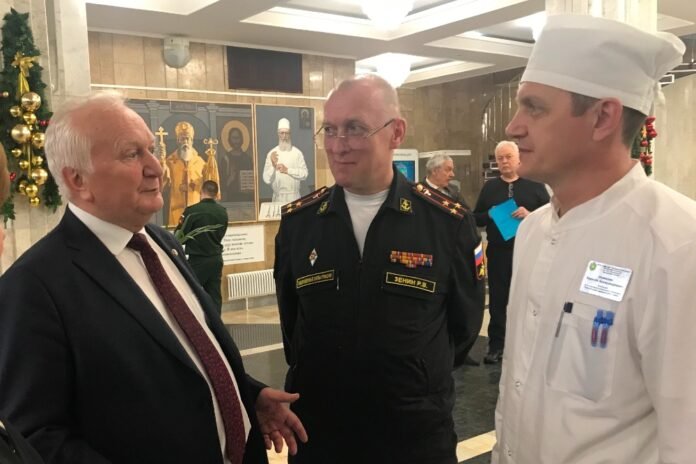 Schools and kindergartens in Energodar, where the families of the employees of the Zaporozhye nuclear power plant live, have received and continue to receive these days blankets, bedding, books, toys, sports equipment and food packages for the table New year. All this was collected and purchased at the expense of the participants of the industry charity marathon “Rosatom” together with Energodar”. It started on December 12, 2022 and lasted a week.

And on Friday, December 23, in Krasnogorsk, near Moscow, at the Central Military Clinical Hospital named after AA Vishnevsky from the Ministry of Defense of the Russian Federation – they accepted a gift from Rosatom and its main nuclear weapons center RFNC- VNIIEF (Sarov, Nizhny Novgorod region), a unique medical development. And not one, but ten innovative “Tianox” respiratory devices for the generation of nitric monoxide for therapeutic purposes.

The peculiarity and uniqueness of the device is that the synthesis of inhaled NO (the chemical formula of nitrogen monoxide) takes place directly during the therapy, in a gas discharge at room temperature. In addition, for this the air of the room where the device is installed is used: an intensive care unit, an intensive care unit or a rehabilitation ward in a district clinic.

“Our device generates therapeutic nitrogen monoxide right at the bedside,” emphasizes Viktor Selemir, Chief Director of the RFNC-VNIIEF Research and Production Center, Corresponding Member of the Russian Academy of Sciences, who led the innovative development. – This allows you to significantly expand the availability of NO therapy. In addition, the purity of the product, which acts directly on the patient, is guaranteed – this indicator is checked at the time of gas production.

It has long been known that nitric oxide has pronounced anti-inflammatory properties and positively affects almost all processes in the human body. But, how to achieve this mixture of gases with high therapeutic properties?

Previously, the practice was as follows: a central chemical factory was created, which produced nitrogen monoxide. At the same place, it was poured under pressure into cylinders and transported in this form to medical institutions. Such centralization, according to practitioners, is not always convenient. There is another unpleasant circumstance – nitrogen monoxide as a chemical compound is very unstable, quickly decomposes and oxidizes at the NO2 level. And inhalations with impurities of such a gas do not benefit the human body, but harm …

Academician of the Russian Academy of Sciences Alexander Chuchalin, a well-known pulmonologist in Russia, went to great lengths to get an apparatus that would prepare this mixture right at the patient’s bedside. And at some point he very successfully “hit” the atomic scientists in Sarov. And there, since the days of the Soviet Atomic Project, one of the best Russian schools of gas discharge physics. Professor Vladimir Karelin and his colleagues Alexander Shirshin and Sergey Buranov accepted the challenge. The physics of the main discharge chamber was investigated and the design of the device was proposed, which was patented as “Nitric Oxide Electrochemical Generator”.

On this basis, “Tianox” was created – already as a medical device. The development is protected by five patents in Russia and patents have been obtained in foreign markets. Before others, they received it and began to use it at the VA Almazov in St. Petersburg, in the Moscow center named after AN Bakulev, at the Perinatal Center named after VI Kulakov, at the Nizhny Specialized Cardiosurgical Hospital Novgorod, at the Tomsk Research Institute of Cardiology, as well as at the hospital named after NN Burdenko.

As it was said at a meeting with the medical staff of the Central Clinical Hospital named after AA Vishnevsky in Krasnogorsk, the free transfer of a batch of ten such devices covers the estimated needs of the intensive care unit and emergency units. intensive care, where participants in the Special Military Operation and victims of hostilities are treated.

The head of the 16 pulmonology department, Lieutenant Colonel of the medical service Alexei Shumilin, confirmed that he and his colleagues had already become familiar with the Tianox device and appreciated its high efficiency, including in the treatment of a new coronavirus infection and post- covid. syndrome.

– It is also in great demand in the preparation of surgical operations, be it cardiology or some kind of pulmonary, respiratory pathology resulting from a concomitant wound, contusion or injury, – argued his colleague, Deputy Director of the Research Hospital, Doctor of Medical Sciences, Professor Alexander Alekhnovich.

Please note that the full and exact name of the medical institution where Alekhnovich, Shumilin and hundreds of their colleagues work and serve today sounds and is written like this: Federal State Budgetary Institution “National Medical Research Center for High Medical Technologies – Clinical Hospital Central Military named after AA Vishnevsky”. And medical science here is not alone, it does not rise in academic separation, but lives and develops in direct interaction with medical practice. Here they keep an eye on everything new that appears in the national medical instrumentation market.

According to Alekhnovich, the Tianox nitrogen monoxide generating apparatus is far from the only medical development that was born in Rosatom and was tested at the Vishnevsky hospital along with other well-known medical centers. But, perhaps, the first so in demand and proving its effectiveness in practice.

Anatoly Myalitsin, head of the Special Medical Equipment department in one of the Rosatom divisions, only smiles gratefully in response to such assessments:

– In 2022, we deliver two hundred devices to medical institutions in Russia, organize their warranty and post-warranty service. And they are capable of producing, if such an order is formed, up to 2,500 sets annually. Already this year, Tianox is included in the equipment standard of Russian neonatal centers. According to estimates, the widespread use of such devices will reduce the number of deaths by 100-150 thousand per year and may lead to an increase in the average life expectancy in Russia by 2-2.5 years.