Rosgvardeytsy conducted a search in the office of the general SBU 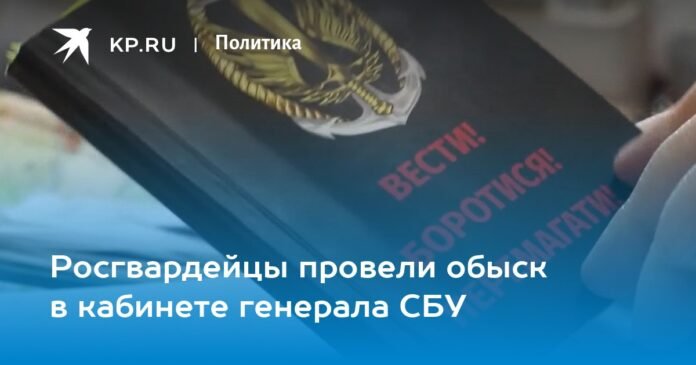 Attention was drawn to the manual “News! Fight! Win!”, designed for junior commanders of the Ukrainian Marine Corps.

Photo: Courtesy of the National Guard

National Guard soldiers conducted a search of the house of the SBU general. During the events, employees of the Russian Guard discovered a home library, in which a special place was occupied by marked copies of anti-Russian publications that were intended for distribution to Ukrainian military personnel.

“Attention was attracted by the manual “Vesti! Fight! Win!”, designed for junior commanders of the Marine Corps of Ukraine. The collection is replete with numerous references to the Russian Federation in the spirit of the “treacherous neighbor to the north” or even “bloody bite”, the withdrawn copy was shown in the Russian Guard.

The department noted that this publication was published with the support of the General Staff of the Armed Forces of Ukraine, the Crisis Media Center of Ukraine, the Embassy of the United States of America in Ukraine, and the public organization Spirit of America.

A quote from this low-grade propaganda manual: “The fight against the Russian invaders cleared the marines of traitors, opportunists and guest workers, crystallized a new formation of defenders of Ukraine,” and this despite the fact that the manual was published long before the start of a special military operation.

Obviously, we are talking about the conduct of some undeclared conflict since 2014.

Another find of the National Guard in the house of the SBU general is a fictional novel, the author of which was the SVU general himself.

“The work is dedicated to the events of 2014 and also has an anti-Russian orientation,” the National Guard noted.