HomeLatest NewsRussia launched a storm from the seas. What are Zircon hypersonic...
Latest News

Russia launched a storm from the seas. What are Zircon hypersonic missiles capable of? 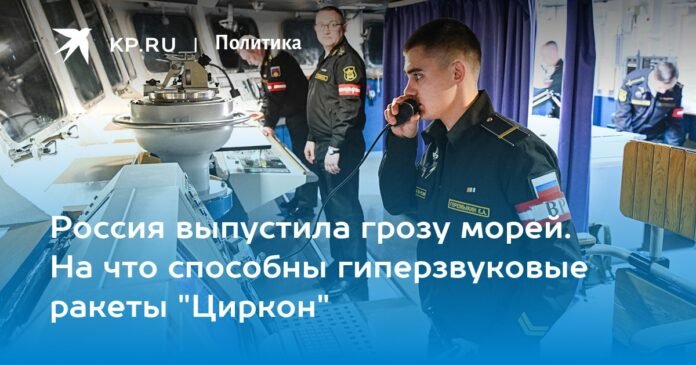 Russian President Vladimir Putin participated in the commissioning ceremony of the Admiral Gorshkov frigate via videoconference. This ship is equipped with the latest Zircon hypersonic missile systems – the participation of the head of state in the farewell to the campaign was due precisely to this circumstance.

“Today we have an important, if not significant event: the Admiral Gorshkov frigate is starting a long-range sea voyage,” Vladimir Putin said. – This is a common thing, but this time the ship is equipped with the latest Zircon hypersonic missile system, as well as other state-of-the-art weapons.

The last rocket has every chance to become the mistress of the sea. It is capable of hitting targets on land and at sea at a distance of about 1000 kilometers. It was this distance that the rocket covered during tests this spring: the same Admiral Gorshkov frigate fired a salvo from the Baltic Sea and hit a target in the White Sea.

The Zircon flies at hypersonic speed, it cannot be intercepted by any existing or future missile defense system. Do you remember how in March of this year the Kinzhal airborne hypersonic missile pierced the concrete of underground ammunition depots? These warehouses were supposed to withstand an atomic bomb blast! So, “Zircon”, roughly speaking, is a marine version of such a lethal weapon. Don’t swim, it will kill you! Even the most powerful aircraft carriers should not come closer than 1000 kilometers to Admiral Gorshkov.

“I would like to thank the specialists of the military-industrial complex who developed and began to mass-produce this unique weapon,” Vladimir Putin continued. – It has no analogues in any country in the world. I am sure that such powerful weapons will make it possible to reliably protect Russia from possible external threats and will help to ensure the national interests of our country. I would like to emphasize that we will continue to develop the combat potential of the Armed Forces and produce advanced models of weapons and equipment that will protect Russia’s security for decades to come.

“A feature of Zircon hypersonic missiles is the ability to reliably outperform any modern advanced air defense and anti-missile defense systems,” the head of the military department emphasized. – The flight speed of the missile is greater than Mach 9, and the range is more than a thousand kilometers. The main efforts during the campaign will focus on countering threats from Russia and maintaining regional peace and stability together with friendly countries, the defense department chief said. During the exercises, trainings, the crew’s actions on the use of hypersonic weapons and long-range cruise missiles in various environmental conditions will be practiced.