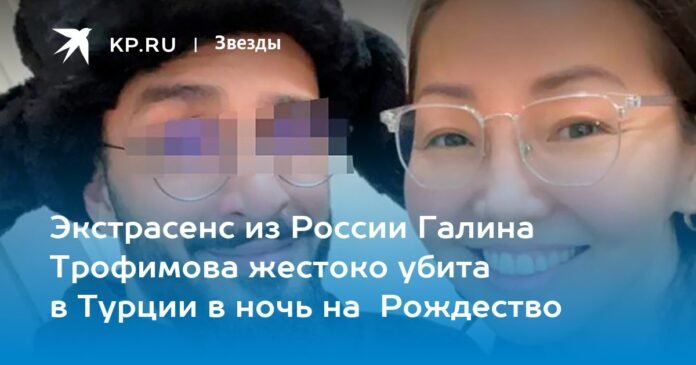 Russian psychic Galina Trofimova was found dead in Turkey on Christmas night. The shaman moved to Istanbul with two children in search of personal happiness. In a foreign land, he tried to establish a relationship with a chosen one named Khabib. And now the woman’s relatives suspect a handsome lover of her death.

Relatives of psychic Galina Trofimova are sure that it was Khabib who was involved in the death of the psychic. Now the man is on the run, he presumably he went to Iran.

“Our sister died at the hands of a man with black thoughts. Her life was cut short by a man she loved and considered her husband. The killer took the phone from him, stole all the money and fled to Iran, ”Trofimova said. the sister announced.

Relatives are sending the body of the psychic to Russia. They organized a fundraiser.

Galina was considered a successful psychic, she lived in Moscow, and then moved to Turkey with her daughter and son. The girl attended marathons and training courses, she was known for her psychic abilities and was initiated into shamans. She blessed, she led meditations, she transmitted the messages of the great shamans, she taught the knowledge of “Bazza”.

In Turkish language courses, he met an Iranian named Khabib. The lonely beauty was crazy about him.

“After a difficult marriage, I licked my wounds for a long time. I aggressively answered all questions about my personal life, they said, I don’t need anyone. I especially intimidated everyone who wanted to meet me. You can look at my map and decide if I am interesting for you “Born and raised in a country of the strictest Islam to support me on my difficult path,” said a woman known as psychic Uu Dalaya, shortly before her death.