HomeLatest NewsSánchez anticipates that the Spanish economy will grow more than 5% in...
Latest News 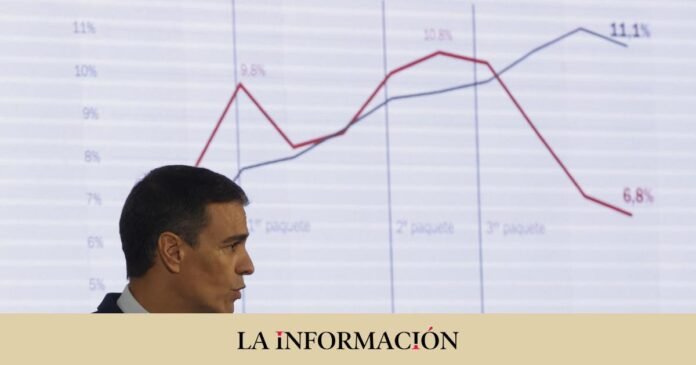 The Prime Minister, Pedro Sánchez, stated this Tuesday that it is “very likely” that the Spanish economy will close the year with year-on-year growth of more than 5% of GDP, which is a figure higher than expected. In addition, Sánchez stressed that this figure also exceeds that achieved by neighboring countries and the euro area average, as well as that of other advanced economies. The Chief Executive stressed that this achievement is due to the management of his government team committed to fiscal consolidation and compliance with the commitments to reduce the public deficit and debt, acquired with the European Union.

Sánchez has also shown himself in his forecasts for 2023, a year in which, he has assured, everything indicates that the Spanish economy will grow positively above the average for neighboring countries. In this sense, he has made reference to the indications that show that Spain will dodge the crisis and end the year with a positive balance, even if it is slight. However, he has also stressed that it is necessary to be prudent in the face of “such an adverse” scenario after two years in which a pandemic and a war on the continent have had to be faced.

After the meeting of the Council of Ministers on Tuesday, the President of the Government has also guaranteed that the Government “will be up to the task”, taking measures to “protect the people” and waging battles in Europe, where he has stressed that Spain and Portugal managed to push through the gas price cap, known as the Iberian exception. A measure that has saved more than 4,000 million euros for Spanish citizens, which translates into an average annual saving of 150 euros in each home. Sánchez highlighted that on December 25 the price of electricity was 54% lower than that of Germany and 63% that of Italy; however, he has not mentioned that this was the lowest price recorded in a year and a half.

The Executive leader has also reviewed the calculation of measures carried out by the members of the coalition this year and since the beginning of the legislature. Among which he has highlighted the packages to deal with the crisis generated by the Russian invasion of Ukraine, to which the Government has already allocated a total of 45,000 million, given the increase in the cost of living, energy and food . Sánchez has summarized Moncloa’s policy in two verbs: advance and protect and has recalled other initiatives carried out, such as the modification of the contribution brackets of the self-employed, the ICO credits and the social shield approved during the worst months of the pandemic.

Share
Facebook
Twitter
Pinterest
WhatsApp
Previous article
The best therapy is simply to love yourself.
Next article
The head of the Bundestag defense committee criticized Scholz for refusing to supply tanks to Kyiv KXan 36 Daily News