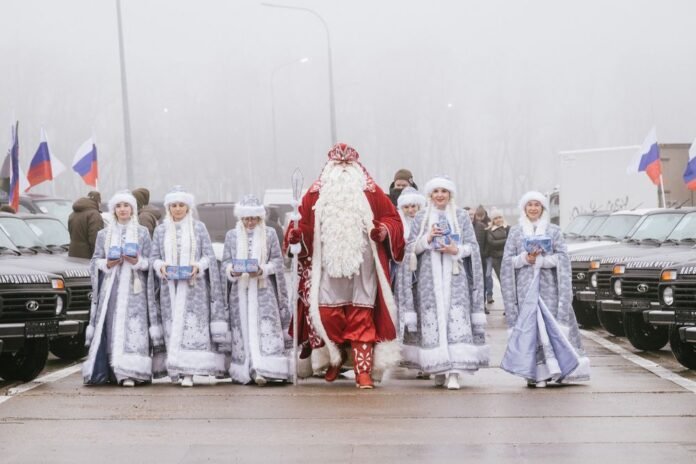 “We support you with all of Mother Russia and sincerely hope that soon we will celebrate the victory together,” Father Frost addressed the military.

Among the gifts collected by the Popular Front activists within the framework of the “Everything for Victory!” project were all-terrain vehicles and everything that soldiers on the front line need.

– Each car has a mobile toilet. On the stove there are enlarged 50-liter tanks, which means that ten people can safely wash themselves. The cars also contain guitars signed by Dmitry Pevtsov, Yuta, Denis Maidanov and Alexander Sklyar and other famous musicians, – said Mikhail Kuznetsov, head of the Popular Front executive committee.

– Moved to tears, mascara flowed, – admitted the deputy of the State Duma of the Russian Federation Zhanna Ryabtseva, who put on the costume of Santa Claus’s granddaughter. -She really wanted to hug all the fighters. Today, some kind of miracle is just happening, people have come together. Emotions soar. Thank you very much to all the inhabitants of the country who were able to participate in the New Year’s meeting of the Popular Front.

The fighters, to whom the real Ustyuga Santa Claus and Snegurochka come with gifts, have wild emotions. They enjoy the holidays like children. Photo: ONF press service

The first flight to the area of ​​the special military operation sent 37 off-road vehicles and another 20 vehicles will leave for the front line in the near future. The operation is carried out under the protection of the military, and this is not by chance.

– In Ukraine, Santa Claus was declared an “imperial symbol” and a “Soviet propaganda tool” invented by Stalin to distract the population from mass repressions. In addition, for the artillerymen of the Armed Forces of Ukraine, a caravan of cars with New Year’s gifts for Russian soldiers is a desirable goal. Therefore, all movements of Santa Claus on the front line are kept secret, said the official representative of the NM LPR, Major Ivan Filiponenko.

Share
Facebook
Twitter
Pinterest
WhatsApp
Previous article
The latest news about the situation around Ukraine on December 28, 2022: the monstrous losses of the Armed Forces of Ukraine are revealed, Lavrov predicted the future of the independents
Next article
US Supreme Court upholds Trump’s restrictions on migrants KXan 36 Daily News