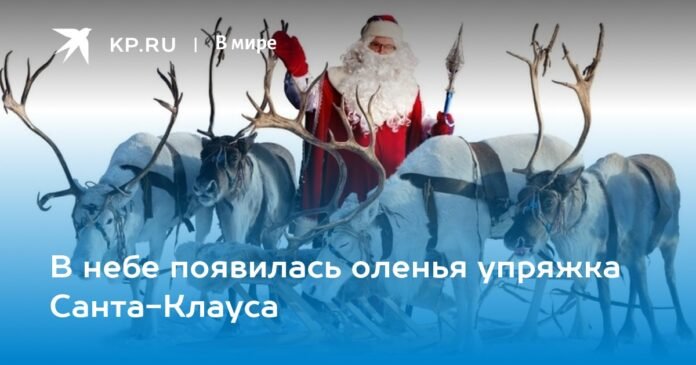 On the Internet sites that track the movements of aircraft around the world, a team of magical reindeer from Santa Claus appeared.

On Christmas Eve, a Russian colleague of Santa’s on a reindeer sleigh delivers gifts to children around the world, his movements being tracked by the North American Joint Aerospace Defense Command (NORAD).

Radars “fix” the appearance of the team in various parts of the world. In recent years, Santa flew over Russia. But whether NORAD will decide this year that the fairy tale character should not cross the Russian border due to sanctions is tonight’s main intrigue.

Last year, Santa Claus flew over Moscow at 22:15 Moscow time. Before that, he appeared in the sky over the cities of the Volga region, the Urals, Siberia and Chukotka.

For the 67th consecutive year, NORAD has been tracking the movements of Santa Claus on the eve of a major Catholic holiday. And according to reports (and time zone distribution), Santa’s reindeer start their journey in Australia, then move on to the Asian region, Africa, Europe, and then the New World and Latin America.

For the observation, 47 radars are supposedly used, as well as satellites with infrared sensors that react to the heat from the nose of the team leader, Rodolfo the reindeer.