Semyon Slepakov, who fled to Israel, mocked the Russian soldiers and disgraced himself. 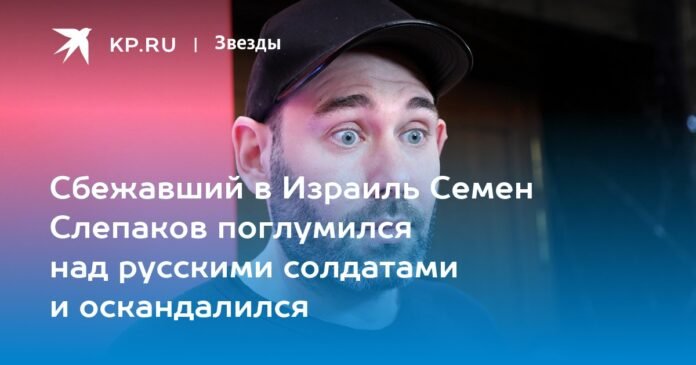 Semyon Slepakov angered the Russians with a new song called “Lullaby”. The people saw in him a mockery of the Russian soldiers. Citizens called for a ban on the artist who fled to Israel to earn money in Russia.

Semyon Slepakov immigrated to Israel a year ago. The showman actively gives concerts abroad and ensures that he is doing well. Until recently, he did not make any statements about Russia or the Russians. And the other day I put a song on the blog.

The once beloved comedian in his homeland ridiculed the death of soldiers. He sang on behalf of a mother who lost her son in the NWO. The Russians saw this as a mockery. The composition aroused popular anger. Curses fly to the direction of the artist.

Journalist Andrey Sidorchik also spoke about this: “Semyon Slepakov, who hangs out in Israel, decided that a great topic for his new mocking song is the mother of a dead soldier. Russian, of course. Sema, and let’s go to give something like that about the mother of an Israeli soldier. I really want to see how long your stay in the promised land will last after that.”

The columnist of “Komsomolskaya Pravda” Alexander Grishin wrote on the kp.ru site: “Sema issued the most perfect standard abomination – this is his” Lullaby “, christened by him” satirical “. In the text of which, speaking on behalf of from Russia, the Motherland, mockingly sings about Russian soldiers with a soothing song for a three-year-old baby This is not satire, but some kind of abomination, rot, stench, mucus, dance on graves and mockery of true mothers who buried their sons-heroes…”

Senator Konstantin Dolgov was also outraged. He said that for discrediting the Armed Forces of the Russian Federation, the comedian should not only be deprived of citizenship, but also banned from all concert activities in Russia, including corporate parties.

But earlier, Slepakov received tens of millions of rubles in Russia. He was one of the highest paid comedians in the country and received at least 4-5 million rubles for his presence at private events.

In Israel, the price tag had to be revised, Semyon reduced the fee for corporate parties to 2.5 million rubles, the prices for his concerts also fell.