HomeLatest NewsSergei Shoigu made a statement on the completion of partial mobilization.
Latest News

Sergei Shoigu made a statement on the completion of partial mobilization. 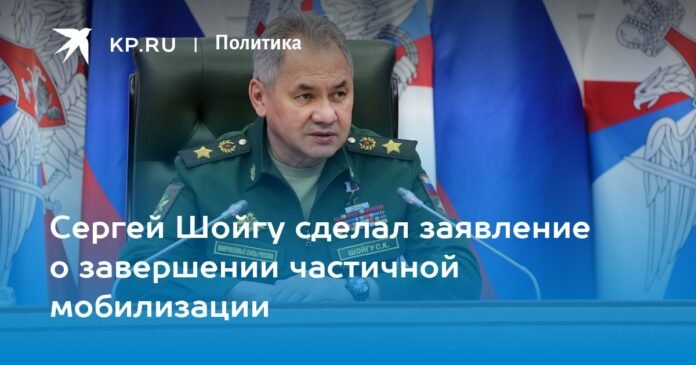 “I understand that this job is not optional, not on a case-by-case basis. This is the kind of job that requires constant daily attention. I would very much like it to be built according to plan and effectively. The work is very important and, most importantly, it is not for one day. This must be understood. Problems arise, then they are solved, other problems arise,” the Russian defense minister said.

The head of the Russian military department noted that the idea to create this coordination group arose almost simultaneously with the start of partial mobilization to support military personnel and their families. The president supported this initiative.

– We have completed the mobilization, the partial mobilization. There were many difficulties, many problems. Here I can’t help but say that we managed to solve most of the problems and problems quite quickly. Initially, we try to make sure we don’t hide anything from anyone. There are problems, it is necessary to solve it. For this I would like to thank many, – said the head of the military department.

Shoigu emphasized that each deputy and each senator today represents a certain region and party. And the special operation and mobilization concerns everyone, all subjects and all settlements.

“Of course, we need the help and support of senators and representatives. Those people who were elected from this region, and to whom the people entrusted them to represent their region, their city in the country’s Parliament”, stressed the minister.

Recall that the working group to ensure the interaction of public authorities and organizations on issues of mobilization, training and mobilization, social and legal protection of citizens of the Russian Federation participating in a special military operation, and their families will constantly monitor the disposition of the mobilized citizens. and a host of other problems, associated with SVO.

Likewise, the tasks of the group include participation in informative and explanatory works on topics related to mobilization, training and mobilization, analysis of the state of work on patriotic education of youth and the elaboration of proposals for production surveys. of products necessary to satisfy the needs. needs of all types of troops and military formations.

The parliamentary coordination group included representatives of both chambers of the federal parliament and of all parliamentary parties, the Ministry of Defence, leaders of public organizations and prominent war correspondents. The working group is headed by Andrey Turchak, First Deputy Chairman of the Federation Council, Secretary of the General Council of United Russia.