HomeLatest NewsSergei Stepashin on the ceasefire in the NVO zone: "This is a...
Latest News

Sergei Stepashin on the ceasefire in the NVO zone: “This is a demonstration of someone who wants peace” 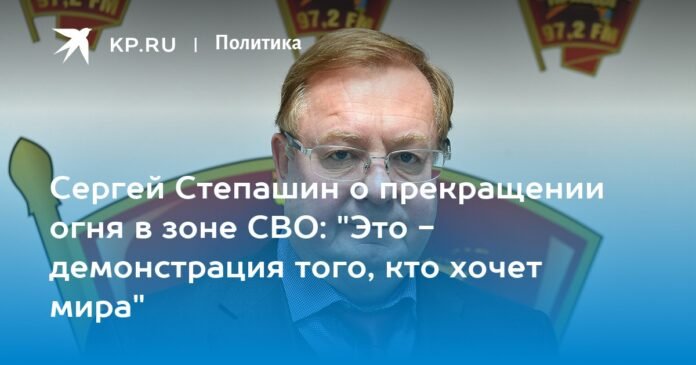 … – Sergey Vadimovich, we congratulate you on the upcoming and upcoming holiday …

– And we would like to discuss this very positive news – Russian President and Supreme Commander-in-Chief Vladimir Putin instructed Defense Minister Sergei Shoigu to introduce a ceasefire along the entire line of contact in Ukraine from 12 o’clock :00 hours from January 6 to 24. :00 on January 7. You know that this is the initiative of Patriarch Kirill. And the Minister of Defense has already given such an order…

– What can I say? In fact, this is a demonstration of someone who really wants peace.

Russia, despite its multi-denominational nature, has always been considered Orthodox Russia. As they consider themselves and many of those who live in Ukraine.

True, after the churches were taken there and our believers could not pray in the kyiv-Pechersk Lavra, I have serious doubts about their sincerity…

And yet this (the initiative of the Patriarch, the instruction of our President and Supreme Commander, the order of the Minister of Defense) is a sign for Ukraine, at one time, for one people, as we all believed that we should think in peace.

At least in these days of Christmas.

– Will it be understood and accepted by the Ukrainian side?

– Honestly, I have doubts for a simple reason.

It’s not just the Ukrainians. “Himers” are the US, the artillery pieces are France, the tanks are France, England… And they have nothing to do with orthodoxy.

But I want to emphasize again – Russia, in this case, through the mouth of the President and our Patriarch, says that – let’s at least start with this, from peace for the sake of the people, for the sake of a single Orthodox world. ..

– Sergey Vadimovich, we have already written and reported on Radio “Komsomolskaya Pravda” that you, as chairman of the board of directors of the Territorial Development Fund, together with general director Ilshat Shagiakhmetov, traveled to Mariupol, met with ordinary people, delivered about the keys to the new apartments. How do you think this initiative of the president, the patriarch and the order of the Minister of Defense will be perceived by ordinary people with whom you communicated?

– It’s quite obvious – in Mariupol too… Well, thank God, now a peaceful life is being established there and there are no such terrible attacks.

But, as for Makeevka and especially Donetsk, and other cities of the DPR, of course, they will be happy …

I have already said that when we met with the head of the Donetsk People’s Republic, Denis Pushilin, he said that as far as Donetsk is concerned, it is simply dangerous to live in this city. Although hundreds of thousands of citizens live there.

Can you imagine how they are waiting for this world? Every day they beat and beat … – civilians, residential buildings.

Therefore, I repeat, this Christmas sign from Russia, is also addressed to the so-called “negotiators”.

And if this truce, even if temporary, does not come about because of the Ukrainian side, then let’s see how the Macrons and the Bidens react… And I’m not talking about the German chancellor, the famous “pacifist”. ..

– Can you tell me where you are going to celebrate Christmas?

– In Kazan. We are here for five days, I go here every year.

Here is a magnificent church, inaugurated by the Patriarch two years ago. There is also the only church in our country, which is, in fact, underground: it was once opened by the Grand Duchess Elizabeth Feodorovna.

And there is the Kazan Icon of the Mother of God, the very icon that has always consecrated our soldiers for Victory and in the name of Victory. So, I’ll be there.

– And what will you ask the Lord?

Victory in the name of peace, I would put it that way.

Victory over evil in the name of peace. So, that would be the exact wording.

– I was recently in Kazan with the head of the Ministry of Emergency Situations, Alexander Kurenkov, just a week ago … There is such beauty! Sergei Vadimovich, I wanted to call you tomorrow, now I won’t bother you. And right now you can address everyone who will celebrate Christmas tomorrow. After all, you opened churches not only in Russia, but we were also in Syria, Israel and Palestine …

– First of all, I am glad that this holiday has become a state holiday.

Because I remember as a child, in Leningrad, we always celebrated Christmas at home, especially my grandmother, she was a believer.

But it was such a forbidden party, and in order to discourage the interest of our citizens, they showed good movies and a concert of foreign pop artists. This was the story on the night of January 6-7.

And I want to wish everyone, probably, this is now the main thing for us, in our country – peace, kindness, prosperity.

Once again I say: peace, goodness and prosperity. All together!

– Thank you. I join the words of my old and beloved hero. All the best to his family and his friends, his loved ones too!

– Thanks. By mutual agreement, Alexander. Hello wife too. See ya.