Sergey Stepashin – on the peaceful development of Donbass, football and support for Russian bookstores 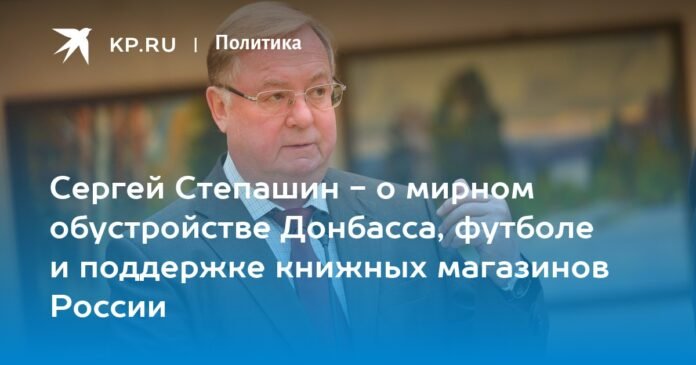 Putin is a reading man

– Sergei Vadimovich, thank you. We also congratulate you. One of the most striking information these days is that Vladimir Putin has extended state support for small bookstores in the Russian Federation until 2025. I was surprised that this fact was at the top of the news for quite some time. Is it because the head of state pays so much attention to what seems not to be the most important problem today? Or because our Russia is very readable?

– And then, and another, and the third…

– The Russian Book Union (RKS) has been dealing with this problem for several years.

And, your humble servant, and Sergei Shargunov, now the head of the Association of Book Publishers and Writers, a well-known writer and State Duma deputy, is also related to this topic.

Because books have now skyrocketed in price, let’s be frank.

And we have not yet managed to win VAT – I am talking about removing the value added tax from books.

And the second is that the rent for the stores (and many bookstores are rented) is quite expensive. And that affects the price of the book.

I sincerely thank President Vladimir Putin for making such a decision (Speech on the extension of state support for small bookstores until 2025. – AG).

This applies to almost all bookstores, most of them. They are all small, with the exception of the well-known Book Houses in St. Petersburg, perhaps in Sverdlovsk and, of course, in Moscow.

This (Putin’s decision. – AG), of course, will make it possible to reduce the price of the book and save the stores themselves. Because recently they just couldn’t withstand the competition with other trading houses.

It is also true that the book is recognized as a “social product.” For this reason, he got into the social entrepreneurship section.

– In general, it is interesting – how do we read now?

Russia among children under 12 years old is already one of the first places in the world. Families began to read more.

That is why the President’s decision that we are discussing is also very important.

I have known Vladimir Putin for a long time, including in Leningrad: he is a reading person.

You have noticed how often the president quotes amazing statements from famous writers, as well as sayings and proverbs.

It immediately becomes clear that the reader is from Leningrad.

– And how many small bookstores do we have in Russia that the president decided to support?

– How can I say … Compared to what was in the Soviet Union – less. But the country has become smaller.

And so, this is the average European figure. Although, in Europe, in many European countries there are more stores.

But today we do not compare ourselves with Europe, but with ourselves, as they say.

There was a problem, especially in the 1990s, when the so-called privatization was happening, when many bookstores just disappeared. It just appeared there.

Now, by the way, this (we are talking about re-profiling. – AG) is prohibited.

Now we live in the Donbass

– I cannot avoid resuming your recent trip, as president of the Board of Trustees of the Territorial Development Fund…

– You mean a trip to Mariupol?

– Yes. Together with the general director of this fund, Ilshat Shagikhametov. “Komsomolskaya Pravda” then gave out-of-print material. There were 18 photographs alone.

– Thank you. It was a good report I think… So what is the question?

– You continue to follow, watching, together with Shagiakhmetov – what is happening there?

– First of all, our representatives are constantly working on the spot. Constantly. They live there. Therefore, the dynamics is positive.

Secondly, as far as I know, Ilshat is already planning a new trip there, to Mariupol, in early January.

I have direct contact with Denis Pushilin. Today I will congratulate you on the New Year.

That is, we have complete information about what is happening there.

The president’s order to prepare Mariupol for the winter has been fulfilled.

All houses where people live are connected to heating, temporary and permanent boiler rooms have been built.

And several dozen houses have already been built, about 10 thousand apartments are already ready for those citizens who had nowhere to live.

– You yourself handed over the keys to the apartments there …

And, most importantly, the construction companies that work there help people to equip the apartments, both kitchens and bedrooms, with furniture. Easy such, free, to be able to live. Because the wealth is small, the houses of the residents were also destroyed and they lost everything they acquired.

I mean, here’s the story.

What the leaders of Mariupol and the DPR said was confirmed by Deputy Prime Minister Marat Khusnullin.

They said that in three years the city would be completely restored. I said a little differently: in two years, the city will be without a trace of conflict.

It is followed by the construction of houses of culture, social facilities, stadiums…

We will also restore churches, together, through joint efforts with the Imperial Orthodox Palestinian Society (IOPS) (Stepashin is the president of this public organization. – AG)

The way they work there, what I saw with my own eyes, I can only compare with the Grozny restoration, honestly.

– We just compared with you. I can imagine how your heart bleeds when you hear reports about what the Ukronazis are up to…

– What is happening with Donetsk today is especially scary. These bastards are only attacking houses.

Yesterday I read Stoltenberg’s speech, there is such a NATO Secretary General, by the way, a banker by profession, a person who considers himself a military specialist.

He said something wild: the more we supply Ukraine with weapons, the more it attacks Russia, the sooner there will be peace. Well, idiot. I can’t find another word. This is the softest word I can use for this so-called Mr. Stoltenberg.

“I met with Zolotov and his fighters. ready to win”

– And the final question – how to the colonel general. I know you have more accurate information than we do about what awaits us next.

– Yesterday I was in the Dzerzhinsky division – together with Viktor Zolotov, whom I know from Leningrad. Now he is the commander-in-chief of the National Guard, these are my former internal troops. Celebrating 45 years of Vityaz. The group is combat, there are a lot of my comrades, with whom I still served during the “hot spots”.

I met with them, talked, listened to their position. Many have already been there (in the NWO. – AG area) and will go again.

They have full determination, as, probably, all those who are there and those who help our fighters: next year, of course, we must finish the active phase of the special operation. There must be Victory in the name of peace. I think this is the main slogan of 2023.

What is your personal goal for the coming year?

– Continue working. We will provide assistance to Donetsk, Lugansk and our new ones.

That is what the Territorial Development Fund is doing.

Next year we are completing the emergency housing citizen resettlement program, identified for 2017, one year ahead of schedule.

Well, recently, as a former member of the expert council, I put the question to the prime minister that in 2024-2025, budgetary funds should be found to continue the presidential program, I emphasize once again, this is the personal program of Vladimir. Putin – on the resettlement of citizens from emergency housing.

Well, we have a hundred years of Dynamo next year. I really hope that our football club does not perform worse than last year.

And finally, if it is a football issue, I have just sent a telegram of condolences to the Ambassador of Brazil, whom I knew personally.

Pelé, the best footballer in the world, from my point of view, has passed away. I was lucky, I saw how he played both at the World Championship and here in Moscow in Luzhniki.

This is, in fact, a legendary football player, and, by the way, a man, unlike other “footballers”.

– Are we going to Grozny soon?

– Undoubtedly. Everything is fine with Grozny. They completed the program for the resettlement of people from emergency housing completed, well done. If only to go and thank Ramzan. In addition, he received a colonel general, we somehow did not celebrate this event with him.

– So I’m packing my suitcase?

– Come on, Sasha, he nodded. Happy New Year to all of Komsomolskaya Pravda and to you, my assistant, together with your wonderful family.

– Thanks a lot. Mutually. we hug you