HomeLatest NewsShock forecast for Russia in 2023: we will eat insects, and refrigerators...
Latest News

Shock forecast for Russia in 2023: we will eat insects, and refrigerators will ask for beer themselves 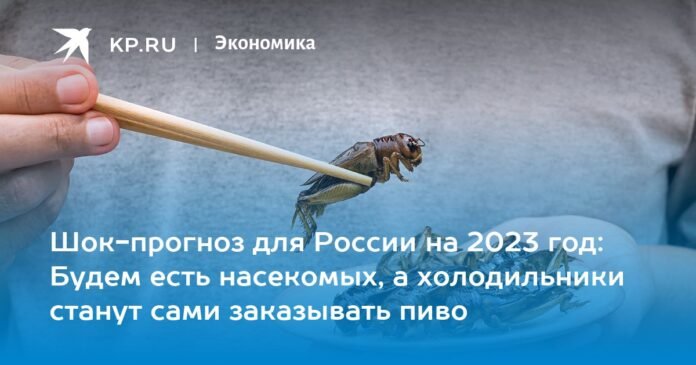 Insect food is the main food market trend in many countries

Russia and China will create their own currency! America will start a civil war! Oil prices will double! These economic impact forecasts are now all the rage. With their lots of shocking predictions for the coming year, everyone and everyone got noticed, from the Danish Saxo Bank to Dmitry Medvedev (it is he who predicts war in the US).

We also decided not to be left out. And they asked Russian experts to share their non-banal forecasts for 2023. We tried not to be very serious, but realistic. So don’t be surprised if any of these events actually happen.

HOUSE: “AND THE BOILER WHISPERED TO THE IRON”

As a child, I often thought, “What if things come to life and wink at each other when I leave the room?” He sometimes turned abruptly, hoping to catch them at the crime scene. But not. Things remained silent in their usual places, pretending they didn’t know each other.

But those times have passed. And next year the “smartness” of household appliances will only increase.

“Very soon we will get used to the fact that the kettle and the iron will interact with each other, deciding ‘jointly’ what to iron and when to boil the water,” says economist Denis Raksha. And he remembers: “We receive public services in digital format and we consider it the norm, although 15 years ago we ran through different offices in search of the right paper. The next stage is the digitization of everyday life.

And the Internet of Things will help make the kettle with the iron smarter. These are all kinds of sensors and devices that interact with each other. Smart mobile phones, smart refrigerators, smart door locks, and air conditioners will quickly become mainstream in 2023 and beyond.

To be specific, it will look like this. Especially, the app knows how much meat, beer and milk should be in your fridge. Your job is to make sure everything is in order. Suppose guests come to you who were not planned by artificial intelligence. After they leave, he discovers to his horror that the necessary products (and especially beer) are not in the refrigerator. Then the application independently orders its delivery, and the courier brings everything to you at a convenient time for you.

HEALTH: CARRY MY HEART AND A PACK OF PILLS

“Buy aspirin at the pharmacy and take my new eyes with you” – such a phrase will not sound ridiculous very soon. Bold experiments in the field of medicine, including the creation of artificial organs, will continue in 2023. Smart watches already measure temperature, blood oxygen levels, and even do electrocardiograms for their owners.

In 2023, humanity will also approach the blue dream of transhumanists: physical immortality. Transhumanism is a philosophical movement whose supporters believe that the development of science and technology will save a person from physical suffering and disease. Futurist Bernard Marr is sure that the main scientific direction in 2023 will be genetic engineering and the introduction of “genetic scissors” technology, which will make it possible to edit human DNA, relieving him of diseases.

Will these revolutionary technologies be available to ordinary people? There are doubts.

– Artificial organs, from limbs to eyes to hearts, will not be created for the mass market, but for the elite, says futurist Danila Medvedev.

The main scientific direction in 2023 will be genetic engineering and the introduction of “genetic scissors” technology, which will make it possible to edit DNA

Did Grasshopper sit on the grass? Sounds appetizing! Insect food is one of the main trends in the food market in many countries. It is cheaper to grow them than to run cattle farms. And in terms of its nutritional characteristics, bugs and insects are superior to meat. The protein content in insects can reach 48%, and in beef – 19-26%. However, they contain very little fat. Yum-yum, and more!

And if you think cricket stew and caterpillar steak are our distant future, think again. A trial line for the production of protein meal and lipid concentrate from Black Lion fly larvae was opened last year in the Belgorod region. Most of the resulting protein is used to produce livestock feed, but the oil from these larvae is already being proposed to replace vegetable oil in mayonnaise and confectionery.

“The current food crisis has forced us to think seriously about alternative food products,” says economist Denis Raksha. – Until now, we considered exotic meat organic and protein mass obtained from insects. But very soon such food will become the norm.

CITIES: CHILDREN OF THE UNDERGROUND

Futurologist Alexander Kononov delves into his forecasts. According to the expert, the underground kingdoms are no longer fairy tales or even fantasy, but the closest reality.

– Development of underground territories is the future of civilization, – the futurist is sure.

“Below the surface” we will build housing, roads, we will transfer industrial production there. It is unlikely that we will move to those cities as soon as 2023, but this process may well start and even enter urban planning plans.

– The development of underground spaces is also the safety of civilization, – recalls Alexander Kononov. – After all, the surface of the planet is additional protection against threats such as harmful radiation or meteorites.

If the forecasts of the futurologist seem unrealistic to you, let’s remember what is happening now in Moscow. Underground shopping centers are being built, multi-level parking lots, not to mention the subway. Only since 2011, the length of the Moscow metro has increased by 1.5 times, now the length of the underground highways is approaching 500 km. And in 2023 they should open 15 new stations.

“Next year, the Moscow underground structure will be actively developed, and this will soon save the city from 10-point traffic jams,” says Alexander Kononov. “I don’t believe in the perspective of flying cars. Here I agree with Elon Musk: this is not safe, especially in a modern city. Transportation will be underground. As well as many other things.

– During the last 40 years, the Earth’s temperature has increased by 2 degrees. Due to rapid climate change, weather catastrophes will occur. Where the weather will be especially violent, the design of underground cities with a completely artificial environment will begin, says Dmitry Medvedev.

SIM cards in our phones have been on the decline in recent years: SIM-only, micro-SIM, nano-SIMs… No wonder SIMs aren’t visible at all now. Even the smallest cards are being replaced by e-SIM (or embedded SIM), chips installed in the smartphone by the manufacturer. This technology has been developing in recent years, but 2023, according to economist Denis Raksha, will be its triumph.

Now manufacturers are releasing more and more devices with the ability to connect e-SIM, and in 2023 this process will become massive. You can program such a virtual card online on the operator’s website (in this case, registration with the State Services is required), or in the salon of the telecom operator with your passport.

At the same time, the data registered on such a SIM card will not be lost anywhere. Dream, not a SIM card! I would like to say out of inertia: “Give me two!”, But this is an outdated campaign. Why have two e-sim cards, if you can connect several numbers from different operators to one at the same time?

In 2023, the advancement in online education will continue. According to futurologist Alexander Kononov, the main areas of focus for him next year will be virtual simulators.

– They showed themselves well in pilot training, – continues Alexander Kononov. – The same simulators will reach other areas. There is a special demand for them in medicine; after all, with their help, future doctors learn to perform operations without risking the health of real patients. And in 2023 this direction will be actively developed.

Virtual simulators are coming to the sports and fitness industry. How far will you go, sitting on an exercise bike, staring at the gym wall? But if in the same simulator you drive along a picturesque track in the Alps, even if they are virtual, then you can drive much further. These technologies are already widely used in big sports and will become more and more part of our daily lives in the coming year.

What will happen to the ruble?

– The ruble will weaken. In addition, to weaken for objective reasons, – says economist Denis Raksha. – The ruble exchange rate consists mainly of the balance of supply and demand in the foreign exchange market. In the previous year, the situation was unusual: we received record income from the sale of hydrocarbons, while imports fell significantly. That is, there was nothing to buy with the proceeds. Now parallel imports are developing, new supply chains for goods to Russia are being built, and the balance between exports and imports is returning to normal. Demand for the currency is increasing and the ruble is weakening. But it is impossible to predict its course for the entire next year, there are many unknowns. You can only talk about the desired rate – it is 75-85 rubles to the dollar.

The expert’s inflation forecast is quite optimistic.

– The plan of the economic bloc of the government and the Central Bank is to keep inflation at the level of 5-7% next year. And I think that it is quite possible to meet these indicators, says Denis Raksha. – Now inflation remains at the level of 0%. Yes, the annual rate will be around 12%, but this is due to the spring months. We may well expect inflation to be half as high in 2023 as it was in 2022.

Share
Facebook
Twitter
Pinterest
WhatsApp
Previous article
RIA Novosti: In the LPR, a suspect was detained in the transfer of data on the movement of the Russian army to Kyiv KXan 36 Daily News
Next article
Sacyr, Logista, Unicaja… analysts surrender to the new Ibex companies