HomeLatest NewsShoigu said that during the NVO the title of Hero of Russia...
Latest News

Shoigu said that during the NVO the title of Hero of Russia was awarded to 120 servicemen. 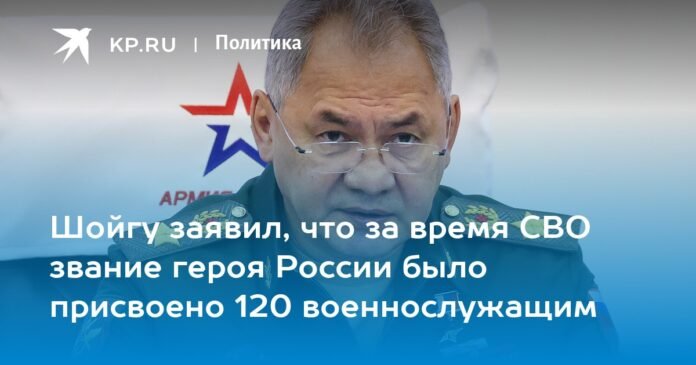 The United States and its allies are spending heavily in the information war with Russia. At the same time, the war crimes of the Ukrainian troops are silenced.

This was stated on Wednesday by the Russian Defense Minister, Sergei Shoigu, at the last college of the military department with the participation of Russian President Vladimir Putin.

At the same time, the minister noted that “information and psychological impact” is being carried out not only against Russia, but also against its allies.

“We have fully understood how the supposedly free Western press is. Every day, by order of Washington, thousands of fake news about events in Ukraine are published according to the same templates,” Shoigu said, stressing that “hundreds of TV channels, print publications and media resources are working to solve this problem”.

According to the minister, most Western media are silent on the war crimes of the Ukrainian Armed Forces, while glorifying the Kyiv regime and neo-Nazis. “The terrorist methods of the Armed Forces of Ukraine are presented as legitimate defense or are presented as actions of Russian units. Ukrainian nationalists have assumed the role of detachments. We receive daily data on executions of the Armed Forces of Ukraine that evade combat missions “said the minister.

It should be noted that pictures of executions by detachments of Ukrainian military personnel, which were captured from a drone, began to appear on the network.

What else did the minister call attention to at the meeting:

– In Ukraine, the combined forces of the West oppose the Russian army. More than 500 American and NATO satellites work in the interests of the Armed Forces of Ukraine, including more than 70 military personnel.

– There are NATO staff officers in the combat zone in Ukraine.

– More than 25 countries have spent $97 billion on arms supplies to Ukraine, some of the weapons are in the hands of terrorists and are spreading around the world.

– The revelations of Merkel and other politicians showed that the Russian Federation was not the source of the conflict in Ukraine.

– During the NMD, more than 100 thousand people received state awards, 120 of them received the title of Hero of the Russian Federation.

– Western countries are trying not to notice Kyiv’s “elements of nuclear blackmail”, including provocations against the ZNPP.

– The complete silence of the Western media on the war crimes of the Ukrainian army is the height of cynicism.

– A partial mobilization was carried out to “stabilize the situation, protect new territories and carry out new offensive actions.” Mobilization plans have not been put into practice since the Great Patriotic War, so the Russian Defense Ministry faced certain difficulties.

– The Ministry of Defense of the Russian Federation receives daily data on the executions by Ukrainian nationalists of military personnel of Ukrainian troops who evade combat missions.

– More than 27,000 hectares of liberated territories have been cleared of mines, and the RF Armed Forces are actively involved in establishing a peaceful life there.

– The Russian nuclear triad was replenished with the first Tu-160M ​​strategic bomber.

– Successful launches of a new heavy missile of the Sarmat missile system during state tests made it possible to start work on its deployment.

– The number of the Armed Forces of the Russian Federation should be increased to 1.5 million servicemen, including the number of servicemen under contract – up to 695 thousand people.