HomeLatest NewsSobchak spoke honestly about the scandals with Bogomolov: "My husband is unbearable"
Latest News

Sobchak spoke honestly about the scandals with Bogomolov: “My husband is unbearable” 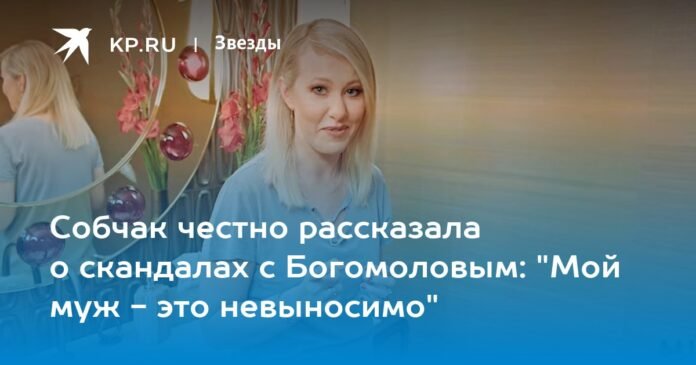 Ksenia Sobchak impressed people with her elegant house on Rublyovka with six-meter-high ceilings and a dressing room, seeing Philip Kirkorov would burst with envy. The television presenter has no qualms about showing luxury, as she earned it with her own work. That’s just because of the rich interiors, she has to fight with her husband Konstantin Bogomolov.

Ksenia Sobchak completed many years of construction of a luxurious mansion on Rublyovka a few months ago. The woman put a lot of effort and invested a lot of money to make everything fit with her dream home idea.

Photo: frame from the video of Ksenia Sobchak

Konstantin Bogomolov’s wife has been building a nest for almost six years and now she is not averse to bragging about the work done. On her YouTube channel, she talked in detail about the details of the interior. Here is a huge dressing room with a secret, and a bathhouse better than Anastasia Volochkova herself, and marble, and stucco, and the same discord fireplace for which she owes three million, and carpets made of natural wool.

The blonde believes that rugs add comfort, it is warm and pleasant to walk on them. In response to a guest’s question about whether it was philistine to put expensive carpets and rugs everywhere, Ksenia literally exploded. It turned out that it was over the carpets that Sobchak often quarreled with her husband, the director.

“My husband Bogomolov is unbearable! This is the only reason why my husband and I fight all the time. He only likes bare floors, and I really love carpets,” the star admitted.

Apparently, Xenia did not take into account the opinion of her faithful. She even put carpet in the bathroom.

The TV presenter bragged about stylish interiors. Photo: frame from the video of Ksenia Sobchak

By the way, in Xenia’s living room there are two chandeliers with a total weight of half a ton. So one of them took it and collapsed, almost doing something terrible. By that time, the hostess should have already moved into her mansion, but by a happy coincidence, she was late.

Also, there is a secret room in the Sobchak mansion, and the TV in the living room is hidden behind a moving picture. The star watches movies in his own movie theater. Sobchak also showed people the real Chagall, who was introduced to him by Fyodor Bondarchuk.

The TV presenter bragged about stylish interiors. Photo: frame from the video of Ksenia Sobchak

Mosaic on the walls of the Sobchak house, naturally from abandoned Soviet factories. According to her demanding hostess, she held a tender for every little thing in her mansion.