Strategic partnership between Russia and China: what Xi Jinping discussed with Medvedev 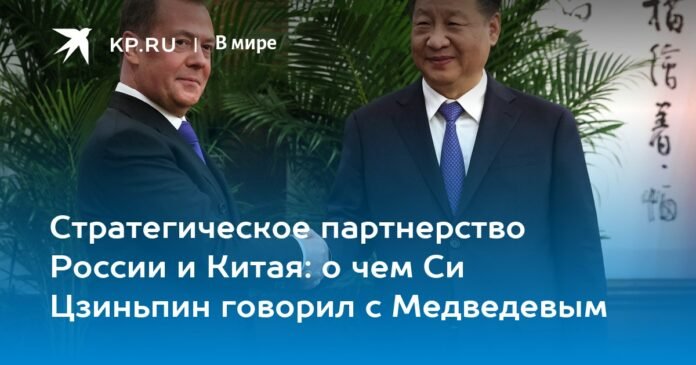 Deputy Chairman of the Security Council of the Russian Federation, Dmitry Medvedev, in Beijing before the start of talks with the General Secretary of the Central Committee of the Communist Party of China, Xi Jinping.

The visit of Dmitry Medvedev, Chairman of the United Russia Party, to Beijing on December 20-21 and his meeting there with the General Secretary of the Central Committee of the Communist Party of China, Xi Jinping, came as a complete surprise to politicians and experts. in other countries of the world. It was officially emphasized that the communication has a cross-party format: the guest came at the invitation of the CCP, and at the welcoming ceremony held at the Diaoyutai State Residence, the Chinese Communist Party’s hammer and sickle banner was put up. the foreground. But, since it is well known that Xi is the president of the PRC, and Medvedev is not only the former president of the Russian Federation, but now holds the position of vice-president of the Security Council of Russia, which is very high in the country. political hierarchy, international observers suspected that partisan ties were just camouflage, and in fact the talks discussed specific issues of current world politics and, possibly, coordinated the joint actions of the two powers against the background of deteriorating statehood. overall security. .

The West began to speculate – what could contain the personal message of Vladimir Putin, which Medvedev conveyed to the Chinese leader – a message about immediate plans in the NVO area, Russia’s reaction to the possible development of the situation around Taiwan, proposals to combat economic sanctions? But none of these speculations were supported by real information.

The meeting of the Russian and Chinese delegations was held at the Diaoyutai State Residence.

Dmitry Medvedev himself summed up the visit on his Telegram channel: “We discussed issues of interaction between the two ruling parties: United Russia and the Communist Party of China, we discussed issues of bilateral interaction of our strategic partnership with China in all areas, including , of course, the economy, industrial cooperation. We discuss international issues, including, of course, the conflict in Ukraine.”

And the English-language Chinese newspaper Global Times devoted a long article to the results of the meeting, in which, as is customary in the Celestial Empire, he clearly built the main conclusions that should be drawn from this event. First, over the past decade, China-Russia relations have withstood the test of international change and maintained healthy and sustainable development. It is a long-term strategic choice that both sides have made based on their respective national circumstances. Second, regarding the crisis in Ukraine, China supports objectivity and justice and actively promotes peace negotiations. The West, already directly involved in the conflict, cannot play the role that China could play.

Some places in the West seized on these assessments of the situation in Ukraine and interpreted them in such a way that Beijing, they say, demands that Moscow “be in control and immediately come to the negotiating table.” But the most serious experts think otherwise. For example, the American publication Politico tends to believe that calls for “objectivity and fairness” are addressed to all states that are somehow involved in the Ukraine crisis, primarily the United States, and here China has the opportunity to pursue a more flexible policy. . As for the hopes that the PRC will turn away from Russia, suffice it to recall that China, time and again, clearly supports the Russian Federation in attempts by Western opponents to push anti-Russia resolutions in the Security Council of the ONU. And one more revealing fact: the meeting between Xi and Medvedev in Beijing took place on the same day that the joint exercises of the navies of the two countries began in the East China Sea. The greatest in history, by the way.