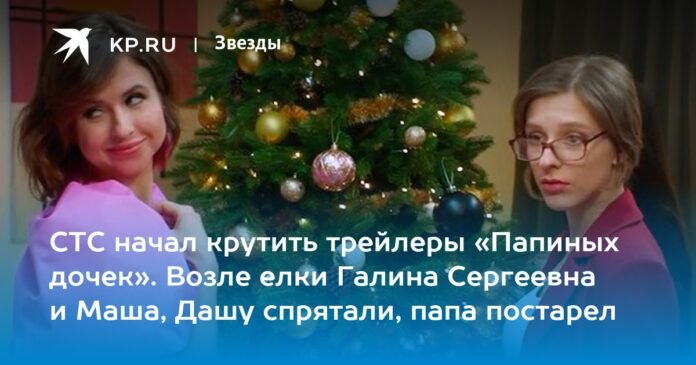 “I arrived by chance at the casting for “Las hijas de papá”, almost all of them were already recruited there. They gave me the ball – and that’s it! Five years of slavery! This is how actress Daria Melnikova remembers filming in the popular family comedy STS. However, for many viewers, the project has truly become a favorite, and its closure 10 years ago was upsetting.

However, the producers are enterprising people: not only can a dead researcher be revived, if necessary, but the whole family can return to the screens. This is what happened with “Las hijas de papá”, which will air again this year.

STS has already started playing teasers for the project. According to one of them, we can already understand which heroes we will definitely see in the project.

In a thirty-second video, Masha Vasnetsova (Miroslava Karpovich) and Galina Sergeevna (Elizaveta Arzamasova) decorate a Christmas tree. The scene is traditionally accompanied by a confrontation.

– Mash, well, where are you hanging? – Galina Sergeevna is boring. – He (the ball) is not from here at all.

“But it is so according to Feng Shui,” Masha jokingly replies and shakes her hips.

– Well, how else? – someone behind Galina Sergeevna loudly protests – we see only the heroine’s hand holding the ball. apparently this

– Dash, why is this here? -Galina Sergeevna addresses her sister and turns to her father, who is sitting in an armchair with an STS tablet. – Dad, tell them?

– Do not fight, – sighing, says the head of the family, Sergei Vasnetsov (Andrey Leonov). – What is the difference of how to decorate the Christmas tree? The main thing is that we are at home. We will meet soon at STS.

Inspired viewers began to hotly discuss the videos. In addition to the fact that the girls’ father has aged a lot, and they themselves have blossomed, the audience is interested in the cast of the project. For example, why have we never seen Dasha, who, as it were, takes part in decorating the Christmas tree? Actress Anastasia Sivaeva did not agree to act?

Or even more interesting, where are Zhenya (Daria Melnikova) and Polina (Ekaterina Starshova). Will they participate in the filming? At least Starshova’s mother assured that Buttons had left the country and was not going to return to Russia.

One way or another, the series will soon begin filming, and “KP” will definitely report on what is happening on the set.

Share
Facebook
Twitter
Pinterest
WhatsApp
Previous article
De Gaulle’s grandson: The West was planning a “plot” against Russia in advance – Rossiyskaya Gazeta
Next article
This is the application created by two people from Segovia that does not leave hoteliers and consumers out of the picture