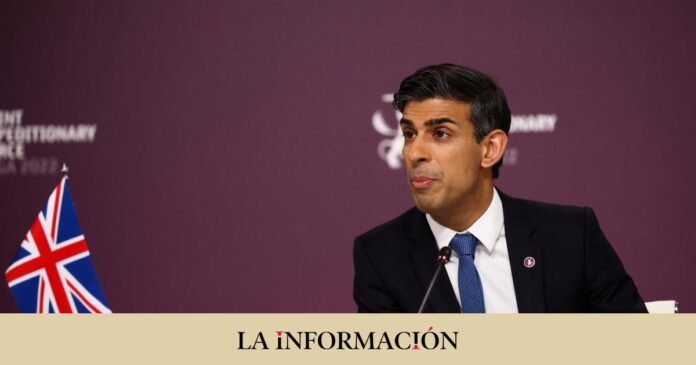 The British Prime Minister, the conservative Rishi Sunak, warned this Saturday in his New Year’s message that the problems that arise in the United Kingdom “will not disappear” in 2023. After acknowledging that 2022 has been a “tough” year for his country , the Tory leader will ensure that his government will take “difficult but fair” decisions in order to “keep the indebtedness and debt under control” of the United Kingdom.

The politician has promised that the Executive will put “citizens’ priorities” before it. Sunak came to power at the end of what has been a politically turbulent year in which three prime ministers (Boris Johnson, Liz Truss and Sunak) have paraded through Downing Street -the seat of Government-.

The current head of the Executive faces several challenges in the coming months, such as the increase in the cost of living or the numerous and continuous strikes called in various sectors -such as the nurses’ union and the railway industry-.

“Just when we are recovering from an unprecedented global pandemic, Russia launched a barbaric and illegal invasion of Ukraine,” he said when taking stock of the last year. The war in Ukraine, he added, has created a “profound economic impact” that has affected UK citizens, while ensuring that it will help the country’s “most vulnerable” to cope with the rising costs of energy prices. Energy.

In his speech, Sunak also recorded that he has taken decisive measures to reduce the delays that weigh on the public health system -NHS- and to deal with the problem posed by illegal migration. “I’m not going to pretend that all our problems will go away in the new year,” the prime minister said.

“But 2023 will give us the chance to showcase the best of the UK on the world stage, continuing to stand with our Ukrainian friends against the brutality of (Russian President Vladimir) Putin, and standing up for freedom and democracy wherever they are. under threat,” he said.

For his part, the leader of the Labor Party -main opposition group-, Keir Starmer, promised in his message that Labor will propose “a scenario for change” in 2023. Like Sunak, Starmer admitted that 2022 had been a year ” very hard” for millions of citizens across the country.

He also paid tribute to Ukraine for “showing such bravery fighting for their freedom” and said the UK should “again stand up for Ukrainians.” The Labor leader pointed out that his country needs to become “a fairer, greener and more dynamic country” and assured that he wants to “restore faith in politics as a force for good.”