“Surcharges and royalties”: Mark Varshaver told how much Alexander Zakharov receives, “fired” from the theater 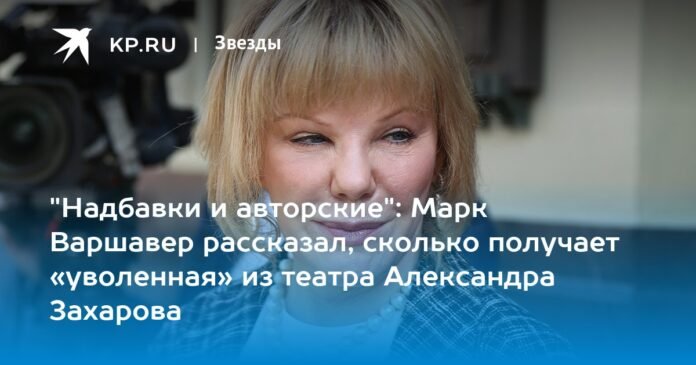 The other day in the Youtube program “Empathy Manuchi” actor Stanislav Sadalsky said: actress Alexandra Zakharova, daughter of the late director and artistic director of Lenkom Mark Zakharov, was fired from the theater named after her father.

The other day in the Youtube program “Empathy Manuchi” actor Stanislav Sadalsky said: actress Alexandra Zakharova, daughter of the late director and artistic director of Lenkom Mark Zakharov, was fired from the theater named after her father. For example, director Mark Varshaver settles scores with her.

– Sasha (Zakharova) was expelled… Varshaver kicks her out. All of Moscow is talking about it,” Sadalsky said. – I told Sasha – do not be upset. This will not always be the case. This is the favorite expression of Lyuda Maksakova (People’s Artist of Russia, a friend of Sadalsky – Ed.). Previously (under Mark Zakharov – Ed.), Sasha was fine. And then she had to understand: she will not always be like this … But now she has a different life. And it won’t always be like that either.

– Do you think it is fair that Alexandra Zakharova is expelled from the theater that her father created? -Manucharov exacerbated the topic, who, most likely, does not know that this theater appeared much earlier-last fall, Lenkom celebrated her 95th anniversary-Before she shone, she was a cousin …

– There was… But it will not always be so, – repeated Sadalsky. – Sasha is a beautiful actress. In “Marriage” she played great. She was removed from the role of Agafya Tikhonovna’s girlfriend. Varsoviaer (theater director) settles scores…

On the web, the news that Zakharova was “kicked out of the theater” instantly dispersed. Rumors also reached Lenkom. The theater responded to Sadalsky, who “for the last decade has been known more as an outrageous fake news reporter, apparently another fable was dreamed up in a New Year’s dream…. This time, it is allegedly about the dismissal of Alexandra Markovna Zakharova from Lenkom.

On its Telegram channel, the theater gave a rebuttal:

“Maybe Sadalsky is an illusion, but Alexandra Markovna continues not only to act in performances of the Cherry Orchard Theater and The Marriage of Figaro, but also receives quite a decent salary of 158,000 rubles a month. In addition, she receives a pension and a monthly allowance of 30,000 as a People’s Artist of the Russian Federation. Then no one encroached on the status and financial position of the famous actress. Unless Sadalsky himself and publications spreading lies. The theater is forced to file a lawsuit for these facts.

Unfortunately, the role of Agafya Tikhonovna in the play “Marriage” Alexandra Markovna Zakharova does not really play this season. In the seventh ten, playing a girlfriend, even in a Gogol play, is not very smart. Why mislead the audience? It’s like Sadalsky and company. But this is not “on Lenkom’s way”.

“KP” asked the director of the theater Mark Varshaver how much the “fired” actress Alexandra Zakharova receives.

– Once again I repeat: no one fired Alexandra Markovna. She works in the theater, she plays in two roles,-confirmed Mark Borisovich. – She has a decent salary: on average for the past year – 158 thousand per month (this is a salary of 135 thousand plus additional payment for each performance played). In addition, she receives a pension from the state and 30 thousand (monthly allowance) for the title of People’s Artist. In addition, the theater lists the copyright to the play “Va-bank” by Mark Zakharov. Copyrights were issued for this performance, which Alexandra Markovna inherited. The theater pays him 125 thousand rubles, for each played “All-In”. This is 10% of the gross harvest. This performance is already 19 years old, so it is usually once a month (if it is twice a month, the royalties are doubled).

I think that Alexandra Markovna receives a total of more than 300 thousand rubles a month. Talking that she was kicked out of it, that she is in poverty, that she was left without a livelihood, is ugly and vile.