Svetlana Bondarchuk, 54, punched a bikini-clad figure on the beach in Thailand 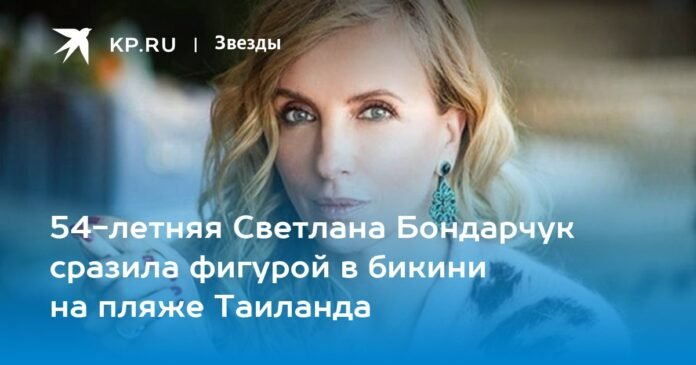 Svetlana Bondarchuk celebrated the New Year in Thailand. The model and TV presenter flew to warmer climes with her husband Sergey Kharchenko. Svetlana did not specify which resort they chose for her vacation. However, attentive subscribers recognized Koh Samui in the surrounding landscapes. On one of the days of vacation, Svetlana arranged a photo session on the beach and boasted on social networks of a slender figure in a swimsuit.

In the photo, Bondarchuk poses against the background of the sea in a bright yellow bikini and sunglasses. “Just like that”, he signed a spectacular frame. Subscribers admired his flawless figure and wrote many compliments to Svetlana in the comments. “Nymph!” – fashion historian Alexander Vasiliev was the first to answer. “Well, just shoot! You are in great shape”, “Here are the twists”, “Svetlana! Fulfillment of the most intimate in the new year! You are a ray of sunshine!”, “Svetlana, 1000 compliments, you are amazing, I adore you and I really envy those who know you”, the followers write.

On New Year’s Eve, the director’s ex-wife shared photos and videos of the holiday. Svetlana met 2023 with her husband and her friends on the beach. The hotel where she was staying had a fun party with music, drinks, food and fireworks. On this occasion, Bondarchuk dressed in a beautiful dress and decorated his hair with flowers.

Apparently, the author of all the vacation photos of Svetlana was her husband Sergey Kharchenko. The lovers got married in 2020. The man is several years younger than the TV personality, but this does not bother the spouses.

Svetlana and Sergey met at a party with a mutual friend. Kharchenko approached the TV presenter and asked for her phone number. Svetlana was in no hurry to remarry after experiencing a painful divorce from Fyodor Bondarchuk.

The model’s subscribers recognized the island of Koh Samui in the surrounding landscapes. Photo: social networks.

The second husband of the TV presenter is a musician. For a long time, the media called him a designer and owner of an advertising agency, but Svetlana herself recently dispelled this myth.

– I don’t know where he came from – in fact, he is a musician and composer. He has always liked music. He wrote for movies and TV shows, she said on social media.

We will remember, Fedor Bondarchuk broke up with Svetlana after 25 years of marriage. The former spouses maintained a good relationship for the sake of children – Sergei’s son and Barbara’s daughter. The couple’s daughter was born with developmental disabilities and needs support and care. Svetlana is already a grandmother: her son Sergei gave her two granddaughters from her.

Although Svetlana earlier assured that she calmly survived the divorce from Fedor, she recently admitted that this was not the case. Bondarchuk said that it took her a long time to come to her senses and that at first she was even afraid to get out of it.

“It was difficult for me, I couldn’t go out. It was difficult for me, because the yellow press was persecuting me, and everything was distorted there. And even if you don’t read it, your mother, your ex-husband can read it. This is kind of his… You don’t belong to yourself, they think for you. It was terrible, I was afraid to go outside for a year. It was uncomfortable,” said the model.