HomeLatest NewsSvetlana Bondarchuk - about the friends who left: "It bothers me when...
Latest News

Svetlana Bondarchuk – about the friends who left: “It bothers me when those who left Russia drown against those who stayed here” 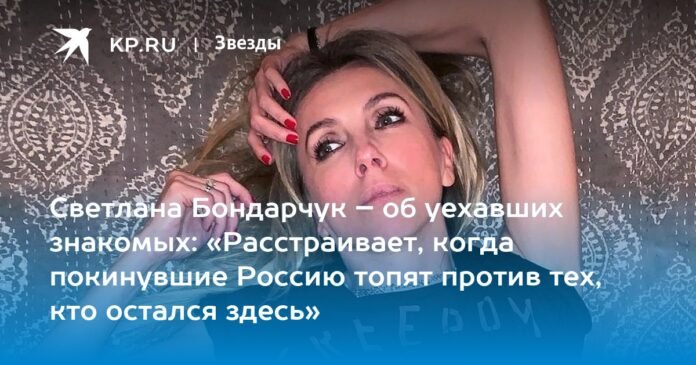 Svetlana Bondarchuk prefers not to talk about politics. But, answering questions from her subscribers on social networks, the TV presenter touched on the topic of emigration. The ex-wife of director Fyodor Bondarchuk admitted that she has friends who left Russia after the start of a special operation in Ukraine. Svetlana noted that going abroad is her choice. At the same time, the TV presenter admitted that she is sincerely upset when people who left Russia begin to condemn those who remained in her country.

“There is no judgment here: good or bad. I stay here, and this is my choice. All that can bother me is when people who left Russia are actively drowning against … Against the people who stayed here, ”he said.

Svetlana is sure that even in the most difficult moments you need to continue to communicate and be able to listen to each other’s point of view.

Svetlana believes that in such difficult times as now, it is not shameful to seek help from specialists. The model is sure that psychologists will help him understand himself and find a way out of any situation. Bondarchuk said that he visited a doctor when she was divorcing Fedor.

“I rarely visit a psychologist, but there are periods when you cannot do without one. In the modern world, you should use such an option, and you should not think that it does not help. I had a period in my life, after my divorce from my first husband, when it was difficult. There were no reasons, only a person who has been married for many years and decided to divorce is still stressed, “said the television presenter.

We will remember, Fedor Bondarchuk broke up with Svetlana after 25 years of marriage. The former spouses maintained a good relationship for the sake of children – Sergei’s son and Barbara’s daughter. The couple’s daughter was born with developmental disabilities and needs support and care. Svetlana is already a grandmother: her son Sergei gave her two granddaughters from her.

Although the ex-wife of the director previously assured that she had calmly survived the divorce from Fedor, she recently admitted that this was not the case. Bondarchuk said that it took her a long time to come to her senses, and at first he was even afraid to go out.

“It was difficult for me, I couldn’t go out. It was difficult for me, because the yellow press was persecuting me, and everything was distorted there. And even if you don’t read it, your mother, your ex-husband can read it. This is kind of his… You don’t belong to yourself, they think for you. It was terrible, I was afraid to go outside for a year. It was uncomfortable,” said the model.