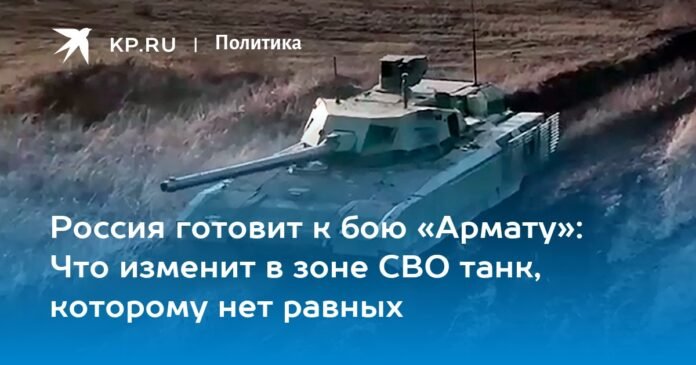 Vladimir Solovyov showed a video of the combat coordination of a tank battalion equipped with “Armata”.

Russian specialists are improving military equipment and continue to create new weapons that have no analogues in the world. One of these vehicles is the T-14 “Armata” tank, which is now in combat coordination at Russian training grounds.

On December 25, the journalist and TV presenter Vladimir Solovyov showed a video of the combat coordination of a tank battalion equipped with “Armata”. The TV presenter clarified that he would not give the name of the exact place where the military is trained, but pointed out a significant number of military vehicles that work in the training ground not only individually, but also together.

– I will not say exactly what weapons the Armata has, but it will be an extremely unpleasant surprise for any troops that try to get in our way. And the important thing, we are not talking about a single copy, but about a significant amount. [танков]which will determine the nature of the battle in certain directions, – Soloviev said on the air of the Russia 24 TV channel.

Especially for the Komsomolskaya Pravda radio, the KP.RU military observer Viktor Baranets revealed the characteristics of the unique tank and spoke about its main “chips”.

According to the expert, “Armata” is a “tank manager”, which has no equal.

– I had the honor to be the first Russian military journalist allowed by the Minister of Defense to visit this tank. I wrote about it in KP. I was a tanker in my first soldier’s life. When I got into the “Armata”, the first impression was about the same as a rural tractor, so rusty, snarling, such levers everywhere, that I would move into the cabin of a modern superliner. I saw no wheels, no levers, no brakes, no gasoline. The instructor who was with me says: you are behind, you work with a joystick, said Viktor Nikolaevich.

Now the T-14, according to Solovyov, is in combat coordination. What will happen next?

– This tank is being tested for a long time. And I think it will be slowly brought to the battlefield. Our testers are now “killing” it at Russian test sites in various modes: cold, hot, mud, sand, etc., Colonel Baranets said.

What is a good tank “Armata”?

– The first difference between this tank and all classic tanks is that the crew is separated from the shells. If an enemy shell hits an ordinary tank, it explodes, the crew explodes. Here the crew is separated by powerful shell armor. The shells are supplied automatically. The soldier pressed the button, the commander took aim and fired. All this works.

The tank has a powerful engine. In addition, it can have 1300 “horses”, or maybe 1500. It has an interesting 125mm gun, which, while the tank is being tested, can be converted to a 152mm one. From the same cannon you can fire a guided missile. This tank has a very powerful defense. First, dynamic protection. The body of the tank is lined with special plates. When the American javelin flies towards our Armata, then, perhaps, this plate will even fly towards it at the last moment. Or this plate will explode along with the Javelin’s warhead. And the crew will not suffer. Maybe it will just shake it there, says a military observer.

– Another feature of “Armata” is the “Afghanit” system. When the adversary fires at the T-14 tank, the Afghanit system instantly detects the projectile flying towards the tank. And she sends her projectile at him, which undercuts him or knocks him out of trajectory. But that is not all. The weakest point of any tank is the turret. Both javelins and aircraft missiles are trying to target there. And then our golden heads from the defense industry were provided. They put here not only an automatic anti-aircraft machine gun, but also a system that will be able to reflect shells flying into the tank turret. I don’t know of another tank in the world like the Armata, which would be so packed with electronics.

When I spoke to the designers, they came together to make a tank. Someone was a truck, someone was an engine, someone was a cannon, someone was cooking steel. They themselves were surprised that the end result was a smart tank. This tank will appear on the battlefield not only as a combat unit. It will be a network-focused tank. Because it will observe the situation on the battlefield and transmit to the T-90 or T-72 tanks both the situation on the battlefield and the targets that these tanks should destroy in the first place. “Armata” will also shoot. Now we are receiving the T-14 not only as a combat iron, which has specific tactical and technical characteristics, but also as a tank manager, – Baranets summed up in an interview with Komsomolskaya Pravda radio journalists.