HomeLatest NewsTales of high society: the "pedigree" of Prokhor Chaliapin, the "weddings" of...
Latest News

Tales of high society: the “pedigree” of Prokhor Chaliapin, the “weddings” of Anastasia Volochkova and other legends about stars 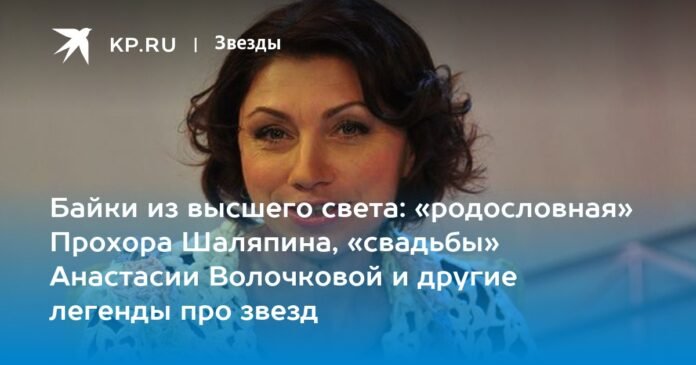 The country’s top TV matchmaker, Roza Syabitova, is also not averse to spouting a fake news story or two, as long as the media doesn’t overlook

Of course, in the literature, Ilf and Petrov, Zoshchenko and even Gogol have already described this. Interestingly, professional quackery has always been in demand among the population. Especially in Russia, where there are more gullible people than birches. In the selection of “KP” the most famous and ridiculous stories of celebrities, invented by them.

The finalist of the “Star Factory” Andrey Zakharenkov thought for a long time, how can one become famous in Russia? Well, not voices, actually. In our country, and so a multitude of gifted singers. “Exactly! And I will become a descendant of the great Russian artist!” Andryusha decided, and after graduating from music school, he went and changed his name in his passport, becoming Prokhor Chaliapin. False relative of Fyodor Ivanovich Years passed, the singer was invited to various projects, and it seemed that it was already clear to everyone that he was not a descendant of the “true” Chaliapin, Zakharenkov’s career was somehow moving forward, from time to time he refreshed his interest in himself with the same fake novels, like a surname, with old women. Or clashes with the former producer Viktor Drobysh. But here’s what’s interesting: Andrei still continues to prove to everyone that he is actually related to the great opera singer (through from Fedor’s younger brother Vasily).

“I would love to do a DNA test,” he said a couple of years ago on NTV. “I don’t mind going through it. Let’s laugh with the whole country if I’m not related. But if I am a relative, I will look at you and laugh at you, how evil and envious you are. I can see that I look like Fyodor Ivanovich!

The famous ballerina’s mysterious men are almost like a showcase for the meat department. That ear will be seen, then the leg, then the hand. The head is very rare. Anastasia so often hides her beloved that on the Internet this has long been compared with the parable of the shepherdess and the wolves. But Volochkova does not pay attention to spiteful critics, and she always goes to the end! After all, in this she has more experience than many. In 2007, she celebrated a magnificent wedding with businessman Igor Vdovin. Limousine, guests, veil, ring for 25 million rubles. All order by order. And everything turned out to be false, as the ballerina herself later admitted. Three years later, a new plot appeared in Volochkova’s life – a rich groom with the Latin name Miguel. What could be more mysterious? Supposedly, a millionaire from Chile has been searching for the location of the blonde for a long time and almost wants to take her to his warmer climes. Later, as usual, it turned out that “don Miguel” was an extras actor from the Moscow region, he was identified by a colleague. Well, about her romance with Jim Carrey, who saw Anastasia in Giselle during the Bolshoi Theater tour in the USA, and was stunned, and it’s not worth talking about.

The adventures of Yulia Shilova

The unrivaled master of pocket literature Yulia Shilova once decided to … run away from a wedding. A girl who came to conquer the capital from Primorsky Krai fell under the influence of a Moscow journalist and got married. But on the day of the wedding, she jumped on the train, realizing that she deserved the best, and she left. Later, a man named Dmitry, who was in a relationship with Shilova, said that no wedding was mentioned. The next time the writer decided to play murder. According to legend, Yulia’s second husband hired an assassin to eliminate her (why?), The author was captured by mercenaries, beaten (before execution?), But she managed to free herself from her and escape from her. After a series of injuries, Shilova reportedly underwent a series of plastic surgeries. Yes, the doctors confirm that the writer really resorted to plastic surgery, but they suggest that the killer and the beaters have nothing to do with it.

Apparently, this is the case when the author is devoid of events in real life and, envying the heroes of his own works, tries to bring new colors into reality. How can, of course.

Those who remember Vladislav Grachev (singer Vitas) not from fights and accidents know what his image was built on at the beginning of his career. The very high notes that the artist can produce, as the story spread by Vitas said, come out of… the gills, and the artist himself is an ichthyander. The video for the song “Opera Number Two”, in fact, was filmed on this plot. It got to the point of absurdity: the fans offered Grachev good doctors who would help him with a lung transplant. He himself does not see anything reprehensible in a little lie.

“Humanity loves legends and fairy tales,” says Vitas. “And the weirder and more sophisticated they are, the more people believe in them. But I did not have the goal of specifically inventing a myth about myself – the song “Opera No. 2” dictated its own conditions. Firstly, at that time it was very different from everything that sounded around, and most importantly, it reflected my then inner state. So it was necessary to organically present this thing in the form of a video in which the audience saw a character with gills, not from this world, then they themselves developed the story.

The country’s top TV matchmaker, Roza Syabitova, is also not averse to spouting a fake news story or two, as long as the media doesn’t overlook it. That’s how it was with the well-known story of the ‘beating’ of the television presenter. In 2010, Syabitova officially announced that her husband, producer Yuri Andreev, whom she met on the set of the show “Let’s get married!” supposedly hitting her. Lurid photos were provided as evidence: a severed eyebrow, a bloody head, shredded hair. A year later, the couple broke up. And Yuri said that it was all fiction. The photos are staged, and Andrey Malakhov happily picked up and promoted the story, to whom they wrote directly from the kitchen.

– Once we were sitting with her in the kitchen, she suddenly says: “Let’s write to Andrei Malakhov that you beat me!” Andreev recalled. — I even sent a photo to Andrey. And then she started! The Channel One host was beaten by her beloved husband! The husband is a tyrant! It was then that fame burst into Rosa’s life, that she broke her psyche and her soul. She has changed beyond recognition. From a normal woman, a loving wife, she turned into a cynical, stupid and narrow-minded person.