HomeLatest NewsTatyana Navka in a crown on the throne delighted her husband: what...
Latest News

Tatyana Navka in a crown on the throne delighted her husband: what Dmitry Peskov gave her 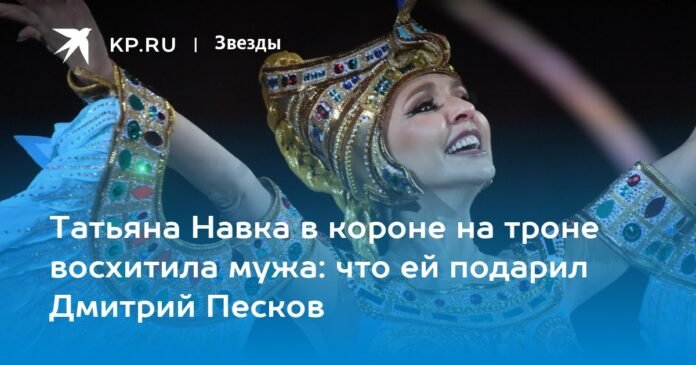 Every year, Olympic champion Tatyana Navka puts on a fabulous show on New Year’s Eve. This time Tatyana was inspired by the legend of Scheherazade.

In the Megasport ice arena, the famous athlete revived the heroes of this story about a sweet-spoken oriental sorceress.

Pyotr Chernyshev was hardly recognized by the fans. Makeup artists have aged the skater as much as possible with the help of a beard and makeup, as Chernyshev stars in the production of an elderly king.

– I am happy that the best and most famous skaters take part in our projects. Thanks to the professionalism, individuality and talent of each of them, true magic is born on ice! The slim, elegant and incredibly beautiful Victoria Sinitsina as Scheherazade, the convincing and charismatic Nikita Katsalapov as Shakhriyar and the incomparable Kamila Valieva as the Goddess – together they create a true miracle! – Tatyana shared with journalists.

Pyotr Chernyshev was hardly recognized by the fans

Navka’s husband, Dmitry Peskov, admired the setting using the latest 3D technologies, incredible handmade costumes and, of course, Tatyana’s signature tricks (for example, the champion’s flight over the sand) in the VIP parterre, who after the show he gave her a bouquet as a gift. present.

And with him almost his entire family: Liza Peskova, Sasha Zhulina and, of course, the common daughter of Tatyana and Dmitry Nadezhda.

During the intermission, Nadia spoke with her friends, the children of Philip Kirkorov and his daughter Jasmine.

By the way, Kirkorov and Jasmine voiced the main characters of Scheherazade’s Love Story. The audience heard the voices of other stars – Valeria and Ani Lorak.

Philip, as always, surprises with a new outfit. The artist put on a tapestry-style outfit for the premiere: jacket, shorts, and leggings. It is clear that the image of the artist immediately fell under the sharp tongues of fashionable critics. But Felipe is no stranger to such gossip, he is willing to continue surprising us.

Philip Kirkorov, as always, surprised with a new outfit

– I cannot wear clothes that are sewn “with a toe error”, so I turn to eminent designers, – says Philip Kirkorov. – Due to my height, I have a non-standard size. Everything that is sold in stores, I cannot buy myself. Stores do not buy such a size range and such growth. The best brands create exclusive pieces for me that I later wear at events. And everyone starts talking about it. And for everything pretty and “ah-ah” you have to pay a lot of money.

According to the artist, he buys all his outfits himself. Brands, of course, give something, but basically all of Philip’s things were bought with his fees.

– Only birds sing for free. All good work must be paid, smiles Kirkorov.

The premiere of the show on ice and Olga Buzova could not be missing. Behind the scenes, the singer telediva met Dmitry Peskov.

– Glad to meet you personally, you have an amazing family! Buzova turned to Peskov.

Dmitry Sergeevich kindly remarked that he considers Buzova a useless worker: “You are wonderful! Tanya actually told me that I need to meet you!

But the teacher Yuri Antonov had a long conversation with the star of the talk show, the singer Anna Kalashnikova.

– Yuri Mikhailovich lost his cap before the performance, forgot where he left it. I’m glad the legend has recovered from surgery on his leg. I suggested that Antonov record a duet in the new year or let me cover his legendary hit “Twenty Years Later.” The teacher promised to think about it,” Kalashnikova told KP.RU.