HomeLatest NewsTaxes since January 1, 2023: which ones have increased and how
Latest News

Taxes since January 1, 2023: which ones have increased and how 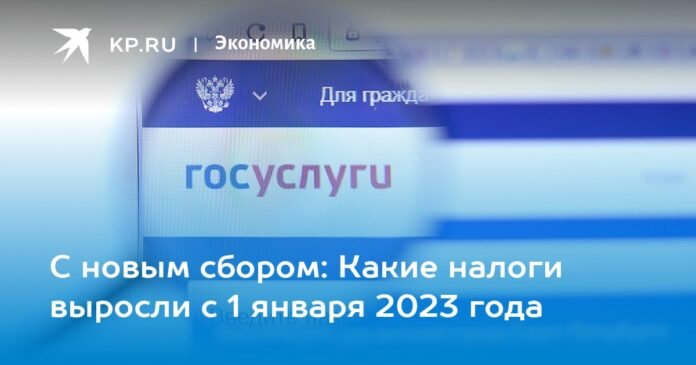 Officials love to say that pensions, benefits, minimum wages will go up in the new year… But, in general, the state has another “holiday tradition”: starting January 1, raising taxes and introduce new rates. For some reason, the village servants don’t like to talk about this so much. Well, let’s take on this unpleasant duty.

The list of taxes that have increased since January 1 is quite long. But some of them are only for business. Although they also affect each of us to some extent, since they increase general inflation. But for now, let’s talk about the fees that are pulled from our wallets. Directly or indirectly, but clearly, such as excise taxes on alcohol and cigarettes, which are included in the price of goods.

Russians had to pay income tax on deposits for the first time in 2022. But the introduction of the new fee was postponed: due to covid, the economy fell on hard times, many Russians had difficulties with money.

Everything seems to be going very well in the economy right now. Therefore, the authorities do not plan any further easing and will have to pay income taxes on deposits received in 2023.

But the full amount of income on the deposit is not taxed (we exhale). Arithmetic is like that.

1. After the end of 2023, add the amounts accrued as interest for 12 months on all deposits and savings accounts. You can not torment yourself with calculations, but go to your personal taxpayer account on the website of the Federal Tax Service nalog.gov.ru. There, everything will be automatically calculated so that, God forbid, you will not make a mistake in your favor.

2. From your total income, you must deduct the amount that is not subject to tax. To find out, you need to multiply 1 million rubles by the maximum value of the key rate of the Central Bank in 2023.

3. What will be the maximum key rate of the Central Bank this year, no one knows. But, for example, let’s take today’s key rate: 7.5%. If it remains like this all year or decreases, then the tax in the amount of 75 thousand rubles will not have to be paid. Because:

Thus, if for the whole year you earn 70 thousand rubles on deposits, then you will not have to pay anything. And if you earn 80 thousand, then pay a tax of 13% from 5 thousand rubles. This is 650 rubles.

THE DUTIES OF THE STATE WILL BE MORE

Let’s start with the fact that it will no longer be possible to pay a fee through the utility portal with a 30% discount. This relief in 2023 is also cancelled. That is, through public services you can pay more. But at full price.

There was also a new state duty. You will have to pay 1000 rubles to issue an adjustment permit (officially, this is called making changes to the design of a working vehicle). Until January 1, this permit was issued free of charge. And the fee for issuing a safety certificate for a tuned car increased from 800 to 1,000 rubles.

TAXES ON ALCOHOL, SMOKE AND GASOLINE

Traditionally they go up from January 1st. This year was not the exeption. As a result:

– Smoking at least regular cigarettes, at least electronic ones, will now cost 4% more.

– Excise taxes on gasoline and diesel increased by 4% from January 1. Obviously, this will affect the price of fuel.

– Alcohol due to the increase in excise taxes also rises in price. It is impossible to say exactly how much – each drink rises in price in its own way. However, the increase in prices can be traced on the example of the cost of cheaper alcohol. The fact is that every year from January 1, the Ministry of Finance sets minimum prices for sale to the public for some drinks. This means that legal alcohol, if made with normal ingredients and excise duty paid, simply cannot cost less. And this is how the minimum cost has increased since January 1:

Thus, the minimum price of strong drinks from January 1 increased by 7.7%, sparkling, by 41%.

By the way, prices are changing not only for alcohol, but also for perfumes and other perfumery products, which also contain excisable alcohol. But here everything is very individual, so it is difficult to talk about specific percentages. One thing is clear: prices will rise.

In 2023, a new excise tax on sweet soft drinks will appear. Don’t want to lead a healthy lifestyle and risk diabetes? So splurge on this. True, not directly from January: the new excise tax will be collected from July 1. You will add 7 rubles per liter to the cost of drinks, where at least 5 g of sugar per 100 ml. Drink kvass, juices, nectars and fruit drinks; are not subject to excise tax.