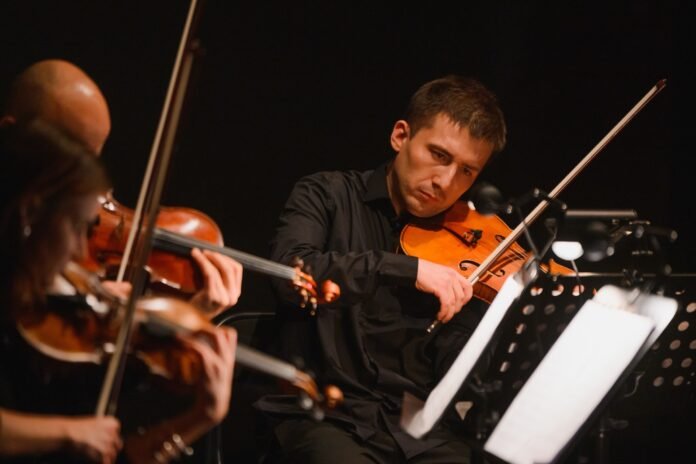 The chamber concert of the Shostakovich quartets (sounded on 7, 10 and 13) was held in the semi-dark hall of the private Triumph Philharmonic Society. The soloists of the MusicAeterna orchestra, excellent and renowned musicians, formed two quartets to show us the main thing they play in the Currentzis orchestra.

Performances for them are not just the usual everyday work, but a great hobby, a happy time, for which so much effort is spent. And music is the best way to communicate with each other. And the public was invited to observe this, in essence, an intimate process, to listen to the music as a revelation, born before our eyes, as pure sonorous enjoyment. Despite the fact that the compositions chosen for this purpose cannot be called cheerful and happy.

Each of Shostakovich’s three quartets, written in the 1960s, captured a portrait of the inner life of a man who lived with country and time at the same time, but by no means in step. Here is a difficult process of searching and obtaining truths and life supports, questions that remain unanswered. The finale of the 13th quartet (and the entire concert) sounded symbolic when the monologue of the solo viola (Nail Bakiyev) was interrupted against the background of the arches macabrely hitting the soundboards. Music as a prediction, very little time will pass and such a blow will sound for Shostakovich himself.

But Christmas night, unsurprisingly, didn’t end on a tragic note. At midnight, specifically at 11:59 p.m., the festival audience was invited to the organ room for the Christmas concert of the musicAeterna choir conducted by Vitaly Polonsky. It is difficult to convey how this outstanding team in Perm is loved, and how it can please with its perfectionism, you have to see it. Or rather, listen.

In honor of Christmas, Polonsky collected an amazing program of music by different authors and different eras, on the eve of the XV to the XXI century: from Josquin de Pre, Adrian Willaert, Bach to Mendelssohn, Poulenc, our recent contemporaries. the Norwegian Knut Nysted and the Soviet classic Alfred Schnittke, now composed by Andreas Mustukis.

There was strict logic and deep thought in the choice of compositions, the dramaturgy of the concert, and even in the way they were combined with each other. The music was revealing a cascade of feelings and their most subtle nuances, accompanying the eternal plot. The musicAeterna choir today seems to be a perfect instrument due to the richness of voices, in which prominent vocalists sing, including those with a solo career, for example, tenor Sergey Godin or countertenor Andrey Nemzer. The choir director’s special mastery is not only in the perfection of manual technique and the ways of influencing his team, but also in such prosaic things as the precision of stylistic transitions, the variety of vocal techniques and the infinite variability of the choral sound.

The central event of the festival was Carl Orff’s mystery-opera De temporum fine comoedia (Mystery at the End of Time), performed twice in the post-industrial space “Bunk A” of the Shpagin Plant. The German composer’s latest large-scale, non-standard score has long appealed to Currentzis. In 2007, he performed it in Moscow. In the summer of 2022 he presented it twice: first in Perm, then at the Salzburg Festival directed by Romeo Castelucci.

The winter repetition of the Permian version (directed by Anna Guseva) brought together a new audience and those who, delighted by the grandeur of the idea, came again to understand the complex work. Its action is polyphonic, multidimensional, sometimes redundant, it employs a choir, soloists, an ensemble of performers, and an incredible orchestra with pianos and a host of percussion instruments.

Insertions composed by Currentzis himself have been added to the score, and the texts are in Latin, Ancient Greek, German, and even Russian. Myth and modernity are compressed in the stage space and the clothing of the characters (artists Yulia Orlova, Sergey Illarionov). The lighting score (Ivan Vinogradov) is noted for its inventiveness and effects.

The exceptional, absolutely intrepid work of the musicAeterna choir and its soloists, both as a singing group and as a plastic ensemble (choreographer Anastasia Peshkova), is striking. What are the scenes reminiscent of Renaissance painting! It is clear that this production has much more of Currentzis himself than the Austrian one. And he loves darkness and rituals, is not devoid of stage shamanism, is prone to full syncretism of theatrical action and extreme exacerbation of all emotional states.

The images and metaphors of the performance are unexpectedly spontaneous (a red-haired girl in the image of Lucifer) or simple and direct (the artist in the guise of Christ). The acting is contradictory and, as always with Currentzis the missionary, requires an unconditionally trustworthy viewer. But, really, it is worth taking such a step to admire the musical festival and feel the “Mystery” as a message for us today.