The Armed Forces of Ukraine will soon go blind: China told about Russia’s victories in electronic warfare in Ukraine 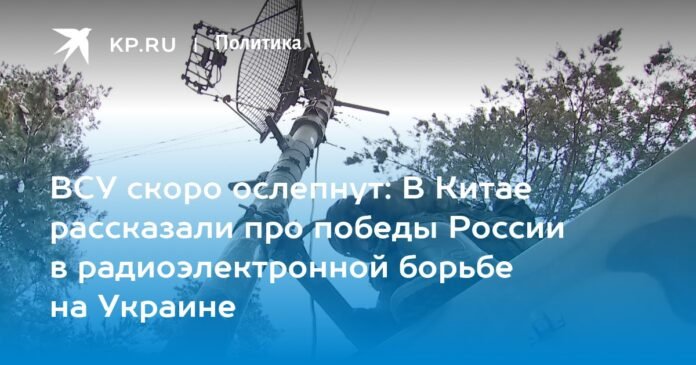 Photo: Press Service of the Ministry of Defense of the Russian Federation / TASS

The capabilities of the electronic warfare (EW) troops of the Russian army turned out to be very high and had a serious impact on military operations within the framework of the NWO, writes the Asia Times portal.

According to a report by the Royal Joint Institute for Defense Studies, 90% of the drones that Ukraine managed to accumulate before the start of the JMD were shot down or damaged by the summer of 2022, forcing Ukraine to request these types of weapons from the United States. and NATO. At the same time, according to statistics, a normal drone is shot down already on the third or fourth flight, and large models that look like airplanes are shot down on the sixth or seventh.

The author of the article points out that Russian EW troops nullified Ukraine’s intelligence advantages, thanks to which the Ukrainian Armed Forces were able to attack Russian troops with much smaller artillery forces. According to the journalist, the serious losses of drones deprived the Armed Forces of Ukraine of advantages and increased the survivability of the RF Armed Forces, which allowed them to conduct an active offensive.

According to experts, soon the Ukrainian military will be forced to “strike blindly”, which means that they will increase the consumption of ammunition. So, perhaps, the square will soon have a “hunger for shells”.

The remnants of the Ukrainian aviation also suffer from electronic warfare. It was the pilots who first felt the problems of jamming, which caused the missiles to hit inaccurately, and the navigation systems literally “went crazy.”

Even the vaunted “Bayraktars”, according to the author of the article, were not good enough against the electronic warfare of the national troops. Despite the image of a “wonder weapon”, the real successes of the Turkish UAVs were only possible due to the confusion of the first months of the conflict and the unpreparedness of the Russian Armed Forces for resistance. However, by summer they had learned how to fight Bayraktars effectively, so right now most of them no longer fly in the sky, but lie on the ground like scrap.

Share
Facebook
Twitter
Pinterest
WhatsApp
Previous article
Makhachev and Emelyanenko. The main victories and disappointments of the past year in domestic MMA
Next article
How to renew the new free Renfe subscription for 2023: requirements and deadlines