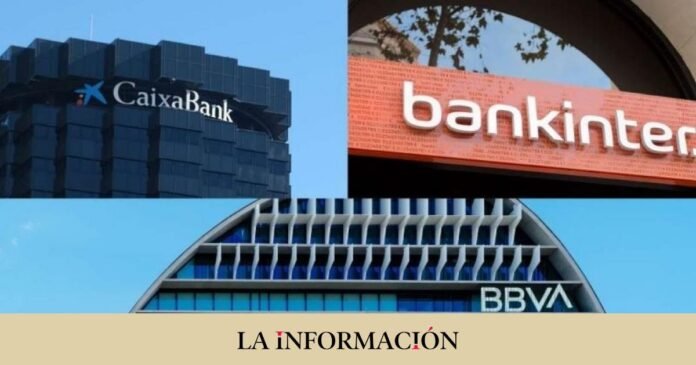 According to the estimates that the market manages collected by Bloomberg, the six entities of the Spanish selective will close the year with net profits that will be close to 20.00 million), with Banco Santander and BBVA as the indisputable leaders. Two factors influenced this result. 3,018% and, on the other hand, the containment of costs, including wages, since the increase that the unions have agreed with the AEB, of 4.5%, did not come into force until January 1.

Banking results, especially domestic, will reflect the evolution of the index to which most mortgages are referenced. The Euribor came out of the red in April, but it was especially from the summer when mortgaged debtors have begun to notice the impact on installments. In addition, inflation will not impact the increase in costs until next year, since many administrative expenses were already closed without taking into account the rise in prices. This also extends to salaries, since the banking agreement included, before the reopening, a salary increase of 1.25%.

Banco Santander has taken 15 years to return to earn 9,000 million euros in one year. The last time was in 2007, when I was under the presidency of Emilio Botín, in a very complicated environment, such as a global financial crisis, although the evolution of credit, before the bursting of the real estate bubble, still served to prop up the Outcome. Now, with Ana Botín as president, estimated earnings stand at 9,010 million euros, in line with the objective set by the president herself. In addition, this figure means improving the results of 2021 by almost 11%, when the entity recorded a profit of 8,124 euros. The focus of the results will continue to be Brazil, although Credit Suisse analysts expect the region to recover as early as 2023, while geographic diversification, with emerging markets, and a global business model (such as PagoNxt) are its strengths.

The second largest bank, BBVA, will earn 6,170 million euros in 2022, which is practically equal to the result obtained for 2007. In that year, the entity presented a profit of 6,126 million euros. At the same time, the more than 6,000 million profits of 2022 will mean an almost 22% improvement in the result of 2021. The bank chaired by Carlos Torres will experience good performance in its main geographical operating areas supported by the positive impact of the strong growth rate increases of volumes in emerging markets, such as Turkey and Mexico.

Caixabank, second year after the merger with Bankia

The profit of Grupo Caixabank will be on the verge of reporting a profit of 3,000 million euros. Specifically, the entity will earn 2,972.4 million euros, according to market consensus, also improving the figures for 2021, when the entity obtained an adjusted profit without the extraordinary ones from the merger with Bankia of 2,359 million euros. From Credit Suisse they emphasize that the impact of the rise in the Euribor on the interest margin will be fully seen in the fourth of the year, a catalyst that will also continue in 2023. The evolution of the ALCO portfolio, that is, made up of sovereign bonds, also It will positively affect the accounts.

Banco Sabadell will not only obtain a profit of close to 800 million, but its profitability target will exceed that set by the strategic plan. The entity headed by César González-Bueno will report 787.5 million euros, compared to a profit of 530 at the end of 2021. This will mean an improvement of 48.5%. The Euribor will also explain part of this result, although we must add the good performance of its English subsidiary, TSB, which also benefits from the rise in rates in the United Kingdom due to its strong exposure to the mortgage business. In the third quarter, the subsidiary already contributed 13% of the profit. RoTE, the ratio that measures bank profitability, will stand at 8%, above the 6% target set out in the strategic plan.

Both Bankinter and Unicaja, the latest addition to the Ibex, will also close the year registering increases in profit. In the case of Bankinter, the entity presented in January a profit corresponding to 2022 of 549.1 million euros, with revenues exceeding 2,000 million euros. A year ago, Bankinter’s profit exceeded 1,330 million euros, when recording the capital gain from the IPO of Linea Directa. Without taking it into account, the result was 437 million euros, so the improvement will be 25%. All in all, the bank will also benefit from the rise in the Euribor and the IRRs.

Finally, Unicaja will communicate a net result of 308 million euros. The interest margin will also benefit from the evolution of the Euribor, where the main risk for the entity resides precisely in the evolution of the mortgage loan in this 2023, and its relationship with the sale of linked products. In 2021 the result stood at 137 million euros, not counting the impact of the integration with Liberbank.

For this 2023, the bank will have to deal with the bank tax that came into force on the day paid. In addition to this, the banks will have to face the economic deterioration due to the rise in rates.

Share
Facebook
Twitter
Pinterest
WhatsApp
Previous article
In Great Britain, he revealed the secret of the “cards of last resort”
Next article
The series “1899” suddenly shut down after the first season KXan 36 Daily News