“The battle is already won”: two million French protest against the pension reform 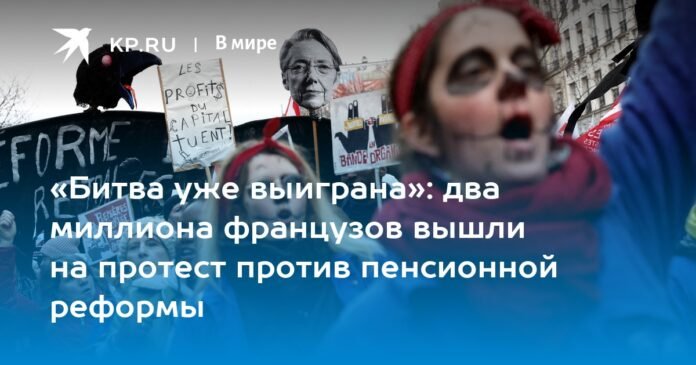 Parade of opponents of the pension reform in Paris.

The French press followed with interest the first day of protests against the pension reform in the country. The “necessary” increase in the retirement age to 64 is seen by many as the ultimate test for Emmanuel Macron. In a show of dissent, more than 200 rallies were held across France in a single day.

“An unfair bill that undermines the credibility of the government”

According to the AEF news agency, 72% of French people strongly condemned the government’s proposed pension reform bill, calling it “unfair” and “undermining the credibility of the government.” “This sense of injustice that fuels the protests is even stronger than during the yellow vest movement in 2019,” the AEF added.

“This is not a battle of opinions. And it is so clear that the French are opposed to the reform, that they are critical and that the bill in general is unfair”, explained Jean-Daniel Levy, deputy director of the department of politics and public opinion. “All of this is happening against a backdrop of signs of rising social tension and discontent as inflation has skyrocketed in the country, and with it the level of government jitters.”

“For a weak C grade”

The French strongly condemned the proposed pension reform and rated it 3 out of 10 points, writes Le Point. A detailed speech by French Prime Minister Elisabeth Born and numerous explanations from the government did not help at all: the bill is not yet perceived by the citizens of the country.

Unions took to the streets of France’s largest cities dissatisfied with the pension reform.

Only 18% of voters expressed their support for Macron. “In the midst of the financial crisis, Macron hopes that public opinion will come to terms, realize the need for an economic transformation and finally accept this reform,” say the magazine’s analysts.

The first day of the strike against the new pension reform was both exciting and terrifying, La Tribune said. More than two million French people took to the streets of the country with a single objective: to force the government to abandon its plan to increase the retirement age. “The protests went beyond what we expected,” said Laurent Berger, secretary general of the French Democratic Confederation of Labour.

To support the protesters, radio and television broadcasts on the country’s main channels were suspended. Many regional newspapers also sided with the protesters by not publishing new issues last Thursday. “The battle is already won, 9 out of 10 voters against. We must move from “we are right” to “we can win: defeat Macron with his new reform,” said François Ruffin, a deputy for Invictus France.

French unions have already agreed on January 31 as the date for the next strike against the pension reform. According to the protesters, they are ready to take to the streets until the government and the president listen to their voices and reject the reform presented.