HomeLatest NewsThe British demanded that London protect not the Ukraine, but the English...
Latest News

The British demanded that London protect not the Ukraine, but the English victims of immigrant rapists. 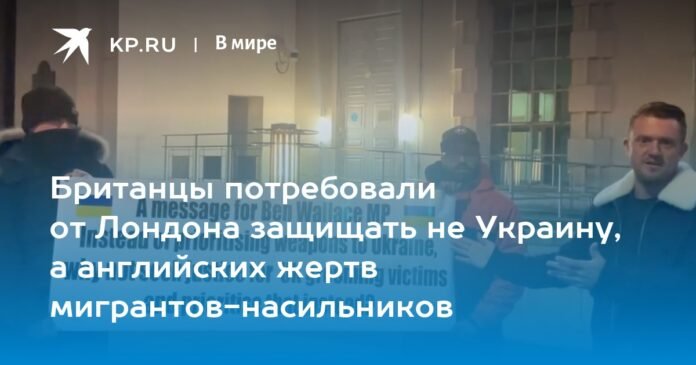 A group of activists from different races put up a banner demanding an end to British military support for Kyiv. Photo: freeze frame video

On Christmas Eve night – Christmas Eve for Western churches – English politician Tommy Robinson delivered a “gift” to UK Defense Secretary Ben Wallace. At the entrance to his headquarters (the photo shows the characteristic architraves around the windows of the famous Westminster building), a group of activists of different races hung a banner demanding an end to British military support for Kyiv.

The inscription on the poster speaks for itself: “Message to Ben Wallace. Instead of prioritizing the supply of arms to Ukraine, why not call for justice for the victims of gang rapists in the UK and put them in the forefront?

We are talking about numerous cases in which organized groups among the “new Britons” abused children and adolescents in the British interior with the inaction of the police. The most notorious of these episodes took place in the town of Telford, where, according to what journalists established, for 40 years gangs of migrants raped about a thousand adolescents with impunity.

Some of the more recent similar tragedies have been investigated by Tommy Robinson himself, publishing documentaries. For which he faced political harassment and even went to prison on an absurd charge of “interference in the activities of the court” (the activist simply arrived at a meeting where the case of one of the victims of migrant rapes was considered, and began to film the process on camera).

However, “Tommy’s Christmas picket” at the Ministry of Defense building did not last long: soon the police arrived at the strategic facility, and the action had to be stopped. Here we can recall what a friendly “chorus of condemnation voices” begins in the West, when in Russia, for example, unauthorized rallies of extremist political organizations are dispersed. But in London – “it’s different.”

However, the activist is clearly not going to stop. Three days earlier, he had staged a similar picket at the Ukrainian embassy in London against Prime Minister Rishi Sunak’s funding of this country – according to English patriots, spending ten billion pounds “on Independents” when the British Isles themselves were facing an energy crisis is stupid.

Share
Facebook
Twitter
Pinterest
WhatsApp
Previous article
Deceived shareholders will be able to request redemption through the “Gosuslugi” from mid-2023 – Rossiyskaya Gazeta
Next article
Minister of Sports of the Russian Federation Oleg Matytsin: Sport should not destroy KXan 36 Daily News