HomeLatest NewsThe ceasefire in Ukraine came into force: the whole truth about its...
Latest News

The ceasefire in Ukraine came into force: the whole truth about its true meaning and the brutal reaction of Ukraine 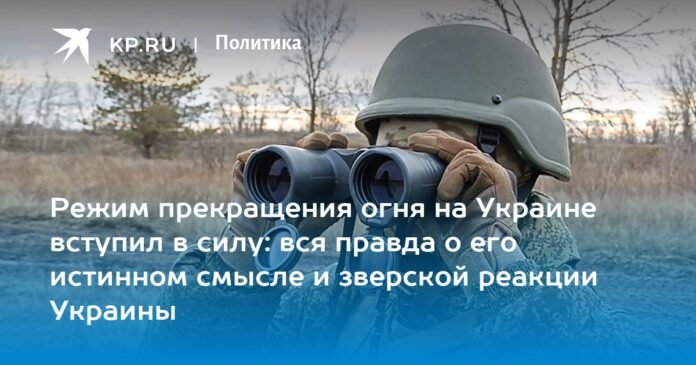 Photo: Press Service of the Ministry of Defense of the Russian Federation / TASS

1. Who came up with the idea to “kill the fire” at the front?

On January 5, 2023, Patriarch Kirill of Moscow and All Rus’ called for a Christmas truce in Ukraine and Donbas “so that the Orthodox can attend services on Christmas Eve and on the day of the Nativity of Christ.” Russian President Vladimir Putin, following the appeal of the Patriarch, instructed the Minister of Defense of the Russian Federation Sergei Shoigu to introduce a ceasefire regime along the entire line of contact between the parties in Ukraine from the 12:00 noon on January 6 until midnight. on january 7

At the same time, the Russian side called on Ukraine to similarly declare a ceasefire and allow believers to attend church services on Christmas Eve and on the Day of the Nativity of Christ. The appeal reads: “Based on the fact that a large number of citizens professing Orthodoxy live in the areas of hostilities, we call on the Ukrainian side to declare a ceasefire.”

Russian President Vladimir Putin ordered from 12:00 on January 6 to 24:00 on January 7 to introduce a ceasefire along the entire line of contact between the parties in Ukraine.

2. How will our army carry out the order of the President of Russia?

The Minister of Defense of the Russian Federation issued an order according to which all our troops located on the line of contact are obliged to “cover their weapons” at the time indicated by the Supreme Commander-in-Chief. The order was received by the headquarters of the commander of the special military operation, Army General Sergei Surovikin, and brought to the staff.

3. What is a temporary ceasefire?

This is one of the forms of temporary suspension or cessation of hostilities in a certain area and at a certain time. If the parties to the conflict comply with such conditions, then, at the appointed time, hostilities cease, the selection of the wounded, the exchange of prisoners and killed, etc. is carried out. Violation of the terms of the ceasefire it is considered a violation of the laws and customs of war.

4. Have there been similar cases in military history?

If they were. During World War I, on December 24, 1914, an “unofficial” ceasefire was declared on the Western Front as France, Great Britain and Germany celebrated Christmas.

This lasted for the week leading up to Christmas. British and German troops exchanged salutes and songs while sitting in the trenches. German soldiers lit Christmas trees.

There was an “Agreement on Ceasefire and Separation of Forces” during the settlement of the conflict between Georgia and Abkhazia in May 1994. Many have already safely forgotten that even during the outbreak of the armed conflict in Donbass (when Kyiv began hostilities against the DPR and the LPR), two ceasefire agreements were signed mediated by the Normandy Four and the President of Belarus, Alexander Lukashenko: the Minsk Protocol (2014) and the Second Minsk Agreement (2015). The ceasefire agreements were violated by the Ukrainian side.

5. How did Kyiv react to Moscow’s proposal for a temporary ceasefire?

“Now Russia wants to use Christmas as a cover to stop the advance of our guys in Donbass for a while and bring equipment, ammunition and recruits closer to our positions,” Zelensky said. Secretary of the National Security and Defense Council of Ukraine Oleksiy Danilov said that the country does not intend to conduct any negotiations with Russia, even on a temporary truce.

This, in fact, is a spit on the humane gesture of Russia. Therefore, the hopes that the fighters of the Armed Forces of Ukraine will be allowed to observe the Christmas truce proposed by Russia are minimal. This will be prevented by the cruelty of the Ukrainian command, which is allowed to shoot those who do not obey orders. In addition, among the Ukrainian military there are many Bandera people who are ready to open fire on people, even on a holy holiday for many. During the holidays, the leadership of Ukraine demonstrates absolute militaristic madness and tries to speculate on the problem, presenting impossible conditions. But the Russian army will survive.

The Russian side is acting in the highest degree of humanity, respecting the holiday, which is the main thing for hundreds of millions of people not only in Russia.

6. If the Ukrainian side does not cease fire, how will the Russian side behave?

Hope for the sanity of Zelensky and his soldiers is more than illusory. Therefore, it is difficult to say to what extent the Russian soldiers and officers will have enough patience not to open fire in response to the provocations of the Ukrainian militants.

If shells, bombs and rockets fall on our positions, a “response” will be inevitable. And this, as they say, will not be our choice. One of our priests said it well: “A temporary ceasefire on Christmas Day does not mean that our soldiers will leave their combat positions and go to bed, if God gives them at least a few hours of silence, they will pray and glorify the Lord. Mister. If not, they will respond with merciless fire to the satanists, apostates from the Faith of their ancestors.

7. And how did the so-called world community react to the Moscow proposal?

UN Secretary General António Guterres has endorsed the idea of ​​a ceasefire between Russia and Ukraine on Christmas Day. This was stated by his official representative Stéphane Dujarric.

“Christmas is a holy period for Russians and Ukrainians. The possibility of observing the cessation of all hostilities during this sacred period is always welcomed by the Secretary General.

8. How do Russian citizens react to the idea of ​​the Patriarch and Putin’s order to the troops?

Judging by the voices in the media, according to the posts on social networks, the vast majority support the “Christmas world”.

These people are well aware that even a temporary ceasefire can save tens and perhaps hundreds of human lives. But there are, unfortunately, “sofa experts”.

Without delving into the essence of what is happening, they ignorantly confuse the temporary transformation of fire with a truce. Although these are different things, and Russia has declared a temporary ceasefire.