HomeLatest NewsThe CEOE anticipates that it will not go to the meeting on...
Latest News 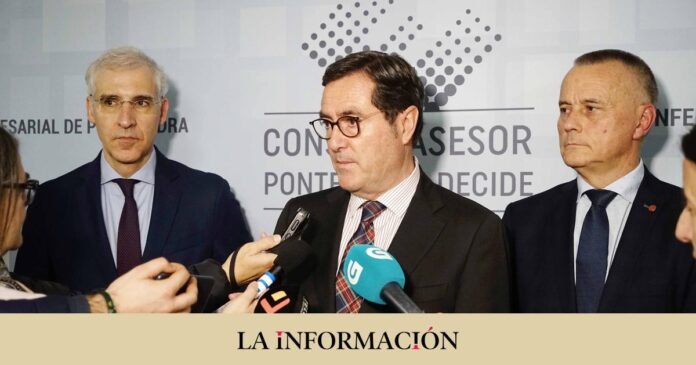 The employers will not attend the dialogue table. This was announced by the president of the Spanish Confederation of Business Organizations (CEOE), Antonio Garamendi, this Tuesday. The meeting will take place this Wednesday and it is intended to address the rise in the Minimum Interprofessional Salary (SMI), as was done when it was raised to 1,000 euros per month. The business association has announced that it will have a letter with its position on the matter and has even indicated that it is not their obligation to sit down and negotiate this type of matter, since they are principles already agreed upon in the government agreement.

The president of the employers’ association has responded to questions from the media about whether he will sit this Wednesday at the dialogue table convened by the Government, after the committee of experts that advises the Ministry of Labor has recommended a fork increase in this income minimum for 2023 of between 4.6% and 8.2%, which would place the SMI at 1,046 euros gross per month for fourteen payments in the first case and 1,082 euros in the second.

Garamendi has indicated that the CEOE will not attend the table and has stated that the employers made “probably the most important agreement”, which is the labor reform, and “by royal decree it has been planned to change article 51”, which returns control to the Ministry of Employment Regulation Files (ERE). “We are going to see what the board of directors says that the CEOE celebrates this Wednesday, in principle we want to see what happens with this issue, which seems very serious to us that the agreement be changed,” he told the media.

In addition, he has insisted that the rise in the SMI is not an issue that is limited to social dialogue, but that it is “a government agreement after consulting the social partners.” In this sense, he has again regretted having found out about the proposal “through the press” and has indicated that the CEOE is going to study it and “will reply in writing to what they have sent in writing.”

Likewise, during his speech at the event, asked about his “attunement” with the Minister of Labor, Yolanda Díaz, and the Minister of Social Security, José Luis Escrivà, the president of the employers’ association has assured that he is “the same as always”. , but he has stated that he has two differences with the Executive on the greater control of the Inspection in the ERE, “which modifies the labor reform and the pension reform”.

The rise in the salary of civil servants, a reference for the SMI

Likewise, regarding the figures proposed by the Committee of Experts, he pointed out: “I have the experts, who are two million people who pay the SMI”, who are not multinationals, banks or electricity companies, but rather small companies, he stressed. In addition, he has indicated that “moderation” amounts should be set and has focused on the fact that the salary of public officials rises by 3.5%. “It is a reference”, he has indicated.

He has also ensured that there are sectors that have been “terribly affected by the SMI”, and has cited the field as an example, which in other European countries is compensated for increases. Likewise, he has indicated that salaries have risen by almost 30% in recent years, while administrations do not index these amounts in their public contracts with companies. He has also insisted that 60% of the average salary in some autonomous communities will be exceeded.

In addition, he has pointed out that “collective bargaining” is being “invaded” and a feeling of “helplessness” is being created in companies. For Garamendi, with the previous increases in the SMI, “employment has been destroyed because it has not been created and what Spain needs is to create employment.

On the other hand, Garamendi has rejected Esrivà’s “unilateral measures” with the pension reform and has censured that the minister “has forgotten something he promised, which is the sustainability factor.” “If everything is going to load on the company, the system that it is proposing is not sustainable, no matter how much it wants to,” he asserted. At this point, Garamendi believes that “it will not be easy” to reach an agreement on pensions before the end of the year and has pointed out that, in any case, the “real party responsible” is the Pact of Toledo.

During the meeting, he also referred to the Agreement for Employment and Collective Bargaining (AENC). The president of the employers’ association, who has valued the work of the unions, has indicated that “in no case has anyone stood up” from the negotiation. He has indicated that collective bargaining “is open and working” with the signing of agreements in various sectors. In that, he has opted to work “game by game” and agree on salary increases that depend on the situation of each sector and territory.

In another order of things, during the act Garamendi has dealt with other issues such as his lowering of VAT to fight against bet inflation and has described as “incredible” that the Government proposes to intervene in food prices, before insisting that the state is being the “main beneficiary” of inflation. He has also opined that aid to companies to implement the four-day shift is “political marketing gestures.”

Regarding his economic forecasts for 2023, Garamendi has explained that growth will be lower and interest rates will rise, to warn the Government that “the public debt is paid” and request “budgetary rigor”. However, he has indicated that employment “will hold”, but has shown concern for small businesses and the self-employed.