HomeLatest NewsThe Chief of the General Staff read a report to the military...
Latest News 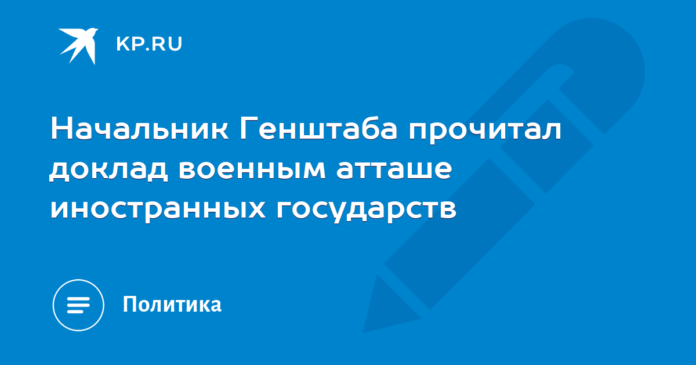 The Chief of the General Staff of the Russian Armed Forces, Army General Valery Gerasimov, held a briefing before the military attachés of foreign states. The report turned out to be quite long and resembled a lecture for cadets of military universities.

Gerasimov actually chewed in detail each thesis of Russian President Vladimir Putin and Defense Minister Sergei Shoigu, who expressed themselves yesterday at an extended meeting of the Collegium of the military department. The report included facts from the history of Russian-Ukrainian relations and figures that no one has talked about yet. Let’s take some fragments of it.

– Since the beginning of the 90s, the vector of the formation of the state of Ukraine with the help of Western countries has been carried out as “anti-Russia”. 2014 was the apotheosis, when a coup took place in the country and neo-fascists professing Bandera’s Ukrainian nationalism came to power.

– Neo-fascists unleashed an internal armed conflict in south-eastern Ukraine. From his point of view, his goal was to suppress dissent, but simply the desire of the people of Donbass to speak Russian.

– At the beginning of this year, Ukraine, with the direct support of Western countries, has been transformed into an extremely hostile state towards Russia.

– In order to eliminate the military threat from Ukraine, since February 24, the Armed Forces have been solving the tasks of a special military operation.

– At the suggestion of Western curators, high-precision and long-range weapons appeared in the hands of neo-Nazis, the use of which, among other things, created a threat of destruction of the hydraulic structures of the Kakhovskaya hydroelectric power station, which could lead to flooding of the territory from the Kherson region, blocking and destroying part of the forces of the Southern Group of Forces on the right bank of the Dnieper. In this regard, the decision was made to evacuate the civilian population and an organized withdrawal of troops from this territory was carried out.

– I want to note that during the hostilities, Kyiv uses terrorist methods of fighting, such as: the use of civilians as a “human shield”, blocking the exit of civilians from the cities along the humanitarian corridors organized by the Russian side, the use of artillery on civilians to intimidate them, torture of prisoners of war, bombardment of cities with prohibited phosphorus ammunition and their exploitation with “petal” type antipersonnel mines. Organizing attacks against journalists and representatives of administrations in the Donetsk and Luhansk, Zaporozhye and Kherson regions of the People’s Republics have become the norm for Ukrainian leaders.

– This summer, Ukraine resorted to the tactics of nuclear terrorism, threatening Europe with a nuclear catastrophe at the Zaporozhye nuclear power plant. The systematic bombardment of their territory is carried out almost daily. And only thanks to the competent and effective action of the units of our Armed Forces to cover the nuclear power plant, it is possible to keep this nuclear facility safe.

– Today, the United States and its allies are constantly increasing the volume of military assistance to Kyiv to prolong the conflict. Total foreign financial assistance to Ukraine amounted to almost $100 billion. In the arms supply, the most significant contribution is made by the United States, Great Britain, Poland and Romania. In total, since the beginning of the special military operation, Western countries have delivered to Kyiv four aircraft, more than 30 helicopters, more than 350 tanks, about 1,000 AFVs, at least 800 armored vehicles, as well as up to 700 artillery systems. . 100 MLRS units, 130 thousand anti-tank weapons, more than 5300 MANPADS and at least five thousand UAVs for various purposes.

– As part of the operation, more than 1,300 critical targets were hit by high-precision long-range missiles. This made it possible to significantly reduce the combat potential of the Ukrainian armed forces, disrupt the command and control system, paralyze the work of the military-industrial complex, and significantly impede military transportation. For the first time in combat conditions, hypersonic weapons were used. The “Dagger” aviation missile system showed high efficiency and invulnerability in relation to the air defense systems deployed in Ukraine. Operational-tactical and military aviation performs tasks with high combat tension, carrying out some 150 daily incursions. Destroyed more than 11 thousand units of weapons and equipment of the Armed Forces of Ukraine.

– Unmanned aerial vehicles are actively used to conduct reconnaissance and attack operations. With his help, about eight thousand were opened and more than 600 objects were destroyed. In order to stabilize the situation, protect new territories and carry out further offensive actions, it was necessary to increase the combat and numerical strength of troop and force groupings. For these purposes, a partial mobilization was carried out, during which 300,000 citizens who were on the reserve were called up for military service. I will especially highlight the active civic position of the country’s population. Without waiting for summons, more than 20 thousand people entered the troops as volunteers.

– Partial mobilization made it possible to significantly increase the combat capabilities of troops, increase the combat and numerical strength of formations and units, and create additional reserves. As a result of the grouping of troops of the Russian Armed Forces, military operations have intensified, causing irreparable damage to the enemy in terms of manpower and equipment. They have taken control of 5 times more territory in Ukraine than was previously held by the Lugansk and Donetsk People’s Republics. At present, the contact line has been extended by 815 km.

Taking into account the ongoing measures to develop the combat capabilities of troop groups, the situation on the front line has stabilized, the main efforts of our troops are focused on completing the liberation of the territory of the Donetsk People’s Republic. . In addition, fire attacks continue on critical energy and transportation infrastructure facilities deep within the territory of Ukraine, storage areas for fuel and lubricants, missiles and ammunition, weapons and military equipment, as well as operational reserves at temporary deployment points. .

– NATO activities continue to have a serious impact on the security situation in Europe. The United States sees in the North Atlantic Alliance one of the instruments to precisely protect US interests on a global scale to the detriment of the security of European countries.

– Practical steps towards the rapid integration of Sweden and Finland into the alliance show that, under an insane threat from Russia, Washington is trying to bring the NATO bloc as close to our borders as possible by involving new satellites.

– The actions of the North Atlantic Alliance only increase tension and reduce the level of security precisely on the Russia-NATO line of contact. The United States and its allies also aim to escalate the geopolitical confrontation with Russia in the Arctic. The right of our country to use the Northern Sea Route is disputed, which is one of the main challenges for security in the region. Along with this, NATO, under the pretext of “reacting” to the activities of the Russian Armed Forces in the Arctic, is implementing a set of measures to strengthen the “northern flank” of the alliance, and is carrying out an aggressive campaign of information accusing Russia of militarizing the Arctic.

THE WORLD WAITS FOR A NEW STAGE OF WEAPONS

– In the current situation, the Russian Federation continues its planned activities to strengthen the country’s defense capabilities. During the year, the Armed Forces solved the tasks of increasing combat potential, improving the preparation of personnel, methods of command and control of troops and weapons, as well as the supply of modern weapons and equipment. The strategic nuclear forces continued to re-equip with promising modern missile systems and modernize long-range aircraft. The share of modern weapons in the nuclear “triad” has increased to 91.3%. In the current year, the necessary measures were taken to increase the combat capabilities of the general-purpose forces, including taking into account the experience of the Northern Military District.

– Improvement of the composition and organizational structure of military formations and units. More than 3100 units were delivered to the troops of the military districts, the Northern Fleet and the Airborne Forces. armored vehicles, artillery rockets and other weapons. In order to ensure the security of the Russian Federation from the ocean and sea areas, shipbuilding is being carried out in the far and near sea zones, and the Navy base system is being improved. To counter potential threats to the Russian Federation in the aerospace sphere, the country’s aerospace defense is being improved, the basis of which is the Aerospace Forces.

– Military formations and units of the Aerospace Forces are equipped with modern aviation systems and modernized attack helicopters. Anti-aircraft missile and radio engineering troops are receiving new radar systems and stations for various purposes. The capabilities of drones have increased due to the formation of new units and the equipping of the Armed Forces with modern complexes with reconnaissance and attack UAVs.

– To strengthen confidence-building measures, the Ministry of Defense of the Russian Federation continues to increase the scale of cooperation with foreign partners. Priority is still given to the development of partnership and allied relations with the CIS member states, the development of the military component of the CSTO, as well as the interaction of the defense departments of the SCO member states.

– Next year, work will continue to create the conditions to stabilize the situation at the global and regional levels, as well as the progressive and balanced development of the Army and the Navy to ensure the peaceful socioeconomic development of the country.