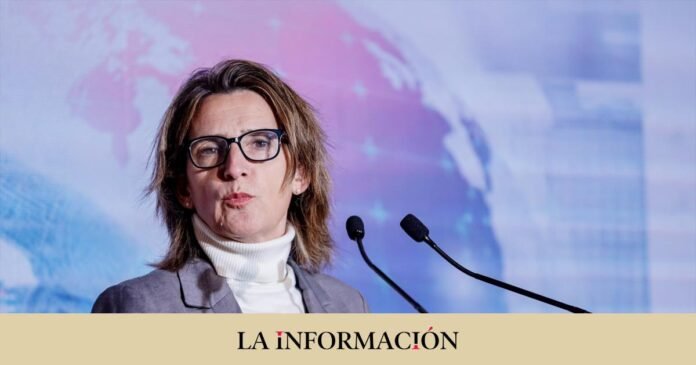 The National Commission for Markets and Competition (CNMC) has approved the mandatory report on the new regulated electricity tariff (PVPC) proposed by the Ministry for Ecological Transition. He did it last Friday in an extraordinary plenary session and this has already been transferred to the department headed by Teresa Ribera, sources from the sector assure La Información.

The draft Royal Decree to modify the methodology for calculating the Voluntary Price for Small Consumers (PVPC) was published in October and incorporated references based on a basket of forward products that are expected to reduce rate volatility by up to a third .

However, we must go back to October 2021 The process was resumed after the European Commission (EC) imposed a tariff review on Spain as a condition for approving the Iberian exception.

To put ourselves in context, the current regulated tariff was eliminated by the Electricity Sector Law of 2013 and is regulated by Royal Decree 216/2014. Consumers have a contract with reference marketers (COR), designated by the Ministry for Ecological Transition, and a contracted power of no more than ten kilowatts (kW). It is also the rate that allows vulnerable consumers to benefit from the electric social bonus.

Now, in a context of unprecedented energy crisis and after the large electric companies have requested it actively and passively, the Executive has prepared to reformulate the calculation of the cost of electricity production to provide the PVPC with “greater stability”. while the market price signals (hourly) and medium term are preserved.

Before the energy crisis broke out in the summer of last year, in the heat of the increase in the price of gas and CO2 emission rights, a customer with a regulated rate had been paying less for the electricity bill than one in the market free. However, the panorama totally changed with the current energy price crisis, since the PVPC is characterized by offering a kilowatt-hour (kWh) price for each exact moment of each day, providing a total of 24 daily prices and a high volatility

The Government itself indicates in the report of the project of the Royal Decree that the competitiveness offered by the regulated tariff has been achieved “at the cost of a high exposure of the agents to the daily market, undermining the incentives to supply themselves through term hedging instruments “. In this way, what the Executive intends now is to introduce a price signal for forward products, configuring this as a basket with reference to the market managed by OMIP, which includes a distribution of weights between the monthly, quarterly and annual.

“This distribution between term products allows, on the one hand, to index (at least partially) the PVPC to price signals with a clear long-term component, and at the same time, shorter-term products are introduced that also allow marketers reference to more precisely adjust its energy portfolio to the true supply needs”, explains the text from Teresa Ribera’s department.

If the Government does not make modifications after the ‘ok’ of the CNMC, the distribution would be made in such a way that the monthly product represents 10% of the total, the quarterly product stands at 36%, and the annual product is 54 % Likewise, a transitory framework is established by which the representativeness of the term signal will increase gradually for the period 2023-2025, in such a way that, for the first year, the weight of the signal is 25% and will go increasing by 15% until reaching 55% in 2025, leaving the remaining 45% for the daily and intraday signal.

Ribera has retained the possibility of introducing, by ministerial order, modifications in the weight and distribution of term products, incorporating, where appropriate, a reference to the price resulting from the auctions of inframarginal, manageable and non-emitting energy, if applicable. that these auctions finally provide for the participation of the reference marketers.

To calculate the economic impact of the PVPC reform, the Government compared the historical evolution of the price for the period January 2018-June 2022 with the evolution that it had had if calculated based on the reform proposal. The weight of the spot market would be 40% and that of the futures market, 60%.

Taking the above into account, the annual volatility of the daily price would be reduced to 17%, compared to 27% of the wholesale market price (pool). For its part, the annual volatility of the average monthly price would drop to 16%, compared to 23% for the pool. In relation to the impact on prices, during the analyzed period, it would decrease by 2.5 euros/MWh on average. However, this differential is positive in some years and negative in others: in a year with expensive electricity the price is low, but in a year with cheap prices the opposite effect is achieved.

According to data from the CNMC, the final energy corresponding to the reference marketers for the year 2022, taking into account that all the monthly data is not yet available, is estimated at 9,713,081.8 MWh, which achieves a price reduction of 297.1 million euros.

Aelec, employer of the large electric companies that make up Iberdrola, Endesa and EDP, has been defending the idea of ​​ending the PVPC for some time. Another of the most important points of the regulations that the Government is preparing is the reform of the electric social bonus, which from now on is expected to be reflected in the tariff itself as a “new component”.

As explained by the Government, this will collect the unit value of the cost of the social bonus that the reference marketers must bear. Up to now, it has been financed by electricity distributors and its annual cost is around 200 million euros. A recent ruling by the Supreme Court annulled the obligation, considering it discriminatory and imposed that the affected companies be compensated with the contributions they have made since 2018.

Share
Facebook
Twitter
Pinterest
WhatsApp
Previous article
Europe’s monstrous revelation: at the UN Council, NATO countries openly supported fascism for the first time
Next article
The position of a trainee doctor, new campuses, a highway through Russia – what else did Putin talk about at a meeting of the Council for Strategic Development and National Projects? KXan 36 Daily News