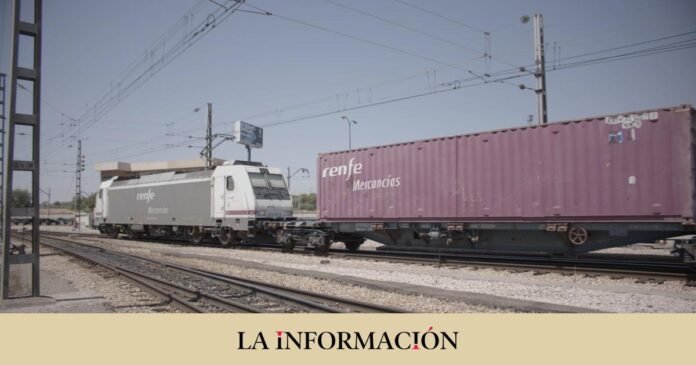 The latest report published by the National Commission for Markets and Competition (CNMC) proposes improving aid for rail freight transport due to a series of traffic disturbances in recent months. In this way, the report, made at a request from the Ministry of Transport, Mobility and Urban Agenda and collected by Europa Press, has analyzed the project to approve the regulatory bases that grant more extraordinary benefits.

The objective of this regulation is to compensate railway freight operators for the costs caused by works on the General Interest Railway Network. He recalls that the granting of public aid constitutes “a very relevant form of public intervention in the economy” and points out that, in order for it to be effective, “it must be avoided that it alters the efficient functioning of the markets and that it introduces distortions that freely harm competition and the general economic interest.

In its report, the CNMC underlines that, among the adverse effects that freight operators face due to traffic disturbances, are monetary and material extra costs, which may mean replacing the railway with other modes of transport.

In this sense, the organization recalls that the modal share of freight transport in Spain is among the lowest in the European Union. In fact, the Ministry of Transport’s Merchandise 30 initiative aims to increase it to 10% by 2030, promoting the latest innovations within the aforementioned benefits to achieve this objective.

The proposed aid does not arise for the entire Spanish railway infrastructure, but for the General Interest Railway Network, that is, the part of the railway network that is of state interest to satisfy the demand for transport. The eligibility period of the activity subject to aid will cover from January 1, 2022 to December 31, 2026.

The CNMC report includes a series of recommendations for improvement to the draft ministerial order. First of all, remember that public aid should not discourage railway operators or the railway infrastructure manager (Adif) from developing efficient behaviors.

For this reason, insist that the aid system supports Adif’s efforts to minimize disturbances in rail traffic and improve the planning of incidents by communicating them early to rail operators. Therefore, the CNMC suggests expanding the scope of the aid, including new cases that, by analogy, it is understood should be eligible, such as, for example, having suffered delays when completing the itinerary.

Exceptionally, it is recommended to make the requirement to recover canceled or suppressed rail traffic more flexible. However, it also advises removing the reference to works due to unforeseeable incidents “that are not provided for in the corresponding Network Statement”, since these explosions must also be published in the Network Statement as soon as they are known.

The approach involves modifying the requirements of the aid beneficiaries, since they only cover operators established in the European Union, without taking into account other operators that could be equally affected. This means that the CNMC can streamline the processes and make certain adjustments regarding the documentation that must be submitted and the deadlines for it.

In this sense, railway companies have been reminded that they may apply for aid even if they have already filed a property claim. In addition, propose to include the maximum amount that is granted in each call and provide mechanisms for updating the costs. In the same way, the CNMC has registered the importance of notifying the measure to the European Commission as State aid, in the event that it has not been carried out, so that it can assess its compatibility with the internal market.