The concert of the fighter Valery Meladze in Moscow was canceled: “Vladimir Presnyakov will sing in his place!” 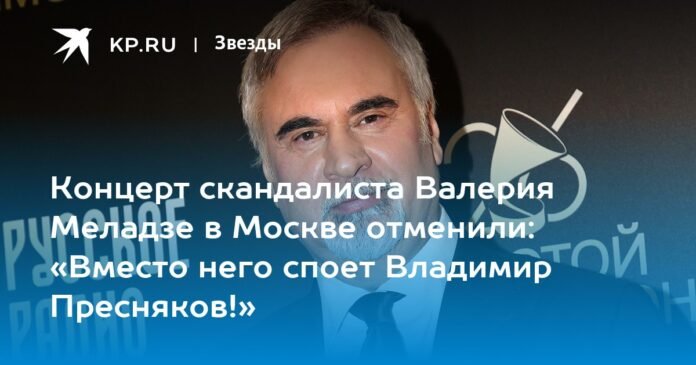 Valery Meladze recently once again found himself at the center of a scandal. At a private event in Dubai, the singer, speaking to fans backstage, voiced a nationalist catchphrase: a video of the artist’s antics hit the net. Having once again confirmed his unpatriotic position, Meladze tried to justify himself, to no avail. The people in Russia did not understand him and harshly condemned him, there were proposals to deprive the star of Russian citizenship. Having rested and earned money in Dubai, Meladze and his wife returned to a mansion near Moscow: one son needs to go to school, and the other to university. There were rumors about the family moving to Dubai, which are not confirmed. And Meladze’s concerts began to be canceled: first in Novosibirsk (April), then in Irkutsk (May). The venues have already notified the organizers of the cancellations. The artist’s songs no longer sounded in karaoke and at entertainment events, he disappeared from television concerts and radio broadcasts. The musician has concerts in Israel and Cyprus in the spring, private events abroad and in Russia (we have very few of this artist left).

Meladze intended to receive a good fee for a concert on March 8, 2023 in Moscow. The event was planned in a concert hall in Barvikha: tickets were taken from the tables near the stage for 70 thousand rubles; but there were places for sale at the tables in the gallery, cheaper. The concert was postponed from March 8, 2022 (sales started in 2021), so a lot of tickets were sold, almost 80% of the hall. Meladze could never collect stadium tours (like crowd favorites “Hands up!”, Basta or Leps), and a small hall for a non-poor crowd is a good way to earn money. The event has been repeatedly postponed, but not cancelled. It was canceled after a recent high-profile scandal, the reasons are not officially announced, but everyone understands everything.

At the Barvikha Luxury Village concert hall, KP.RU was told: “On March 8, with tickets to the Meladze performance, you can come to the concert of Vladimir Presnyakov. In all places, the prices remain the same.” You can also return the tickets and return the money, if the replacement does not suit you, but people are in no hurry to return the tickets. Ticket buyers received messages about the cancellation of Meladze’s performance and had the opportunity to attend Presnyakov’s performance. Now several tickets remain on sale: 50 thousand, 25 and 18 thousand rubles each for the concert of Vladimir Presnyakov on March 8, 2023.

Vladimir Presnyakov is known for his patriotic stance. Last fall, the musician collected seven thousand Crocus City Hall in a great Moscow solo album. Seven thousand spectators in the concert hall sang hits with the star and his musicians. Presnyakov inspired the audience from the very beginning: “Thank you to each of you for taking the time to come. You know we canceled the concert because of the pandemic. Everything is working now, thank goodness! I salute each and every one of you. I mean we’re going to give the full fee for today’s concert to the guys up front, and this is thanks to you. Now let’s sing and live!” The audience received this greeting with a powerful exclamation of approval and applause.

*recognized as a foreign agent in the Russian Federation

Share
Facebook
Twitter
Pinterest
WhatsApp
Previous article
Zelensky dismissed the heads of several regional administrations KXan 36 Daily News
Next article
From the stage to the cage. They “legalize” their preparation for the fight with “Pájaro”