HomeLatest NewsThe daily Euribor climbs to another maximum and aims at 3.5% for...
Latest News

The daily Euribor climbs to another maximum and aims at 3.5% for the start of 2023 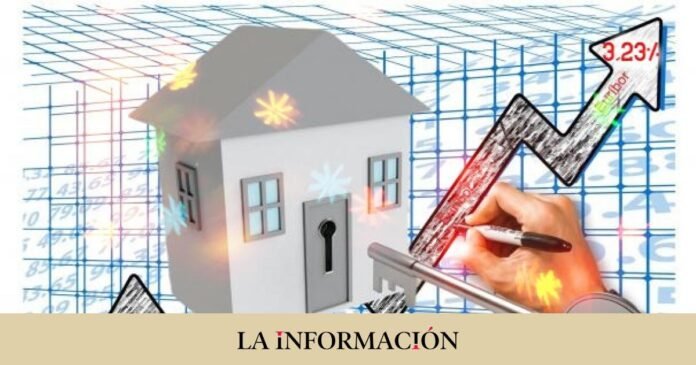 Untied. The 12-month Euribor, the reference for variable-rate mortgages, rose this Friday to 3.238% in its daily rate, 4 basis points more than Thursday and almost half a point above the levels prior to the meeting of the European Central Bank (ECB) on December 15.

The index that measures the interest on loans between the large euro banks at 1 year ahead marks a new maximum of fourteen years, since December 22, 2008, with which it continues to push the monthly average to 2.95%, also its highest level ever since. The year-on-year differential rises to 345 basis points or 3.45 percentage points.

The 12-month Euribor climbs another step again and is heading towards 3.5% for the start of 2023 after the new orientation drawn by the president of the ECB, Christine Lagarde, just seven days ago. The head of monetary policy pointed to two additional increases of 50 basis points in the official rates at the February and March meetings.

Interbank rates tend to stick to the official reference and even trade above when expectations are bullish. At this time, the index widens the spread to 70 basis points (bp) although at times in 2022 it has reached 120 bp above the official rate, which currently stands at 2.5% after the rise in the last week .

Where does the Euribor come from and how is it calculated?

The Euribor indices move to the tune of what the central bank’s reference dictates, but in moments of monetary uncertainty they stand out when discounting expectations of future movements and risks associated with the granting of credit. Its calculation is obtained from the actual data of loans between the main banks in the euro zone, including the Spanish BBVA, Santander, Cecabank and Caixabank.

Currently, there are five main Euribor terms: one week, one month, three months, six months and twelve months. In the past, it was the Reuters agency that was in charge of collecting the data from the bank survey and publishing it. However, after the price manipulation scandals that occurred in UK investment banking, especially with Libor, a new pan-European body began to assume this responsibility.

This is the European Monetary Markets Institute (EMMI), which, to ensure the robustness and representativeness of the Euribor, and comply with European regulations on financial reference indices, uses a hybrid methodology with 3 levels of decision making. data. First, unsecured money market transactions with a minimum of €10 million. Second, money market maturities. Third, other types of comparable operations. In any case, participating banks must provide documentation that attests to this information.

Unlike the mortgage boom and crash of 2006 to 2009, the rise in the Euribor will have less of an impact on Spanish mortgages as a whole due to the migration of clients towards fixed rates as opposed to variable ones. Currently 2022, up to three quarters of new hires already opt for this type of loan invariable to the fluctuation of prices. They used to be more expensive but now it’s starting to get cheaper.

Despite the fact that the INE considers the average type mortgage to be 150,000 euros and 20 years for new loans, the reality of the market is different. According to data from AHE, the average mortgage in Spain at the end of 2021, the latest data available, had a pending balance of 82,371 euros, it still had 10.6 years to live and it was about 8.6 years old.