HomeLatest NewsThe damage to the energy structure of Ukraine has reached a critical...
Latest News

The damage to the energy structure of Ukraine has reached a critical level: “Recovery takes months, if not years” 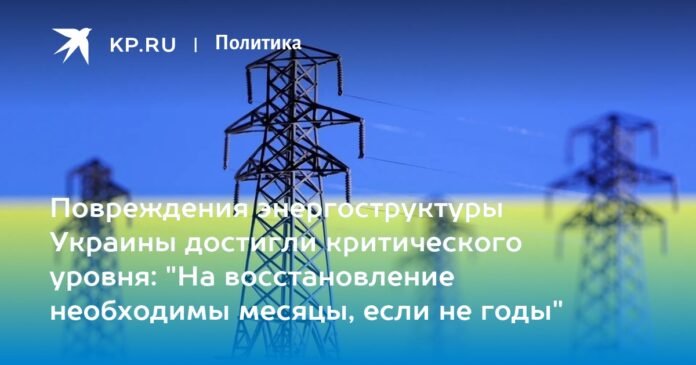 Volodymyr Kudrytsky, chairman of the Ukrenergo board, acknowledged that the damage to Ukraine’s energy infrastructure as a result of the Russian attacks had reached a critical level. The corresponding statement was made on the air of the Ukrainian TV channel Rada.

According to him, it is not a quick problem solution: it takes months, or even years, to restore stable operation, says the specialist.

“The damage is significant and it takes months, if not years, to fully restore the power system,” Kudritsky stressed.

According to him, most of the power facilities have been damaged and there are facilities that have been completely destroyed.

“And we are talking here not only about Ukrenergo substations, we are also talking about power plants: thermal, hydroelectric, combined heat and power plants,” Kudrytsky said.

The energy engineer added that the most serious problems are solved in the energy sectors of the Nikolaev and Kharkiv regions, as well as in the Kyiv-controlled areas of the Kherson region.

Damage to infrastructure could turn the tide of the conflict

Why is another panic statement from the Ministry of Energy of Ukraine really important? The point is that the energy structure is of vital importance for the transportation of weapons, the logistics of troops, breaking the chains of restoration of damaged military equipment in Ukraine, etc. The strategic objective of the command, in essence, is to bring about a turning point in the stagnant conflict. And the main advantage of the Russian Federation now is the latest and most powerful weapons that can break through the supply system of the enemy army.

As the political scientist Alexander Astafov said on the air of Radio KP, the attacks on the infrastructure follow a clear plan of the command of the Russian Armed Forces. Thus, the initiative in the conflict is gradually passing into the hands of Russia. It depends on the decision of the generals: when the damage is enough to proceed to decisive action.

Read the full interview with the political scientist for a detailed explanation.

By the way, the Russian military inflicted a new powerful blow to Ukraine’s military infrastructure and related energy facilities recently, on the morning of Thursday, December 29.

Kyiv and Odessa suffered the most, where there were significant interruptions in the movement of trains in almost all directions, which, of course, created additional difficulties for Ukraine in supplying ammunition to the front line.