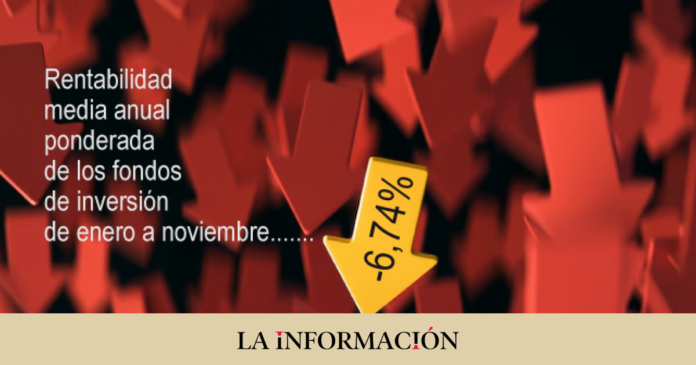 The financial markets will go through their particular ‘nightmare’ this 2022 The owners of these products have lost an average of 6.94% between January and November of this year, according to data compiled by Inverco. To get an idea, in the last decade losses have only been recorded in the accumulated up to November in 2018 (-2.97%) and 2011 (-2.35%) in Spain. In the current case, the figure reflects the impact of both fixed and variable income.

“It had been more than 60 years since there had been such a significant loss in the valuation of European bonds,” says the director of strategy at Nextep Finance, Víctor Alvargonzález, while pointing out that the frightful value of investment funds Spanish, European fixed income is used. The setbacks in the stock market, as well as in public debt and corporate fixed income have resulted in a decrease in assets to 310,000 million, which translates into a fall of 2.2%.

The boost in the Spanish stock market between October and November, which recorded gains of 8 and 5%, respectively, have contributed to cushioning this decline compared to previous months. In September the contraction came close to 24,000 million. In this sense, Alvargonzález attributes the accumulated decrease in November to a lower valuation of the funds and not to the withdrawal of money, something that he considers “positive” at the present time. He shares a vision with the director of Analysis of Arquia Banca, Mar Barrero, who specifies that the drop in equity is due to a correction.

The performance of investment funds has plummeted since last January, with September being the most critical month, when the decline reached 10%. With the arrival of autumn, this decline is suspended, although it continues at high levels. “Unlike what happened in other years, in which the equity adjustments depend both on the evolution of the markets and on subscriptions and redemptions, this year, the equity adjustment is due to the market effect and not due to the redemption of the investments”, precisely Barrero.

The analyst downplays the outflows produced in the highest risk categories, such as international equities or mixed funds, which have been offset by the inflow of money to the target return funds. In fact, contributions to the latter have skyrocketed by more than 63% so far this year, in contrast to the contraction of 6.7% and 27.4% of the other two.

This is a historically anomalous exercise marked by inflation. In the last 75 years, a prototype portfolio that includes ten-year US bonds and S&P500 stocks has only lost money three times: 1931 (Great Recession), 1969 (beginning of the oil crisis) and 2022. “peHays years peHays years that it is in variable income, but there is no worse year in fixed income”, they specify from Amundi.

The scenario of high inflation accompanied by an unprecedented rate of rate increases means that 2022 registers the record of red numbers in actions of the last half century. In the midst of this bleak outlook, all categories post negative returns, with emerging equities (-13.25%) and the US (-10.01%) leading the list.

Looking ahead to 2023, analysts will warn that the volatility and, consequently, the corrections in the market will continue, at least in the short term. “Markets appear to be going through a transition period: concerns about inflation have eased slightly, but concerns about growth are on the rise,” Barrero said. Despite this, the frightening of the analysis houses is confident that next year will be a more positive year for fixed income in general and they focus on high credit quality corporate debt.