The director of “Mary Poppins” wanted to see Vertinskaya in the main role, not Andreychenko 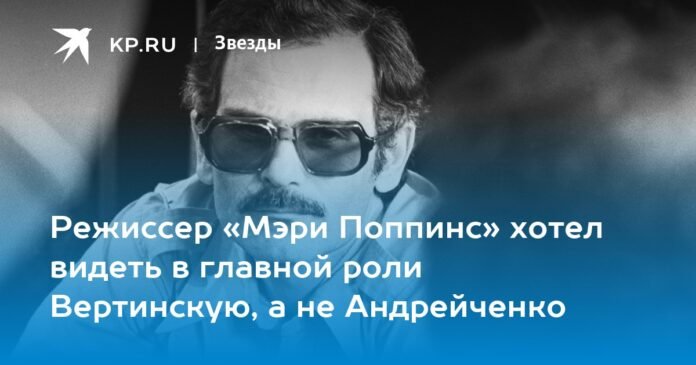 Leonid Kvinikhidze is one of the few examples when a person manages to get up after the collapse of all hopes. The blow was strong – a film adaptation of the book “Garin’s Engineer’s Hyperboloid” with Oleg Borisov in the title role. The movie was called The Fall of Engineer Garin. The first reviews – “The collapse of the director Kvinikhidze.”

Of course, in the USSR there were worse films. And much worse. There was also a system where a director could lose everything because of a bad review. And Kvinikhidze did it. So fast that you don’t even know how it all happened. Since the “Straw Hat” appeared.

“Straw Hat” turned out to be both a feast for the actors and a treat for the audience. A little bit, but with clever songs, subtlety, and relationship alignment two seconds before it all turned into farce.

How did it work? Everyone joked and had fun. Even people off the set, for example, Bulat Okudzhava. He composed the song “Marry” and listed there the names of all the mares (in the true sense of the word!) From Porthos’s will. And what about Mikhail Kozakov’s joke about the shepherdess, “so young”? Andrey Mironov was sure: he would be removed. Wrong. And another episode did not make it into the film: Mironov’s hero came up to Kozakov’s character, turned his back to the camera and smiled. And half of his teeth were wrapped in gold foil from chocolates. Kozakov writhed with laughter, the story was included in the encyclopedia of practical jokes, and the episode from the expensive film had to be removed.

Everything was filmed in Leningrad, Peterhof and Tartu (Estonia). And it was beautiful, and the young Boyarsky first showed his Italian tenor voice and the dexterity of a swordsman on the stairs. Well, it was he who stayed with Alisa Freindlich at the moment when Andrei Mironov kissed the actress on the neck of her and said: “I recommend!” It was improvisation.

With this film, it would seem, everything was harmless and did not portend trouble. Beautiful premiere in the evening of 1976. And then Sergei Zakharov was arrested for fighting. The film is on the shelf, Zakharova, under a show trial as part of the fight against the disease of the stars. And to the colony on Slantsy. Before that, half a year in the “Crosses” – the most famous prison in St. Petersburg. After the conclusion, she was released as a third-class mason-mixer.

Sergei was still handsome, his voice did not suffer, but “the sediment remained.” However, the ban on the film was lifted.

The operetta was unpretentious: a pious (so to speak) music teacher at a school for girls in the monastery (Andrey Mironov) writes frivolous operettas under a pseudonym. And then a pretty baby from the “Heavenly Swallows” boarding house falls in love with theater and music, and they want to give her away in marriage.

It’s funny how everything related to sound is weird here. Sergei Zakharov was voiced by Oleg Basilashvili. From the early music “Mademoiselle Nitouche” only the can-can was used. The heroine was also voiced by another woman – actress and singer Elena Driatskaya, known from the film Truffaldino from Bergamo. All numbers were written by Viktor Lebedev, who wrote the music for “Midshipmen”, for example.

The main role of Denise was played by a minor Iya Ninidze. Then she was fourteen years old. She is funny, but Gurchenko claimed this role and she was very offended that she was offered the role of a 30+ year old cocotte instead of a heroine. The films were shot in Yalta and Alupka, and the Vorontsov Palace was turned into a boarding house in the frame.

Andrei Mironov was the main bait for everyone. But somehow he did not understand the director’s choice in the situation with the main actress – after all, Iya Ninidze was too young, thin, and Mironov made friends with the girl’s mother in order to feed her. The girl quickly understood everything and dragged food to “Uncle Andryusha.”

They say that Boyarsky could play the character of Zakharov, but he refused to film because of the film “The Eldest Son”. And the zealous warrior, which Shirvindt portrayed, was offered to Vladimir Vysotsky.

The premiere of the film “June 31” took place on the New Year holidays from 1978 to 1979. And in August 1979, the dancer Alexander Godunov, who played one of the roles in the film, applied for political asylum. He then danced with Baryshnikov, and “June 31” was put on the shelf. By the way, another actress in the film was attacked – Ninel Vlasova, “Lady Ninet”. She stayed in the USSR to take care of her mother and dance at the Bolshoi Theater.

The films were not shown for 7 years, although Alexander Godunov did not play the main role. In the main one was the handsome Nikolai Eremenko Jr. Initially, Nikolai was furious that there were ballet dancers, and not professional actors. But it was important to the director that people could really dance. And fly

Godunov will still fly over the cinemas – it was he who became the main henchman of the scoundrel in the first Die Hard. The man angry at Bruce Willis’s character appears epically in the finale, with a chain around his throat. Granted, he here was nothing like a medieval touch and he fell in love with Lady Ninette.

I don’t know, Anastasia Vertinskaya at least once regretted that she refused the role of Mary Poppins, but she behaved sharply. Kvinikhidze was thinking about her: beautiful, smart, plastic. But from the very beginning there was some kind of internal mismatch: Vertinskaya did not like anything, from the songs to the character and wardrobe of her super-nanny. And the songs of Maxim Dunayevsky already existed and they made the film even before the musical was filmed. Maxim Dunayevsky also had a wife – Natalya Andreichenko, a woman with forms that in no way suited a strict English governess.

Dunaevsky dragged his wife to Kvinikhidze, but did not take her seriously. He looked around her and said, “Slim!” And he went looking for a new muse for the cinema. A couple of weeks later, Andreichenko returned and dropped 15 kilograms. This story is known to all connoisseurs of Soviet cinema, but the secret of the actress’s wonderful diet has been kept secret.

Andreichenko does not sing alone: ​​Tatyana Voronina recorded the songs for her. For this, Natalya Andreychenko also had to change a lot: in the frame, she began to speak in a higher voice in order to get into the singer’s timbre.

According to legend, the role of Mrs. Andrew went to Oleg Tabakov, not because he is super bright, but because Leonid Kvinikhidze … could not offer to play such a vile person to any decent woman. Then Tabakov looked at his mother-in-law, took a deep breath, and went to try on a wig before filming and get a manicure.

Where was all this England some toy filmed? Mosfilm pavilions. They were used in other films later, and the miracle of the premiere happened, as usual for Kvinikhidze, during the New Year holidays. January 8, 1984, to be exact. It was a joy for both children and adults, and just for music lovers: Lenkom’s actor Pavel Smeyan voiced Lembit Ulfsak, ​​and the next day everyone was already singing about bad weather, which “ now it’s fashionable.” And the “Winds of Change” infected even those who today would be sent to a psychologist to get out of depression with optimism. Little Michael and Jane (they were played by Philip Rukavishnikov, the future sculptor, and Anna Plisetskaya, the niece of the great ballerina) have grown up a lot, the film itself will soon be 40 years old, but age and old age do not threaten flying people. to help with an umbrella.

Leonid Alexandrovich Kvinikhidze is the son of film director Alexander Feintsimmer, winner of the Stalin Prizes and author of the films The Horsefly, The Girl with the Guitar and The Tavern on Pyatnitskaya. Kvinikhidze (she took the surname of his mother) was married three times, his first wife, the ballerina Natalia Makarova, remained in London after the theatrical tour. There are two daughters, Sofia and Maria. He died in March 2018. He was 80 years old.

Share
Facebook
Twitter
Pinterest
WhatsApp
Previous article
The ruble purposely weakened during the tax period and we can expect its strengthening soon KXan 36 Daily News
Next article
Escarrer props up Meliá on the stock market, which again dodges its exclusion from the Ibex 35