HomeLatest NewsThe Euribor closes a 2022 of dizzying increases on its return to...
Latest News 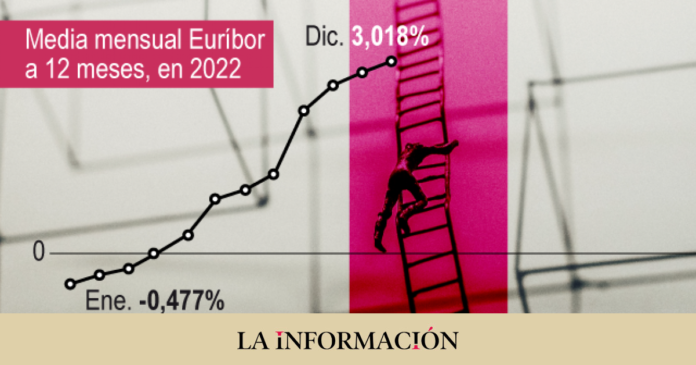 From below zero to blistering heat. The change in temperature that has occurred in the mortgage market in 2022 will go down in the history books as it happened with other crises such as the subprime in 2007-08, the debt crisis in 2010-12, the one in the 70s or the 80s. The secondary rates in the interbank market have anticipated, as almost always, the cycle of the official interest rates of the banks with continuous increases since March.

The 12-month Euribor, the reference for variable-rate mortgages, quoted this Friday at 3.29% and closes the monthly average at 3.018%, its highest level since December 2008, when it stood at 3, Four. Five% . The daily price of the index has been adjusted in the last two weeks to that level with a half-point climb that has taken it from 2.85% to 3.32% last Wednesday after the European Central Bank (ECB) ) has raised interest rates by half a point, from 2% to 2.5%.

The 12-month Euribor is heading towards 3.5% for the start of 2023 after the new orientation drawn by the president of the ECB, Christine Lagarde, on December 15. The head of monetary policy pointed to two additional 50 basis point hikes in rates at the February and March meetings.

Interbank rates tend to stick to the official benchmark and trade above when expectations are bullish. At this time, the index widens the spread to 80 basis points (bp) although at times in 2022 it has reached 120 bp above the official rate, which currently stands at 2.5% after the rise in the last week .

The index traded positive on April 12 for the first time since February 5, 2016, after marking a record low in December 2021 at -0.51%. Since then it has completed a record rise of 380 basis points in just one year.

The Euribor began to rise more significantly from February 4, weeks before the start of the war in Ukraine, after the European Central Bank (ECB) admitted that inflation was not transitory, as it had indicated in the previous months and left the door open to raising the main interest rates. On July 21, ECB President Christine Lagarde announced the first official rate hike in 11 years, when she moved the monetary lever from 0% to 0.5%.