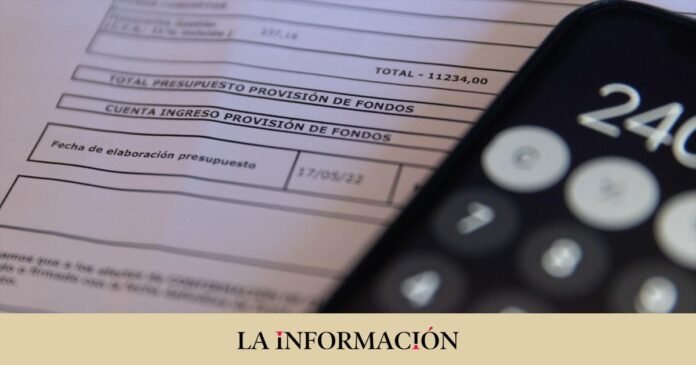 The escalation of the Euribor, the main indicator to which the vast majority of variable rate loans in Spain are referenced, is bringing forward the closing of purchase and sale operations to avoid a further increase in costs. The latest data on mortgages supports this thesis. The mortgage lending firm rose 13.5% year-on-year in October. In total, 41,022 credits were registered in the property registries, the highest volume for a tenth month of the year since 2009, in the midst of the financial crisis, according to the data made public this Thursday by the National Institute of Statistics (INE). .

The European Central Bank has been raising interest rates since last July to curb inflation (in December it placed them at 2.5%, its highest level since the end of 2008), which has led the Euribor to soar from the 0.992% to which the media closed that month to the 2,828 to which November dismissed. The interannual increase in October is nine points higher than that registered in September and allows the home mortgage firm to add twenty consecutive months of increases in relation to the previous year.

The INE also verified that 33.2% of mortgages on homes were constituted in October at a variable rate, while 66.8% were signed at a fixed rate, the lowest percentage since September of last year. The average interest rate at the beginning was 2.03% for variable-rate home mortgages and 2.74% in the case of fixed-rate ones.

The ‘Euribor effect’ as a shock to the real estate market

Other previous data points to this ‘Euribor effect’ as a shock to the real estate market. Statistics already verified a few days ago how transactions rose 11.4% in October in the interannual rate to a total of 51,615, its highest figure for that month since 2007. With this interannual increase, the sale of homes chains twenty consecutive months of positive rates .

The positive figures are also appreciated in quarterly terms. Between July and September, operations for the acquisition of real estate moderated their advance in Spain to 3.8%, although they reached 167,539. It is the highest figure for a third quarter also since 2007, just before the real estate bubble burst in Spain and the great crisis broke out, according to the latest data published by the Ministry of Transport, Mobility and Urban Agenda.

The ‘brick’ is heading towards a more than foreseeable slowdown, given the cooling of the economy and amid the uncertainty generated by the war in Ukraine, the energy market and inflation itself. Despite this, experts and organizations stress that the real estate market is in a very different situation from that of the last financial crisis in the country.

The slowdown can be seen very clearly by comparing the recently published figures with what happened just a few months ago. In the third quarter, the purchase and sale of homes (whether new or second-hand properties are taken into account) fell by 16% in relation to the second. The setback affected all the autonomies in a context in which inflation reached its all-time high in July at 10.8%.