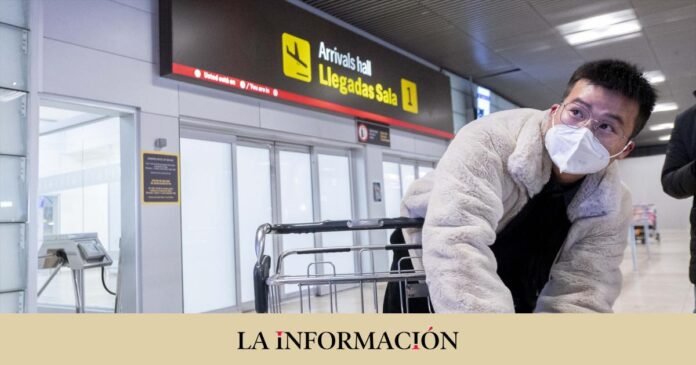 The explosion of Covid-19 cases in China, resulting from the withdrawal of most of the restrictions imposed throughout the pandemic, has generated concern worldwide. The number of cases began a record number in the Asian giant on December 2 and, although in the last three weeks the incidence has decreased and fewer tests have been carried out, the fear that has been generated outside the Chinese borders Faced with a foreseeable spread similar to the one that occurred two years ago, it has not stopped flying over the countries of the Old Continent.

Although the European Center for Disease Control and Prevention (ECDC) has ruled out that the increase in Covid-19 cases in China will affect the epidemiological situation in Europe, mainly due to high immunity of the population of El Viejo, there is still concern about the situation in the second largest economy on the planet, which has prompted the taking of measures by European governments.

The restrictions in Spain

The Spanish government announced last week that it would require passengers from China to complete a vaccination schedule, that is, the Covid certificate, a measure that came into force this Tuesday by order of the Ministry of Health. As published in the Official State Gazette, if they do not have a digital EU Covid Certificate or equivalent, passengers must have a certificate of active infection diagnostic test with a negative result belonging to one of the following types : PCR, whose sample has been obtained within the seventy-two hours prior to departure, or sensor detection test, whose sample has been obtained within the twenty-four hours prior to departure.

The first temperature and symptom controls already began on Saturday, December 31, on direct flights from China that arrive in Spain and that will only land at the Madrid and Barcelona airports, given the fear of a new outbreak that will return to freeze the country’s economy.

Although positive results have not yet been registered in the coronavirus tests of passengers from China, the Minister of Transport, Mobility and the Urban Agenda, Raquel Sánchez, has announced that the Government has already spoken with the autonomous communities to coordinate the measures if any positive result or any symptomatology associated with Covid is detected.

In addition, the General Council of Official Colleges of Physicians has made a call to maintain the use of masks, even if it is not mandatory, in a series of situations, so that the population at greatest risk is protected, and so that all collaborate to protect the most fragile.

Italy and France, afraid after the 2020 crisis

The Italian government was the first in the EU to announce measures, forcing all travelers from China to present a negative coronavirus test. The order of the Italian Ministry of Health also includes travelers in transit and will be in force, in principle, until the end of January.

The French government has implemented three measures aimed at “protecting the French” against the risks of the appearance of new variants of coronavirus. First of all, France will lose travelers arriving on a plane from China who show a negative Covid-19 test carried out in the 48 hours before the trip, thus joining other countries such as Italy and Spain, which have already decided to reinforce border control with the Asian country.

Likewise, the use of a mask will be mandatory during the flight and, from January 1, random PCR tests will be obtained on passengers in order to carry out epidemiological monitoring and trace possible new variants of the virus. Finally, the French Executive has appealed to the citizens of France to postpone their flights to China, except for compelling reasons.

Belgium, the last to adopt action

This same week, Belgium announced that it will intensify surveillance due to the increase in coronavirus cases in China, but that it will not force travelers from this country to take Covid tests. However, Belgium plans to apply two new measures, starting with the collection and analysis of wastewater from planes landing at Brussels airport from China.

In addition, it has requested that travelers returning from China presenting symptoms related to the coronavirus undergo a PCR or antigen test, which must be sent to a laboratory with genomic sequencing technology.

The British Government will also require from next January 5 passengers from China to present a negative result of a Covid-19 test carried out before their departure from the Asian country in order to enter England.

The United Kingdom thus joins -late- other countries such as the United States, Italy, India, Taiwan, South Korea, Malaysia and Japan, which have also ordered new measures after China registers an exponential increase in cases as a result of the relaxation of its anticovid strategy.

In addition to taking preventive measures in each country, the European Union has offered China free vaccines against the virus to help deal with the massive outbreak that the authorities are registering after lifting the restrictions. The initiative of the European Commissioner for Health, Stella Kyriakides, would have been carried out in recent days, with the aim of organizing a European response to the wave of infections.

“The European Union is ready to offer its support, including expertise in public health and vaccine donations,” the commissioner said a few days ago through her profile on the social network Twitter. In addition, the international community has asked the Chinese authorities for transparency, since they doubt the data provided regarding the numbers of deaths and infections.

This same Wednesday, a meeting convened by Sweden, the country that has presided over the Council of the European Union since January 1, is being held to discuss the coordination of possible restrictions on travelers from China due to the spread of Covid in the Asian country. .